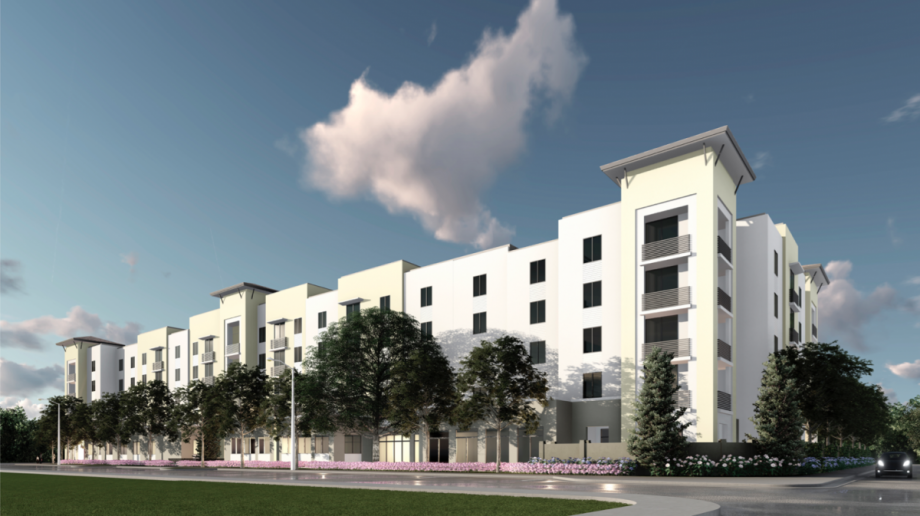 At the end of the 2016 school year, over 5,000 Miami-Dade school children were registered as homeless. The heartbreaking phenomenon is largely an invisible problem — without a stable address, kids shuffle from school to school, social networks fray and families fall off the radar of communities that could support them.

But while others may not detect the signifiers of a child who has no consistent place to sleep, Constance Collins, the president and executive director of Lotus House, the only Miami homeless shelter with wraparound support services exclusively serving women and children, can’t unsee them. Then again, the attorney, whose organization is opening a $28 million facility later this year, isn’t your standard shelter operator.

Collins worked as high-powered real estate developer and investment advisor for ​two decades before a conversation with a woman bathing in a fountain in front of one of her upscale Coral Gables projects spurred her to leave commercial development behind and focus on helping homeless women and children.

In 2004, the former principal and part-owner of Starwood Urban Investments started the Sundari Foundation​ to provide holistic support empowering women to get back on their feet. In 2006, the foundation opened Lotus House. Through a trauma-informed approach, Lotus House and the new Lotus Village development slated to open in December, aim to bring stability and help these families escape childhood abuse and domestic violence.

Until now, the Sundari Foundation has been able to serve 250 women and children daily and 680 annually at Lotus House. Lotus Village will have room for nearly double the number of people in a state-of-the-art facility that marries Collin’s background in mixed-use real estate development with her strong belief that the only way to solve homelessness is by giving people the services they need to prevent it from happening in the first place.

“Lotus Village will be a role model for how cities can bring an end to homelessness with enriched shelter and support services that address the needs of the most fragile among us,” says Collins. 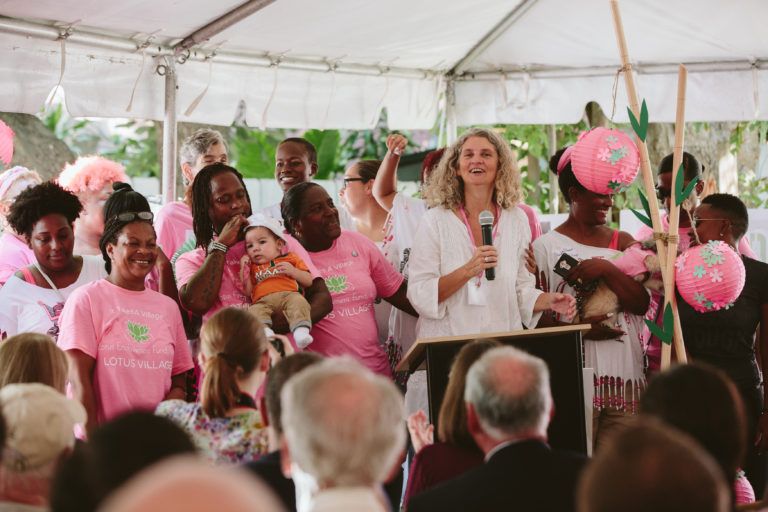 Designed to blend into its Overtown neighborhood, Lotus Village will feature courtyards with a vegetable garden, space for exercise, yoga and meditation, computer labs and a teaching kitchen, as well as 140 living units and a shared dining pavilion. Inside a well-lit, modern commons area, there will be a daycare and full heath clinic with pediatric and women’s wellness services accessible to all Overtown residents, not just those staying at Lotus Village. Collins says the foundation’s trauma-informed, holistic approach guided the site’s programming and design.

“We’re adding the opportunity for expanded, enriched therapeutic programming and support services, as well as what I call ‘alternative pathways to healing,” Collins says. “So art and activities, the salon, the computer library providing education, and a working classroom kitchen with job-readiness training. Those kinds of things are not traditionally thought of in the context of a homeless shelter, but I’m a believer that if we start having the conversation about how to invest in those with the least, to educate, to support, to provide access to tools and resources, then the outcomes are different.”

But while the new facility will allow the organization to test its innovative approach, the chief driver for its construction is an unprecedented need.

“There is a constant and growing demand for shelter with enriched support services for women, youth and children who are experiencing homelessness,” Collins says. “That’s the first driver for us, this enormous demand. We were turning away, and still are, over 2,000 women and children annually.

Juliana Lima, now 41, said Sundari’s facilities have never just been shelter. For her, Lotus House was home for nearly two years. In late 2014, Lotus House took in her and her then 8-year-old daughter — who had been abused by her father at the age of four. They recovered within its walls, going through therapy sessions as Lima also recovered from back surgery — part of the reason they ended up at Lotus House in the first place; she lost her job because she couldn’t work due to back problems. But Lima took advantage of Lotus House’s job training, enrolling in the retail training program (she said some of her friends took the barista training classes). This past fall the staff at Lotus House helped Lima and her daughter find an apartment — walking her through the steps, helping with the application, ensuring she landed on her feet. With her back on the mend, she and her daughter are living on their own as she looks for work.

“It was a really good sense of community,” she says. “They help you with everything. Every single thing. It’s not only for people who lose their place. They have rehab for people who have problem with drugs and alcohol. Domestic violence. PTSD. It was like college. Because I learned how people live.”

Thankfully Lotus House didn’t deal with the pushback that some communities often do when shelters want to expand. In Brooklyn’s Crown Heights neighborhood, needed shelters are being held up in courts by NIMBYs who are, they say, fighting for the character of the neighborhood. Collins says her Lotus House team had nothing but support from the surrounding community, with the exception of a handful of mostly quiet dissenters and some initial pushback from City Commission Chairman Keon Hardemon. Today, the commissioner is fully behind Lotus Village.

“Lotus House provides a great service to our community,” Hardemon said last summer. “It’s an agency that’s important to the fabric of Miami. I believe that them having the ability to serve more people will benefit those in the program and the city of Miami.”

Collins said Lotus Village could not have happened without the support, both from the city lawmakers and community members.

“Had we not had hundreds of people sign on from the neighborhood who were in support of the project, I don’t believe we would even be where we are today because these rezoning issues are very sensitive issues in communities,” Collins says. “No one likes the thought of a homeless shelter. And frankly, the fact that we designed something that doesn’t look like a homeless shelter was also instrumental.”

The 120,000 square foot facility comes with a $28 million price tag financed through New Markets Tax Credits and private philanthropic dollars, including gifts from the Braman Family Charitable Foundation and the Micky and Madeleine Arison Family Foundation. Collins said that the organization’s decade-plus of institutional knowledge allowed them to outfit the space for their needs.

“We worked very closely with architects to design and program the space in the way that we would like it based on a decade of experience of operating and knowing exactly what we needed and wanted,” she says. The result, when it opens at the end of this year, could help shift the conversation about how to shelter the homeless.

“Now we have a chance to really break the cycle of homelessness,” Collins says. “So first and foremost, on a service level, the village offers us the opportunity to really realize a vision we have had for a long time of providing a trauma-informed, holistic and supportive environment that nurtures people to grow and to build safer lives for the future.”

Lima, who moved out in October of last year, is proof that Lotus House works — from the therapy and job training to the yoga and child care — in a way that other shelters could learn from.

“It was my home for two years,” she says. “My daughter was in love with Lotus House. They were amazing with her. I don’t have much money, but I have everybody. We come by to say hi at least once a week.”

This article was co-edited by Gregory Heller. Heller is executive director of the Philadelphia Redevelopment Authority, where he focuses on the intersection of real estate and social impact. In 2015, he presented a talk at TEDx Philadelphia on social impact real estate. He is a Next City Vanguard and was recently named a member of the 2016 Urban Land 40 Under 40, which recognizes the “best young land-use professionals from around the globe.”