Miami Is Testing a Half-Mile of Red, Green and Slower – Next City

Miami Is Testing a Half-Mile of Red, Green and Slower 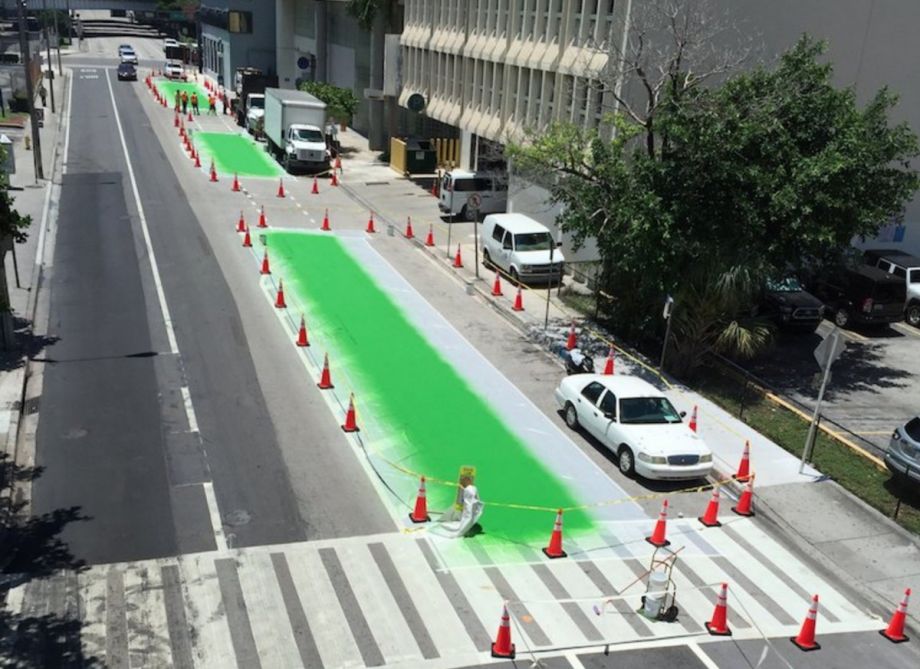 (Credit: Miami Department of Transportation and Public Works, via Twitter)

Despite the abundance of sunshine and near total lack of hills, Miami is not a great place for bicycling or walking. In recent years, it has regularly ranked high among U.S. cities with the most cyclist and pedestrian fatalities. City officials want to move beyond that dubious honor.

“I’m feeling encouraged. The impact of this project alone may not seem like much, but a lot of little things add up to a bigger-picture movement,” says Tony Garcia, a board member with nonprofit Green Mobility Network and principal at urban planning firm Street Plans.

Though other parts of the city have a few bike lanes, downtown only had off-street trails and sharrows. The new 1st Street bike lane is a traditional painted lane with no physical separation.

“Riding in Miami is pretty brutal. You deal with a lot of ignorant drivers who think we should be on the sidewalk when we’re riding in the street,” Garcia says. “In terms of the physical infrastructure, it is simply not there. But it’s getting better.”

Of course, a half-mile of bike and bus lanes alone won’t have any major impact on cycling and transit in the city. But Garcia says he was particularly encouraged by the political support this complete streets project received and is hopeful it is a sign of things to come.

According to Luis Espinoza, a special projects administrator with Miami-Dade County, the Department of Transportation and Public Works (two departments merged into one last year) has plans to create two more complete streets after the 1st Street pilot is complete.

The city will also get its first protected bike lanes soon. Green Mobility Network and Miami-Dade County partnered to create a quick-build program. Similar to other city-sanctioned tactical urbanism programs, it allows residents to propose low-cost street improvements that the city funds and assists with.

Green Mobility Network is building 7 miles of protected bike lanes through the program between now and May 2018. Garcia says they are “using the tactical urbanism methodology to try to get the county to understand they don’t need to spend millions of dollars and many years to make these changes.”

He’s hoping that the quick-build protected bike lanes catch on and create a constituency of Miami residents asking for more of them. It seems plausible. A Miami Downtown Development Authority survey found that 60 percent of people who live in or near downtown said they would bike to work if “they had access to the proper facilities and infrastructure.”

“The ideal outcome is a significant expansion of our trail network and the wide-scale adoption and construction of protected bike lanes all around the county,” Garcia says. “The constituency is building and growing in a way that never has before. I think our policymakers and planners are just trying to catch up.”

The 1st Street pilot project is slated to last for a year. The city will decide at that point whether or not to make the complete streets changes permanent. “We will make that determination once we finish analyzing lanes usage data, safety and traffic improvements, and other impacts during the pilot project,” Espinoza says.