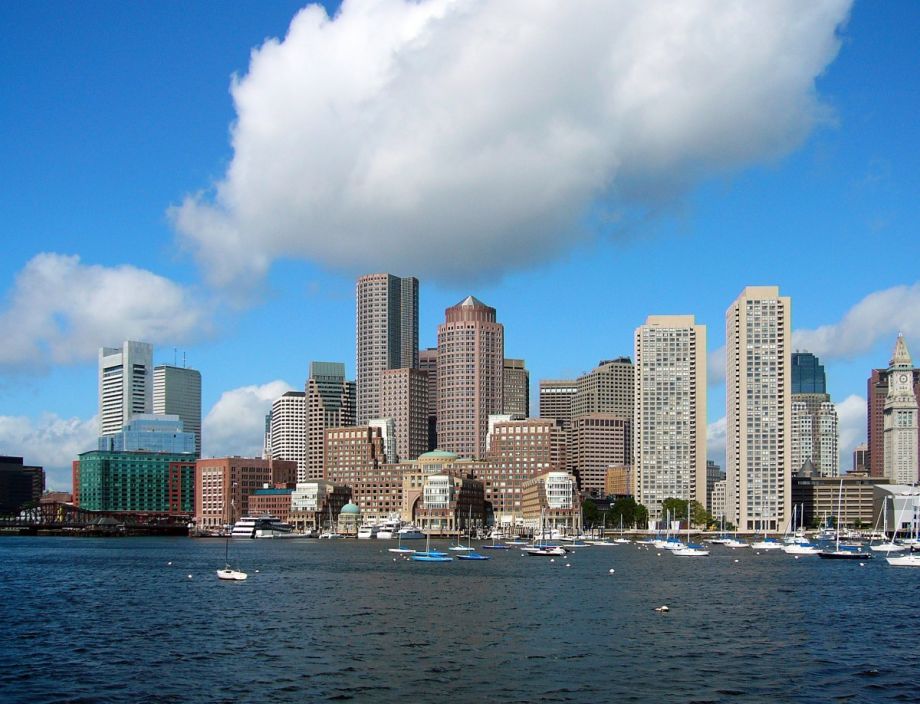 Boston has the third-highest share of walkable area in the 30 biggest U.S. metros, and is seeing the second-largest growth in development in walkable areas. (Photo by Nelson48 via Flickr)

D.C. slipped behind New York City, losing its previous No. 1 ranking in a fresh look at walkability in America’s 30 largest metros out today. “Foot Traffic Ahead: 2016,” from Smart Growth America, a D.C.-headquartered advocacy group that’s anti-sprawl, urges people to forget the old cliches about unwalkable suburbs and stop thinking that urban cores are the only place a pedestrian can find any joy. The report concludes that walkability can be — and is being — achieved everywhere, even in traditionally car-dependent suburban areas. To get to really walkable cities, the authors say, we’ll have to focus on both.

As with the original edition, released in 2014, the report uses the term “WalkUPs,” or walkable urban places. These can be a classic downtown core, a redeveloped strip mall, or a university district, so long as they meet a few criteria. WalkUPs are not defined as just dense residential areas, and “Foot Traffic Ahead” puts a premium on “regional significance.” So the areas must boast a WalkScore above 70.5, have an average intersection density at or above 100 per square mile, and contain 1.4 million square feet or more of office space, or 340,000 square feet or more of retail space. In other words, they are both walkable and draw people from outside the immediate area.

“What we’re seeing two years later with Foot Traffic Ahead 2016 is a continuous growth and expansion of walkable urban places across the country,” co-author Chris Leinberger, urban real estate at the George Washington University School of Business, said in a press release. “In fact, the WalkUPs in each of the 30 metros examined were found to have gained office, retail and rental multifamily market share against drivable sub-urban competition in the current real estate cycle, the first time we have seen this in almost 60 years.”

The report lists 619 WalkUPs in the 30 largest U.S. metro areas. The six metros with the most are, in order, New York, Washington, D.C., Boston, Chicago, San Francisco and Seattle. By this metric, metros are ranked based on the percentage of occupied walkable urban office, retail and multifamily rental square feet in their WalkUPs, compared to the occupied square footage of the metro as a whole. (The division of Smart Growth America behind the report is Locus, a coalition of real estate developers.) 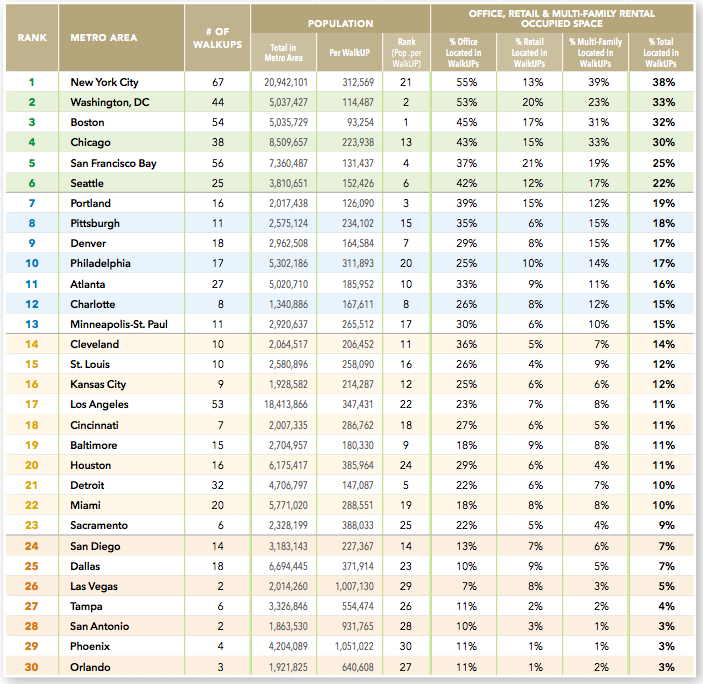 The report also ranks metros by the change in the market share of multifamily rental and office space in WalkUPs as opposed to less walkable areas between 2010 and 2015. In Boston, for example, the city’s 54 WalkUPs occupied just 1.2 percent of the metro area’s total acreage, but absorbed 93 percent of new office and multifamily rental square footage. WalkUPs thus play an outsized role in the economic health of metros, according to the authors, again regardless of whether they are in the center city or the suburbs. Metro Boston has experienced urbanization of its suburbs, including Cambridge, where 41 percent of its WalkUPs are. Boston ranks second in the “development momentum ranking” — just after New York — indicating that both share of walkable areas and the rent premiums achieved in these areas on the rise.

Seattle and D.C. also, predictably, rank in the top seven for development momentum. So do Detroit, Phoenix and Los Angeles — cities not typically associated with walkability. But all three are seeing growth in the share of new development happening in WalkUPs, with a significant percentage — 29 percent or above — happening in suburban WalkUPs.

The report also ranks metros by social equity factors, including transportation and housing costs as a percentage of moderate household income, and the number of jobs located near a resident. WalkUPs, the report finds, are performing better economically than drivable suburban developments, with a significantly higher proportion of college graduates over 25 years old and a higher GDP per capita, two metrics typically associated with gentrification. Office space, retail and multifamily rental properties in walkable areas are also seeing large and growing rental rate premiums over drivable suburban areas.

But the report finds, perhaps counterintuitively, that they’re also more socially equitable. Housing costs are high, and highest in the metros with the highest walkability rankings. In the six most walkable metros, multifamily rents in WalkUPs are 93 percent higher than the average drivable suburban rent per square foot. But the income-to-rent ratio varies less than might be expected between more walkable metros and less walkable ones: Moderate-income households in the top six metros spend 41.8 percent of their income on housing, compared to an average of 40.9 percent in the seven least walkable.

When it comes to transportation costs, though, the difference is larger. Moderate-income households in the most walkable areas spend 19 percent of their household income on transportation, 9.6 percentage points lower than in the least walkable metros. They also have significantly higher access to employment. Using these three metrics — housing costs, transportation costs and job access — New York, D.C., Boston, San Francisco Bay, and Minneapolis-St. Paul take the top five spots for social equity.

The report concludes, however, by cautioning that the high housing costs in these communities threaten that equity and must be addressed through “attainable housing programs.” It also predicts that Detroit, Phoenix, Los Angeles, St. Louis, Miami, Atlanta and Cleveland display the greatest indications that they’ll develop a walkable urbanism.