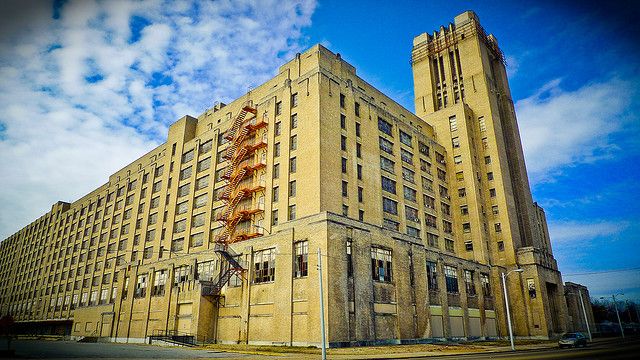 Preservationists in search of good news this month can turn to Memphis, where the city council voted unanimously to shell out $15 million in local, state and federal funds for the Crosstown Redevelopment Project.

The vacant Sears Crosstown building, constructed and expanded in phases between 1927 and 1965, will be transformed into a $175 million mixed-use project. Sears stopped retail operations there in 1983 and the building has been abandoned since the company closed its distribution center in 1993. Blight has marred the neighborhood, now one of the poorest in Memphis, ever since.

The 1.5 million-square-foot development will have everything from gyms to a public high school focused on arts and sciences. Health care, however, seems to be its focal point, at least in the beginning stages. The Memphis Business Journal has a roundup of tenants already committed — they’ll take up 600,000 square feet on day one — and four of them are health care companies or hospitals, including St. Jude’s Research Hospital.

Memphis-based developer Crosstown, LLC, bought the sprawling complex in 2007. It expects to begin construction in the spring and finish by “mid-2016.”

University of Memphis art history professor Todd Richardson, one of Crosstown’s partners, was predictably excited about the green light on funds from the city. “We have made history,” Richardson said in a press release. “The Crosstown project will be a nationally recognized example of how to reimagine and repurpose historic structures for vibrant, productive usage.”

Health care and education is certainly a better use of abandoned historic buildings than, say, a go-kart track — an idea floated by Fernando Palazuelo, the developer who won a bid on Detroit’s Packard Plant. His two eldest sons were apparently “high-ranked go-kart racers.” Competitive go-kart racing aside, Crosstown has the potential to become an economic engine for the city.

An economic impact study from the city’s Housing and Community Development division found that the building can support 1,300 jobs, 875 of which will be new jobs, generating annual wages over $37 million.

But what I find most promising here are the tenants. It’s not some urbanist’s rendered paradise filled with tech companies and coffee shops and incubators (though those could certainly come). Instead planners have looked to education and health care. It’s the latter, an anchor institution like St. Jude’s, that can help drive the economy and make Crosstown more than a developer’s pet project.