Semifinalists Announced in “Memorials for the Future” Competition – Next City

Semifinalists Announced in “Memorials for the Future” Competition 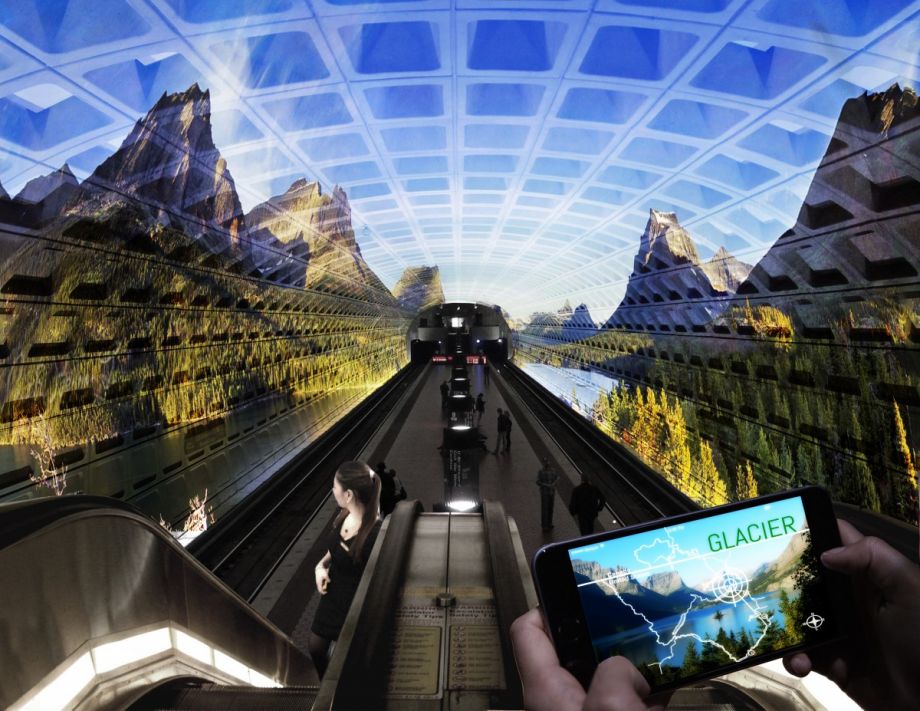 “American Wild: A Memorial,” one of the semifinalist designs, would project high-definition visuals of the 59 national parks onto the interior of D.C. Metro stations. (Credit: Van Alen Institute)

Thirty semifinalists have been announced in the “Memorials for the Future” design competition, an open call that invited teams to submit ideas not only for new memorial forms in Washington, D.C., but also for new memorial concepts, reports Architect Magazine. Initiated in April by the National Park Service, the National Capital Planning Commission and the nonprofit Van Alen Institute, the competition’s novelty lies in this open-endedness: The public is being asked what to memorialize, how and why, raising questions about which histories public monuments have privileged in the past, and what public concerns merit memorialization into the future.

In this first round, 30 proposals have been chosen as semifinalists out of 89 submitted projects. “We saw a huge variety of projects and approaches,” jury member Mark Gardner, principal of Jaklitsch/Gardner Architects in New York, told Architect Magazine. “The competition called for diversity, and I think the designers really answered that request.” Many of the designs break from traditional forms to propose virtual memorials accessed by smartphones, pop-up memorials that engage people in conversation about the past and future of their neighborhoods, and dispersed memorials that take the monument off its pedestal, incorporating remembrance into the daily life of the city.

The designs also took on a multitude of histories and subject matters, from Japanese Internment to the Underground Railroad, from democracy to biodiversity, from immigration to grief, even the late musician Prince. The competition is anchored by the belief that traditional memorials, like the granite, marble and limestone monoliths that dominate D.C. today, may not speak to or resonate with an increasingly diverse population, in design or content.

“In a way, Washington, D.C., is a collective memorial that tells the story of the country’s history, and represents a number of people and their stories,” Gardner said. “This competition is an opportunity to provide a voice for the changing population of this city,”

“Climate Chronograph,” proposed by Erik Jensen and Rebecca Sunter, envisions a “memorial for the future rising sea.” Their design consists of a platform surrounded by water and planted with a grid of cherry blossoms. As sea levels rise, the trees on the edges will die in place, creating a visual catalog of former shorelines and representing the displacement of people as a result of climate change.

The design “Memorial to Victims of Gun Violence in America,” proposed by a team led by Jessica Jamroz, visualizes the toll of gun violence in each of the 50 states using water. Each state would be represented by a fountain, whose activity would be dictated by gun violence statistics in that state, waters building up and “becoming more turbulent with [each] loss of life.”

Several proposals would invite residents to participate in their own remembrance projects. “Neighborhood Memorials” is a concept for distributed, site-specific memorials utilizing existing infrastructure like bus shelters and park trees. Residents would be engaged to create content using low-cost exhibition materials like portable projectors and even sunlight, in the form of shadow art. Other proposals call for viewers to become participants, submitting images or text via their smartphones.

About half of the submissions were site-specific to Washington, D.C., but the rest could be located in other cities. “The benefit of having certain memorials be mobile is that there are different experiences within other settings,” Jessica Lax, associate director of competitions at the Van Alen Institute, told Architecture Magazine. “Some peoples’ stories are not always heard, so in bringing the memorial to them, that can be achieved within that setting.”

Three finalists will be announced on June 8. Each will receive a $15,000 stipend and strategic assistance to research and design their final proposal. The winner will be announced in the fall, though winning doesn’t necessarily guarantee that the project will be constructed. As Kriston Capps of CityLab noted when the competition was announced, “The contest is purely for honors, not to produce a built memorial. But any memorial starts with a grassroots campaign. A gripping memorial design associated with Black Lives Matter, for example, or Vision Zero — or abortion or suicide or gun violence or drug abuse or really any controversial subject in life — could generate its own momentum.”