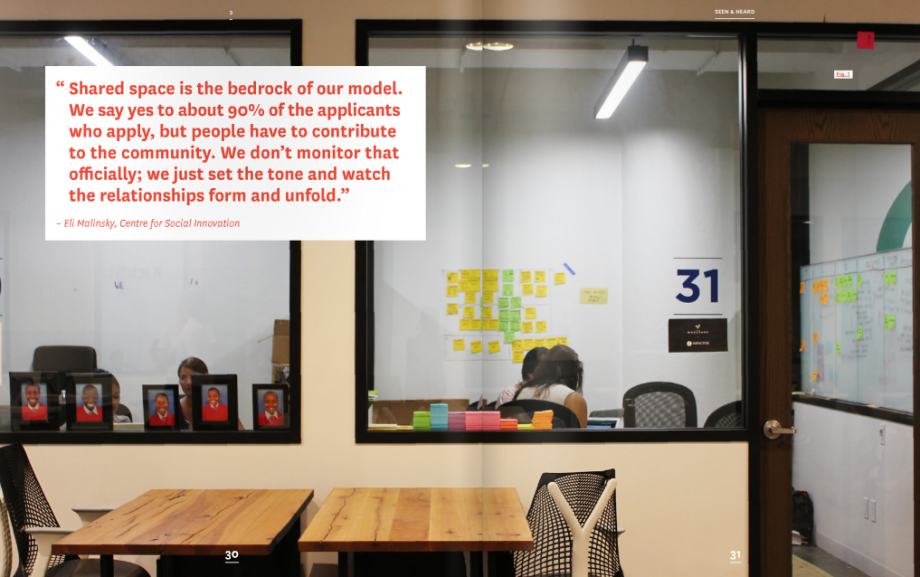 A page from an innovative spaces road-trip report, “Searching for Necessity” (by designers Megan Deal and Kate Creason)

Last summer, two partners from Cincinnati design shop Tomorrow Today hit the road to tour the innovative spaces — co-working spaces, civic spaces, maker spaces, incubators — that have popped up around the country, especially in recent years. Megan Deal and Kate Creason hoped that by looking at a critical mass of these spaces, they’d discover insights into why some places seem to sustainably function as spaces that are neither purely business nor residential, nor shared-by-statute like public parks are, nor even the sort of free and unstructured quintessential third place. They also wanted to see if successful spaces shared replicable qualities.

Deal and Creason hit 30 spaces in 11 cities, and poured the lessons of that work into a 170-page, richly designed report called Searching for Necessity. Deal also recently talked about what she and Creason learned at the FutureShift Festival in the U.K., where she spoke about three of the places they visited: the Glass House Collective, a Chattanooga outfit that focuses on a very small slice — one mile of Glass Street — in that Tennessee city; the Big Car Collective, located in an Indianapolis mall parking lot; and D:hive, a storefront gathering center in Detroit’s main business district.

So what’s the secret sauce? As Deal describes it, it often involves a curious internal dichotomy. On the one hand, these sort of spaces tend to do best when they’re operated by a well-distributed team made up of not only staff with defined roles but engaged community actors, all working to create ties to other locals, firmly plant the organization’s footprint in the city, and spread the spaces brand — and all the better if it’s a vibrant, polished brand; indeed, each of the places Deal detailed in her talk have spiffy logos and verging-on-gorgeous brand identities less akin to those of your traditional rec center than to that of a design-minded startup.

At the same time, though, this sort of space tends to be the manifestation of the ambitious vision of one founder or, at most, a pair of co-founders. One reason that might be useful is that Deal and Creason identified another characteristic of success: having a clearly articulated central focus. They needn’t be über-specific, it seems, but they should at least go beyond a simple declaration that one is, indeed, an innovative space. To wit, we get,

“Big Car is a nonprofit arts organization with a collective of artists, writers, musicians and active citizens who work together on projects and programs in the community”

“The D:hive is a physical storefront and welcome center in Detroit’s Central Business District where you will find help with anything Detroit”

One of the things that even good spaces aren’t great at, suggests Deal, is learning to think on paper, as in putting down in writing their plans and later circling back to examine how well they worked. Luckily, there’s now a report that should help a bit. Indeed, one of Deal and Creason’s findings is that, as unique a flower as each innovative space usefully believes itself to be, there’s a great deal they could be learning from one another. They visited 30 spaces, said Deal, but so similar were their challenges and opportunities they probably could have stopped at 12 or 15. Here’s that full report: