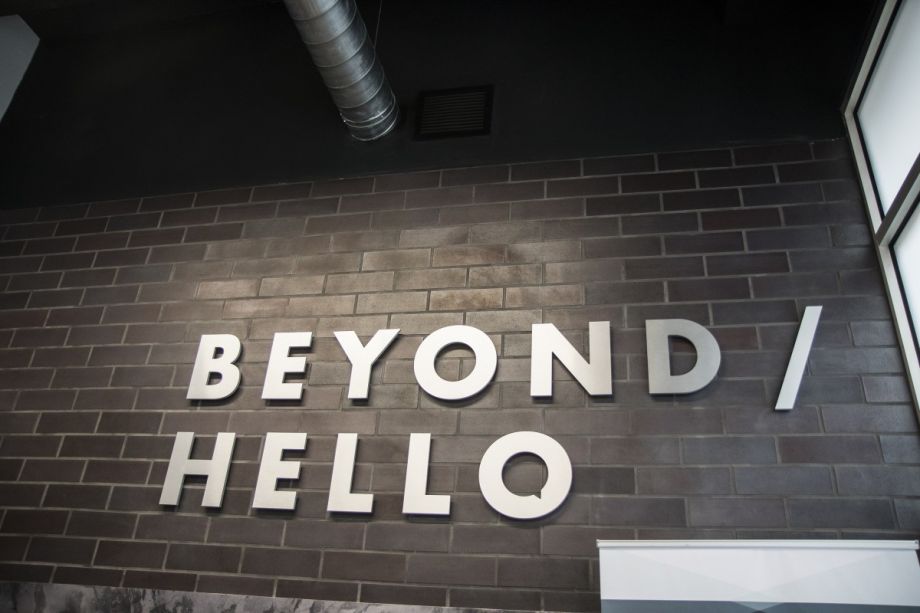 The entryway sign at the new Center City BEYOND / HELLO location in Philadelphia. (Photo courtesy of BEYOND / HELLO. Bob Neroni.)

Half a dozen employees at BEYOND / HELLO were lined up in branded T-shirts and lanyards in the lobby of their new dispensary in Center City Philadelphia Thursday morning, facing a row of news cameras under an archway made of balloons. They had pushed the leather chairs into a corner of the waiting room and stretched out a six-foot length of blue ribbon. Blythe Huestis, the president and director of retail operations, held an oversized pair of scissors to the ribbon and, once the cameras were ready, snipped it in half. Reporters handed over their IDs to be photocopied and walked into the dispensary to have a look around. There were no customers yet. It was bright and clean and smelled like weed.

BEYOND / HELLO is not the first medical marijuana dispensary in Philadelphia, but it is the first one downtown. The company, which sources its products from growers in Colorado and Arizona, has another dispensary in nearby Bristol, and licenses for several more around the state.

“You want be very cognizant of the individual cities that you’re going into, making sure that you’re talking to neighborhood associations,” Huestis told Next City. “You just need to dot your I’s and cross your T’s … Fortunately, people were pretty receptive to this, so I think Center City is ready for this.”

It’s probably an understatement to say that Center City is ready for a medical marijuana storefront. Still, the state of Pennsylvania is approaching full legalization by baby steps.

Democratic Governor Tom Wolf signed a bill creating a medical marijuana program in 2016. But last summer, a few months before he was handily re-elected to a second term, Wolf told a Pittsburgh radio station that he didn’t believe Pennsylvanians were “ready” for recreational marijuana. In December, he indicated that he was open to a “conversation” about further legalization. And on Thursday afternoon, Wolf and newly elected Lieutenant Governor John Fetterman held a press conference in Harrisburg announcing that Fetterman would go on a “listening tour” to all 67 Pennsylvania counties to hear what Pennsylvanians think about marijuana laws.

Wolf has repeatedly said that Pennsylvanian should see what happens in neighboring New Jersey and New York, which are both moving more quickly toward legalizing recreational marijuana, before overhauling its laws. At the press conference, Fetterman, a progressive who advocated for legalizing recreational marijuana during a 2016 primary campaign for Senate, said his views are subordinate to Wolf’s, and that both of their views are subordinate to those of Pennsylvania voters. Fetterman says he wants to hear what every resident with an opinion has to say about legalization.

Polling suggests most Pennsylvanians support legalizing marijuana for recreational use — 59 percent, according to a Franklin & Marshall College poll conducted in 2017. And some prominent officials back recreational legalization as well. Last summer, State Auditor General Eugene DePasquale released a report estimating that 800,000 monthly cannabis users in Pennsylvania spent an average of $2,000 a year on products. With a 35 percent tax, the state could generate up to $580 million a year, DePasquale suggested.

Employees of BEYOND / HELLO, led by President and Director of Retail Operations Blythe Huestis, cut the ribbon at the company's new medical marijuana dispensary in Center City Philadelphia. (Photo courtesy of BEYOND / HELLO. Bob Neroni.)

The apparently strong public support and revenue potential aren’t the only reasons officials have to consider legalizing recreational marijuana. While some dispensary operators are beginning to profit off marijuana sales, other Pennsylvanians are still imprisoned or on parole for marijuana-related crimes. Last September, Jake Wheatley, a member of Pennsylvania House of Representatives representing Allegheny County, introduced a bill that would not only legalize recreational marijuana but immediately release people serving cannabis-related sentences.

The bill didn’t go anywhere, but Wheatley plans to reintroduce it this year. Steven Williams, a research analyst for the Pennsylvania Democratic Caucus House Finance Committee, of which Rep. Wheatley is the chair, says the language in the new version is still being finalized.

It will carry over provisions from the original version which would direct some of the new marijuana tax revenue to expungement services and jail diversion programs, Williams says. And the reintroduced bill will also include new provisions, directing some revenue to student loan forgiveness and to a state affordable housing fund. The point is to create a comprehensive program that addresses injustices related to marijuana laws and invests in social services, in addition to simply permitting adults to smoke weed legally, Williams says. The bill could be reintroduced in the next weeks, Williams says; it currently has 12 co-sponsors.

Whether or not Wheatley’s bill advances, Pennsylvanians can expect more marijuana news in 2019. Fetterman says he hopes to start his listening tour immediately, and have it completed in the next few months. Also on Thursday, Philadelphia City Councilman Derek Green introduced a bill that would let Philadelphia voters weigh in on legalization.

“This gives us the ability to give some perspective on what the citizens and the City of Philadelphia feel about this issue, before the governor and our members of the General Assembly take action,” Green said in a Facebook live video.