Medellín Steps Into Its Role as a Latin American Cultural Force 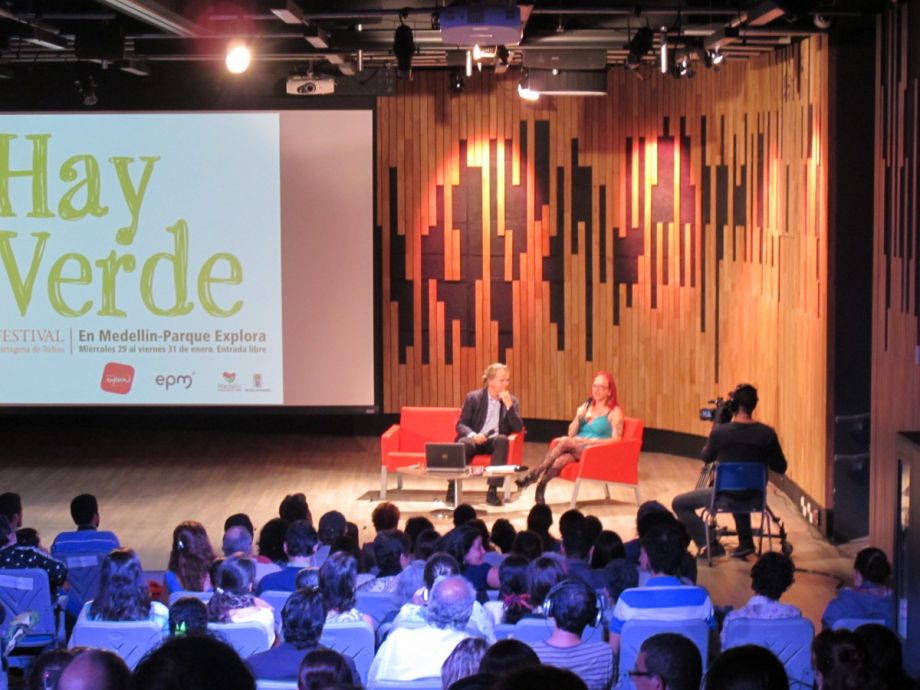 Events like Hay Verde would not have been possible in this city not so long ago. Photo credit: Charles Parkinson

The queue had started two hours before the event, both the main auditorium and a spillover were full and at the end of the show the stage was awash with desperate fans clambering for an autograph. But this wasn’t a pop concert or a movie star appearance, it was a talk given by celebrated anthropologist Wade Davis as part of Hay Verde Medellín, a literary and cultural event unthinkable in this city just a few years ago.

Known as “Hay Verde” (Green Hay) for its focus on the environment and sustainability, this year’s festival, held during the last week of January, welcomed speakers such as journalist and writer David Rieff, naturalist Mark Cocker and horticulturalist Tom Harte Dyke, with Davis the star of the final day.

The festival, which originated in the United Kingdom in 1988, has been held in Cartagena for the past eight years, with its arrival last year making Medellín the fifteenth global manifestation of the event, and adding to a growing tide of cultural events and notable personalities to arrive in the city. In the past eighteen months, both Madonna and Beyoncé have performed at Medellín’s Atanasio Giradot Stadium, while the 2013 edition of Colombiamoda – now Latin America’s second-largest fashion week after Sao Paulo’s – welcomed world-famous designer Haider Ackerman. The Hay Festival’s return represents just one element of an eclectic array of cultural attractions that have propelled Medellín into the international press.

For Andres Ruiz Acosta, head of the academic and cultural program at festival venue Parque Explorer, the event contributes significantly to the city’s changing reputation.

“A festival like Hay has provided the opportunity for another type of event that offers us the chance to make sure this city continues to change, continues to improve, continues to progress and allows us to become more cultured,” he said.

So popular were the festival’s presentations, panel discussions and chat-show-style exchanges between guests and hosts that a second auditorium was opened to stream the conferences live and cater to the 1,000 to 1,500 visitors present for each one. With hundreds of online viewers also tuning in, Ruiz said the three-day event had been a major success.

For some of the guests, too, the opportunity to be a part of the changing narrative about Medellín was gratifying.

“I love it. For me, coming to Colombia is like coming home,” Wade Davis told Next City of his chance to contribute to the city’s new image shortly after stepping from the stage, where he had closed his talk by railing against the drugs-and-crime lens through which both Medellín and Colombia are commonly viewed.

For Brigitte LG Baptiste, director of the Alexander von Humboldt Biological Resources Research Institute in Bogota, who hosted Davis’ conference, the global scope of Davis’ message was deeply relevant to the experiences of the people of Medellín.

“Today Wade used a general, global speech, covering the world wars, drug policy, everything. But all that he covered also exists locally and has been lived through here in Medellín and in the region,” said Baptiste. “That connection is fundamental; it tells us we are not unique or alone.”

For the people in attendance, the event was also a momentous step forward for Medellín.

“To see someone who loves our country and transmits that energy to us, to make us believe in our resources and the potential of this country is very refreshing,” said Juan Jaramillo Mejia, a Medellín native who has lived much of his life outside the city. “Having the festival here, something that comes from England and brings all of these perspectives and ideas, is in every way enriching.”

“I am thankful that such speakers come, who have studied so much and provide such an example by bringing what they have learned to us and, with that, may inspire visitors to come here, not just to party, but for the other things we have,” said Sarai Mokdad, a resident of Medellín. “This event contributes to us having a better image.”

For Canadian David Campbell, who has lived in Medellín for seven years and runs the bar Tinto Tintero – well known in the city for staging free cultural lectures – the presence and popularity of speakers such as Wade Davis only emphasizes to the world a thirst for culture in Medellín that he has long noted.

“I still have friends back home who can’t get their heads around the idea there isn’t crime and people being kidnapped on every corner of the city,” he says. “It is good that through events like these people outside will begin to understand the culture which exists in this city. It’s something I have seen through the amazing response to the events I put on. I’m glad people from outside might finally start seeing that side to the city, too.”