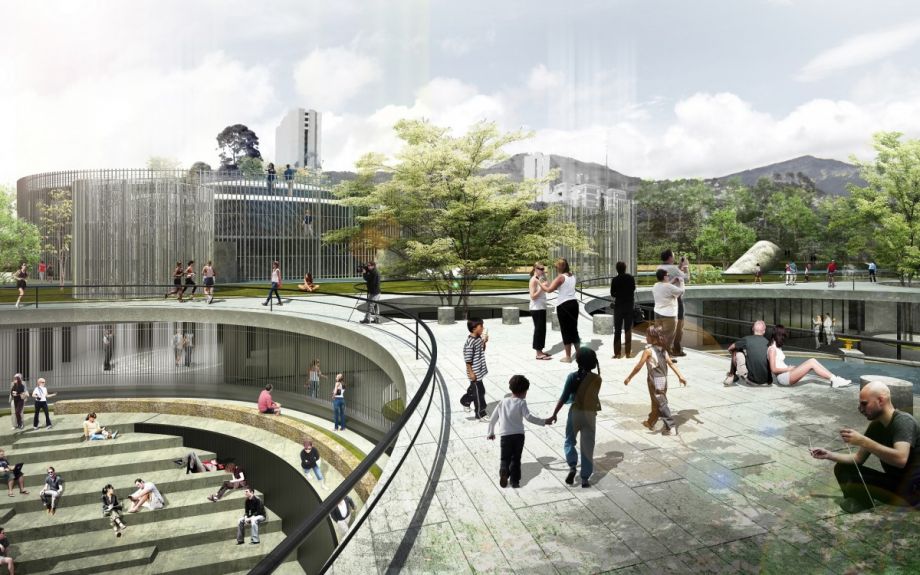 “The most innovative city in the world.” “A city for life.”

This is how promotional materials refer to Medellín — a place that once had the highest homicide rate in the world. Look past the Colombian city’s sloganeering, though, and there are concrete accomplishments. The country’s only urban rail system, the centerpiece of a large multimodal transportation network. A riverfront that’s slowly opening up. A former jail turned into a university in one of the city’s poorest neighborhoods. Hundreds of new public spaces, from parklets to giant downtown plazas. Last year, when the city hosted the 7th World Urban Forum, it was constantly held up by architects, policymakers and urban planners as a model of sustainable development and social equity. (In 1991, there were 381 murders per 100,000 people. Twenty-two years later, that number had dropped to about 50 homicides per 100,000 people.)

According to Jorge Perez, the city’s planning commissioner, the ideology underlying all this work is simple: “Our city built up a kind of social pact about our future. Creating a city for life means creating public spaces, creating a city that is inclusive and brings opportunities for all.”

Along with current Medellín Mayor Anibal Gaviria, Perez was the featured speaker at an event sponsored by the American Institute of Architects and Consortium on Sustainable Urbanization this week. A constant theme was that inequity was as great a threat to city well-being as violence.

From left to right, Jorge Perez and Mayor Anibal Gaviria, of Medellín, and Urs Gauchat (Photo by Jordan Fraade)

“They took a finite amount of money and made improvements for the maximum number of people,” Urs Gauchat, CSU’s director and the event’s moderator, said of why the city’s urbanism should be deemed a success. “The shift was from building buildings to providing access.”

Gaviria (who used a translator) showed off some of Medellín’s newest public works. The city, which is located in a valley 5,000 feet above sea level, has been especially innovative in the area of transportation. The mountainsides surrounding the city have become home to shantytowns, haphazardly planned and largely cut off from the resources in the urban core. To alleviate this problem, Medellín is currently putting the finishing touches on the Tranvía de Ayacucho, the first tram in Latin America to use pneumatic wheels. That service will connect the Metro, which runs through the city’s downtown areas, to the shantytowns east of the city, and is scheduled to open in September.

The Mayor also referenced Metrocable, the city’s famous mountainside gondolas. He noted that while Medellín was not the first city to build a cable-propelled transit system, it was the first to make gondolas part of a citywide, multimodal transit network. The purpose of doing this, he said, was to bring institutional support and economic development to the most neglected corners of the city. “With pride we can now say that cities that have had cable systems for 60, 70, 80 years, like Rio de Janeiro … today have urban cable systems modeled after Medellín,” he said.

Gaviria highlighted what Medellín calls UVAs — Unidades de Vida Articulada, or Articulated Life Units. The city’s website describes UVAs as, essentially, neighborhood-level urban interventions to open up new public space, encourage citizens to interact with each other, and provide a forum for sports, culture, and recreation. The UVAs around the city take different physical forms, but Gaviria was clearly proudest of the repurposed water tanks that have been turned into public spaces.

Perez described the city’s attitude regarding the water tanks as “Destruir la cerca para estar mas cerca” — a Spanish play on words meaning, “Destroy the fence to bring people closer.” For decades, he and Gaviria said, the water tanks dotted the city but were closed off to the general population. Slums and favelas grew around them. The decision to open them up and turn them into public spaces has been resoundingly popular with the public — and architecture critics. UVA Orfelinato, one of 20 water tanks around the city that has been turned into a park, won this year’s Holcim Foundation Gold Award for sustainable construction.

Going forward, Perez and Gaviria said two things are crucial if other cities want to replicate Medellín’s success. The first, as corny as it sounds, is optimism.

“Medellín was 20 years ago in the darkest night, and now we have light,” Gaviria said. “You don’t need a lot of money … . You need creativity and you need emotional capacity, you need will, and of course, you need courage. And a lot of love, love for our people.”

The other key element is continuity of purpose.

“In the last 12 years we’ve had three mayors,” Gaviria said. “Transformation of society is possible only if you have several good governments, successively synchronizing.”

In other words, mayors must be willing to work on projects that they may not get all the credit for — and have a vision that goes beyond winning the next election.