Medellín Opens Its Changing Streets to the World Urban Forum 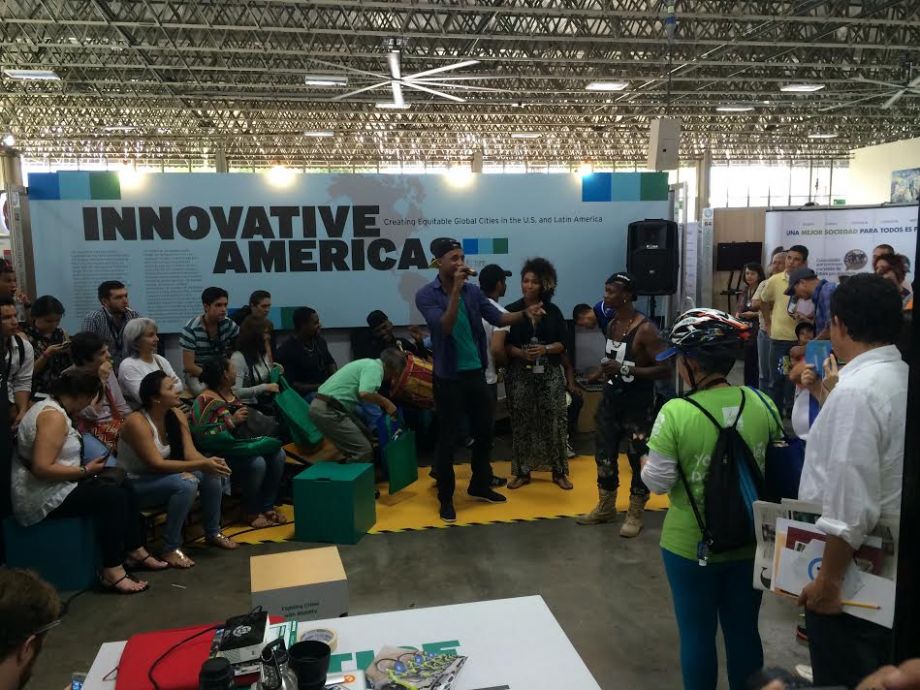 From volunteers in matching red polos crowding the airport to banners hanging from seemingly every streetlight, it’s clear that Medellín has rolled out the red carpet for the 2014 World Urban Forum (WUF). Massive gatherings like WUF can easily dominate the local news in this Colombian city of a little more than 2 million, especially given its reputation for urban innovation. But with a global audience descending on the City of Eternal Spring, there was also some last-minute housekeeping to be done.

Our colleagues at the Penn Institute for Urban Research arrived early and saw crews of maintenance workers raking parks in El Poblado, stacking trash bags that were whisked away by the time forum-goers began streaming into the neighborhood. I wonder if less tourist-friendly areas got the same treatment.

On a more dubious note, my taxi driver from the airport told me that the city had rounded up the downtown homeless population — a growing problem in Medellín, he said, where crack and heroin are far cheaper than in the U.S. — and is supposedly lodging and feeding them, one would hope, somewhere outside the city. But he doesn’t believe there’s a long-term treatment plan, just a makeshift solution to hide any of the city’s warts for the duration of WUF.

Curious, I sauntered over to the Municipality of Medellín booth to get its side of the story. The display is mostly a walk-in tourism brochure for the city, and a press person staffing the booth said he was unaware of such a temporary eviction plan, asserting that he has seen homeless recently in the vicinity of Plaza Mayor. He did mention a municipal facility, the Centro Día, offering public health treatment to drug addicts living on the street. The first hit of my Google search on the topic was of an explosion last month that killed four homeless people sleeping in the Centro Día.

I also asked my driver, a lifelong Medellín resident, about the city’s biggest remaining problems in the wake of its world-renowned transformation. He cited the nexus of drugs, gangs and violence — the same bugaboo that made the city the most violent in the world in the early 1990s — as an enduring thorn in the rosebush for a place that would rather be known for its annual flower fair.

To that extent, security has been tight on the streets, with police and military a constant presence. Even inside WUF, heavily armed guards patrol the grounds. But that hasn’t stopped — in fact, in security-conscious Medellín, it has probably helped — the huge crowd of curious locals making a beeline for the Plaza Mayor Convention Center on Saturday, the first day WUF opened to the public.

For a city that accomplished a major transformation through architecture and urban design, the airy, light-filled convention center is actually a rather attractive place to camp out for the week, as is the fully modular and recyclable Innovative Americas booth, where Next City has set up shop. A performance by Membele y Son, a local group that plays Afro-Colombian music, provided a much-needed dose of local culture. (Too bad some cranky French in the room below complained about the noise.) Meanwhile, the salsa flash mobs that erupted in a few places on Monday carried on without disruption.

For those of us navigating Medellín for the first time, Metro has been generously doling out free passes for the week, which are good on the subways, bus rapid transit and, of course, the MetroCable aerial gondola. When I provided the address of my Airbnb pad to find out if I live near a subway or BRT station, however, three booth staffers pored over a map for 10 minutes before coming up empty: They couldn’t find Carrera 85C in the confusingly numbered street layout. While plenty of colorful buses make their way through my neighborhood, a whole fleet of public transportation options exists outside the purview of the official city transit authority.

Although much of Medellín’s progressive urbanism is laudable, it seems that cars still rule the streets in the capital of Antioquia. Most distressingly, pedestrians are a decidedly unprotected species — cross at your own risk, I was warned. That proved good advice in the giant roundabout outside the convention center as I sought (in vain) to find a bus stop for my ride home.

I tip my sombrero vueltiao to Margarita Maria Perez, a 56-year-old business administrator and dedicated cycling activist. She made the 40-kilometer trip — and a hilly one at that — to find allies at WUF for her pet cause: Bike infrastructure in the suburb of Envigado, which much to her dismay is currently hosting an auto show. Her group, Ciclo-rutas Envigado, is active on Facebook and Twitter in its quest for something more than recreational paths. I’ve seen some grade-separated bike lanes myself and have heard about a local bike share program, so hopefully I’ll also get to explore Medellín on two wheels.