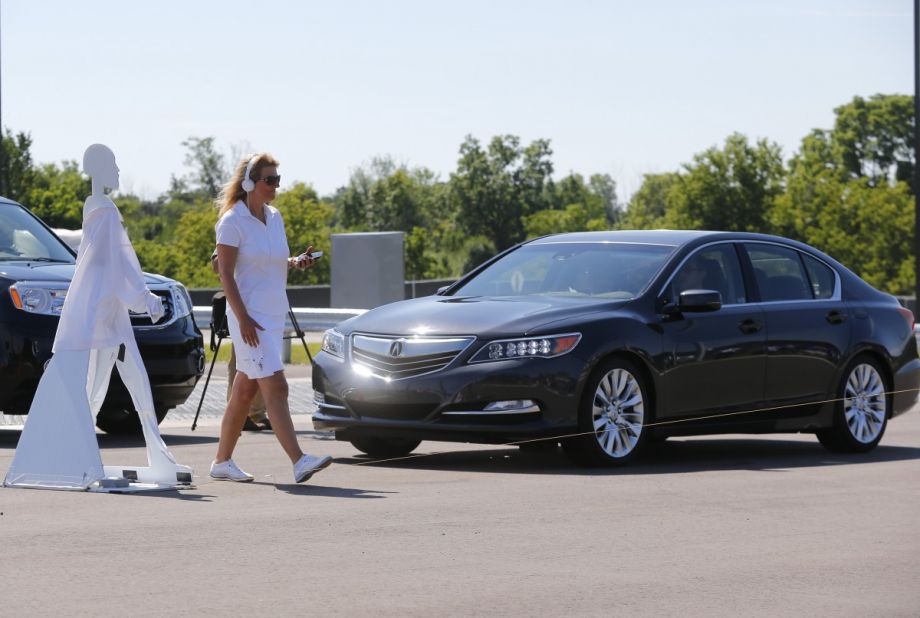 A pedestrian crosses in front of a vehicle as part of a demonstration at MCity, the University of Michigan’s stage-set village for driverless cars, which launched in July. (AP Photo/Paul Sancya)

The fun thing about driverless cars is the cars, of course: how they recognize and stop for pedestrians, sense and flow with nearby traffic, and process road repair updates quickly enough not to be launched off the nearest half-built on-ramp.

But in the industry’s optimistic vision of the near future, in which millions of autonomous vehicles hit the road before 2020, the cars are only the surface of the wave. The self-driving fleet will require back-end innovation in telecommunications, computing and roadway infrastructure too.

At MCity, the University of Michigan’s stage-set village for driverless cars, which launched last month, it’s not just the automakers that are experimenting. “Sure, we have the autos, but also insurance, telecom, big data, et cetera,” says Peter Sweatman, the head of the University’s Mobility Transformation Center. “They don’t generally get in the same room with each other. This is highly unusual.”

With most of its funding from corporations and the Michigan Department of Transportation, MCity is the most visible element of the Mobility Transformation Center (MTC), a $100 million university initiative. It’s also a unique fusion of corporate and academic priorities: The goal, Sweatman says, is developing real-world public-private partnerships (PPPs). Corporations conduct their own research at MCity, and vote on which faculty research proposals should be adopted. By 2021, MTC hopes to have thousands of connected, autonomous vehicles on the roads of Southeast Michigan, a statement of the state’s desire to broadcast its role in the future of automotive science.

Alongside the usual suspects — Ford, General Motors, Honda, Nissan, Toyota — the main sponsor group includes companies like Verizon and Robert Bosch, which specializes in tools and auto parts. The implication is that the driverless revolution, like the spread of the automobile before it, will ripple far beyond the carmakers, with effects on the legal system, finance, social relations and architecture.

Hence the presence of Xerox, a company better known for office supplies than automotive engineering, which is making a transition into transportation science. “We’ve taken a lot of the Xerox capability with respect to imaging and transitioned that to the transportation sphere,” says Joe Averkamp, a senior director at Xerox. For example, the company now sells a license plate reader, and has developed a camera that uses a low-wave, red flash to determine vehicle occupancy. (Standard photography is more vulnerable to tinting effects, Averkamp explains.)

“There are roads where they have 30 percent HOV declaration, and analysts I’m talking to are skeptical,” Averkamp says. Without reliable data on vehicle occupancy, DOTs can’t effectively adjust tolls on highways and bridges or in a center city congestion pricing scenario. In a case study conducted for Caltrans on Interstate 5, the company’s analysis was more than 95 percent accurate — compared to just 35 percent for roadside observers.

It’s a system that could work in concert with Dedicated Short Range Communications (DSRC), another piece of technology that Xerox will be experimenting with at MCity. With a special spectrum band dedicated by the Federal Communications Commission in 2003, DSRC is the method by which the U.S. Department of Transportation is trying to develop universal roadway communications. U.S. DOT is considering requiring DSRC capability in all cars, which could automatically exchange safety-related messages with each other and with highway infrastructure.

At MCity, which the company considers a venue for showcasing and testing, Xerox was using its vehicle-occupancy cameras to count travelers, and then broadcast HOV status on roadside signs. With DSRC, that information could be sent directly to your dashboard. So could the price of a toll, assigned to you via a license plate reader, as you passed through an overhead toll plaza at 60 miles per hour. (Five years ago, Xerox bought ACS, the country’s leading back-office tolling company.)

That communication science is central to MTC’s vision of the automotive future; the center always refers to a world where vehicles are not just without drivers but “autonomous and connected.” It’s not just a question of one driverless car equipped with sensors detecting accidents and potholes, but of a cloud of invisible information, vibrating across the airwaves, carrying the speed and location data of every nearby vehicle.

“We’ve basically had the same mobility system for a century,” Sweatman said. “Independent vehicles piloted around by human beings without much reference to each other.” It’s an era, Sweatman believes, that is now coming to a close.