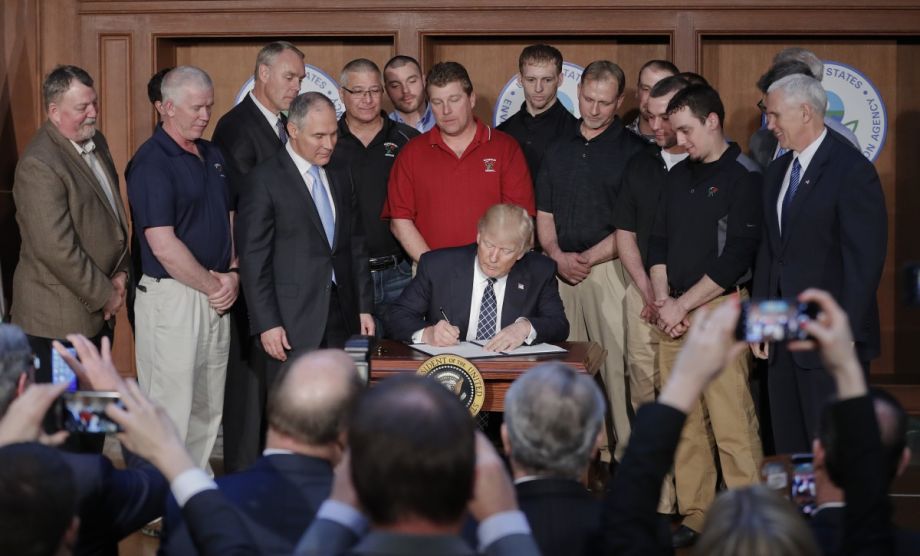 After President Donald Trump signed an executive order Tuesday intended to undo much of President Barack Obama-era environmental regulations, U.S. mayors are once again voicing their opinions with hashtags and an open letter urging Trump to reconsider.

More than 30 mayors have signed a letter to Trump that stresses the importance of U.S. climate policies such as the Clean Power Plan and vehicle fuel efficiency standards, and urges him to reconsider his proposed budget cuts to the EPA and critical federal programs like Energy Star.

The letter comes only four months after 37 mayors from cities in both blue and red states across the U.S. signed another open letter asking then President-elect Trump to embrace the Paris climate agreement and support local climate change mitigation initiatives. Tuesday’s letter likewise stresses cities’ commitment to “taking every action possible” to achieve the Paris climate agreement goals and to engaging states and the private sector to join them in their efforts. The letter also highlights the role climate action can play in local economies and job creation — including through electric vehicles and solar power — and urges Trump to change course and join them in their efforts. From the letter:

As mayors, we work with our constituents face-to-face, every day, and they demand that we act on climate to improve quality of life and create economic growth. As public servants and stewards of public funds and infrastructure, we also cannot ignore the costs of inaction. That is why we are also standing up for our constituents and all Americans harmed by climate change, including those most vulnerable among us: coastal residents confronting erosion and sea level rise; young and old alike suffering from worsening air pollution and at risk during heatwaves; mountain residents engulfed by wildfires; farmers struggling at harvest time due to drought; and communities across our nation challenged by extreme weather.

Many mayors also spoke out against Trump’s executive order on the platform where he spends a lot of time: Twitter.

Proud to be 1 or 35 #ClimateMayors objecting to @POTUS climate policies and committed to meeting #ParisAgreement. https://t.co/4h0WclgTg4

Austin thrives because of our environment. That’s why we protect it. #climatemayors pic.twitter.com/b2pLtJlbLr

If the past is any indication, it’s unlikely Trump will heed the mayors’ concerns. Despite that, however, the officials expressed a commitment to leading efforts to combat climate change — with or without help from the White House.