Mayor of Convention City – Next City 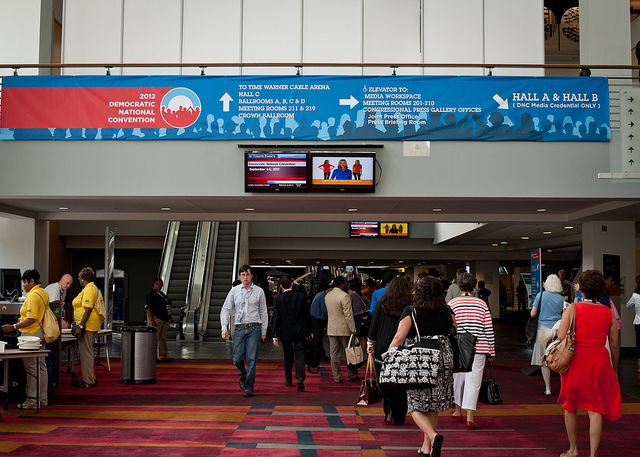 Mayors are playing a big role at the DNC. Credit: Barack Obama on Flickr

San Antonio Mayor Julián Castro is a telegenic guy with a great personal narrative and a smart charisma. He is also a forward-thinking big city mayor who, in the tradition of other such leaders, recently penned a long-term plan for sustainability and growth, SA2020.

The blueprint charts a plan of growth that aims to attract new residents and businesses to the Texas city’s downtown, improving mass transit, health, education and public safety, the San Antonio Express-News reported in August.

“All of these projects are the building blocks of a successful downtown in the years to come,” Castro recently told a Texas Pubic Radio reporter. “The residential, the retail, the mixed-use, the public investment projects like the performing arts center, the river and the Hemisfair.”

As Forefront writer Ben Adler explained last week in his piece “Mitt’s Metropolis,” that vision for a vibrant, job-generating urban center depends on federal agencies and policies threatened by Republican Presidential candidate Mitt Romney, who has promised to cut back investment on everything from food stamps and public housing to green jobs and transit. The consequence of which could be “grave” for cities, Adler wrote.

Unfortunately for President Obama, none of that got mentioned in Castro’s keynote address on the opening night of the Democratic National Convention two days ago. Instead of the specifics of Castro’s vision for the future, we got an inspiring yet formulaic story of his immigrant family’s ascent into middle America; a moving but coded story of traditional family values and a bootstrapping work ethic that, without the civil rights spin and female leads, could have come straight out of an America Comeback Team children’s book.

From a transcript of Castro’s speech, provided by the Democratic party:

My grandmother never owned a house. She cleaned other people’s houses so she could afford to rent her own. But she saw her daughter become the first in her family to graduate from college. And my mother fought hard for civil rights so that instead of a mop, I could hold this microphone.

Castro is not alone in his turn to personal narrative. On the third day of the DNC, it’s exceedingly clear that both parties have decided that plying swing voters mostly means telling stories. Whether of Castro and his family’s hard-won climb up the American ladder or Republican Vice-Presidential candidate Paul Ryan and his grandmother, both parties are offering up such sentimentalized getting-to-know-you tropes.

Obama’s weakness is with white voters who don’t identify with the president or see the value in his public investments. (In three national polls conducted since April, Obama held 6 percent fewer white voters than he had in 2008, bringing his support level to 34 percent of white voters without a college degree, compared to 40 percent four years ago, according to The New Republic.

The president’s approach thus far has been to forget about this once-omnipresent block, and instead focus on getting his base of minority and/or women out to the polls. The stories help there. But judging from former president Bill Clinton’s speech, there may be power in actual substance — especially where Obama’s missing block comes into play. Clinton talked about specific policies. He mentioned words that sometimes feel verboten, like poverty and equality, and emphasized pragmatism and practice over ideology.

From a transcript of Clinton’s speech, again provided by the Democratic party:

Through my foundation, in America and around the world, I work with Democrats, Republicans and Independents who are focused on solving problems and seizing opportunities, not fighting each other. When times are tough, constant conflict may be good politics but in the real world, cooperation works better. After all, nobody’s right all the time, and a broken clock is right twice a day. All of us are destined to live our lives between those two extremes. Unfortunately, the faction that now dominates the Republican Party doesn’t see it that way. They think government is the enemy, and compromise is weakness.

I believe in the power of personal narrative. Obama does too. And for good reason; his is an amazing one. But to sway voters on the fence who don’t share his background or necessarily his values, Obama and his advocates may have to turn on the substance and roll back the charm.

This is something mayors such as Chicago’s Rahm Emanuel, who spoke Wednesday, and Philadelphia’s Michael Nutter, scheduled to speak just before Obama on Thursday, are uniquely positioned to do. Sitting in city hall, mayors must work across party and sector lines, collaborating with people of all political stripes as well as the businesses and land owners that cities need to fund critical infrastructure projects. Mayors are on the front line of the battle over shared public investment that the country is fighting this election season.

As former New York Mayor Fiorello LaGuardia famously said; “there is no Democratic or Republican way of cleaning the streets.” It’s that sort of pragmatism that is needed in Washington. Maybe it’s the country’s mayors who need to make the case.