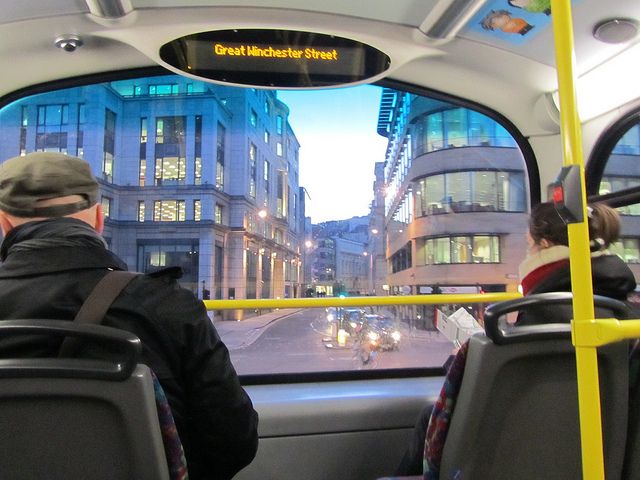 Margaret Thatcher, the prime minister of the United Kingdom from 1979-1990, died on Monday following a stroke, The Guardian reports.

Nicknamed the “Iron Lady,” Thatcher was known as an opinionated leader who both rallied and alienated British citizens with her outspoken conservatism. One of her most oft-quoted quips concerns public transportation — and it’s none too kind.

It may also be untrue.

“A man who, beyond the age of 26, finds himself on a bus can count himself as a failure,” Thatcher once said, according to legend if not any verifiable sources.

However, many in the British media have disputed the veracity of the quote, noting that the age of this bus-riding failure of a man often changes (sometimes he’s 29 or 30) and citing primary sources that credit the words instead to a prominent duchess and socialite.

So what is Margaret Thatcher’s true public transit legacy? Well, it may have less to do with a sound bite worthy of Oscar Wilde than a typical conservative penchant for privatization and deregulation.

Along with many other public services, transit in Britain took a gradual but stark turn toward privatization during the 1980s. The most radical shift under the Thatcher government changed the way buses operate in the U.K.

This 2004 lecture by the University of Oxford’s John Preston gives a pretty good timeline of what happened to British buses during this period. In the first year after Thatcher took office, the Transport Act 1980 — passed by Parliament but introduced by the prime minister — deregulated intercity coach services throughout the country.

In 1984, another act of Parliament took control of public transportation in Greater London away from the local government, giving it instead to a statutory corporation called London Regional Transport. Only in 2000 did a local government agency, Transport for London, again take over the capital city’s public transit system.

The most significant change came with the Transport Act 1985. Applying to everywhere in the U.K. except London and Northern Ireland, the law required local authorities to transfer control of their bus systems to separate companies. A private bus company can pretty much operate however it likes, so long as it gives advance notice about a new service, ending a service or a timetable change (fares aren’t regulated). If an area winds up without adequate bus service, local authorities can design a service and then pay a private actor to operate the system. Some private bus services depend on subsidies, but not all.

While proponents of bus deregulation argue that it makes for a more cost-effective public transportation system, critics have countered that it discourages bus use. As Preston finds, in the 20 years from the time British buses started being deregulated, ridership in the U.K. outside London decreased by 37 percent. Meanwhile, passenger trips within London, which maintained a partly regulated system, increased by about one-third.

Another concern about bus deregulation comes from the fear of “bus wars,” or fierce competition between bus companies that can lead to unsafe driving, public safety issues and traffic problems.

A decade after Thatcher left office, another Transport Act (2000) allowed for some reregulation of British bus services. Now, municipalities can establish “Quality Partnerships” with private bus operators, by which the private operator promises to improve services while the local government pays for infrastructure like bus lanes and shelters. Most of the power in this public-private partnership remains tilted to the private side, as it’s still the companies that get to set fares and schedules.

Thatcher’s attitude toward public transportation wasn’t as hostile as legend might have it. Given that the late prime minister likely didn’t ride too many buses in her day, the dynamic was more of a live-and-let live sort of thing — a hands-off approach that largely endures to this day.