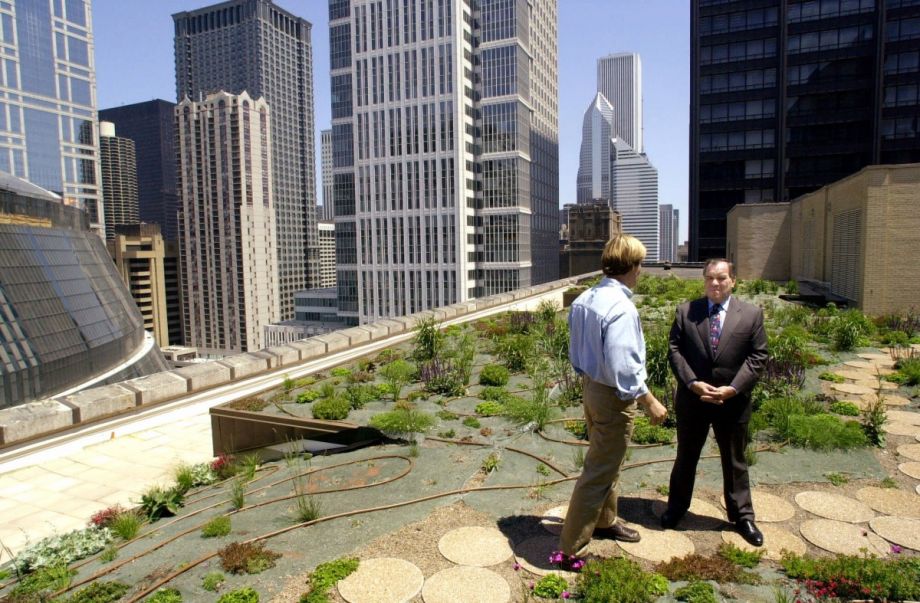 Former Chicago Mayor Daley on the roof of City Hall, which got a new green roof in 2001 (AP Photo/Stephen J. Carrera)

Plan it — and there will be consequences. Encourage a community to conserve water? Sewer pipes can back up and corrode because of the reduced flow. Build a new light-rail station to expand transit access? Gentrification can follow, along with displacement.

While approaches such as making community engagement more inclusive and improving policies are well-established factors in avoiding negative outcomes, Simi Hoque wants to give planners another tool — one that could help predict outcomes by anticipating how changes in one urban system would affect the others.

“If such a tool existed then policymakers and program officers at the city level or municipal level would be able to evaluate or develop programs that actually met their targets,” says Hoque, who’s an assistant professor in the building and construction technology program at the University of Massachusetts Amherst. “They would be able to say, quantitatively, ‘we’re going to do this, we’re going to spend this much money, and it’s going to give us this much return.’”

Hoque, with the help of graduate students Nariman Mostafavi and Soroush Farzinmoghdam, is creating a technology she calls the Integrated Urban Metabolism Analytical Tool, or IUMAT. Last month she was granted a five-year, $508,714 National Science Foundation CAREER award to continue its development.

Hoque says the tool could be a boon to cities that are developing sustainability plans, which often lay out different strategies for stormwater, land use and other components, without taking into account how the systems interact — because for the most part, their relationships are unknown.

She cites as an example Chicago’s plan to put green roofs on all public buildings, which the city hopes will not only help with stormwater retention but also may reduce energy consumption. “But we don’t know,” says Hoque. “We don’t know at that scale whether that is actually going to have an impact, and whether that billion dollars could be better spent on other things.”

IUMAT would try to answer these questions by creating mathematical relationships between different sub-sectors of urban planning. Data sets from many different urban systems — like water use, energy consumption and transportation planning — would be overlaid to see if patterns emerge.

Within the urban environment, “those are two related things, but how do you relate them?” asks Hoque. “What we’re hoping is that we create links between tools that have always been used,” not to reinvent each individual system. So transportation planners will continue to measure in cars, and architects in buildings, but IUMAT will find the common denominator that allows their data to communicate.

For that reason, gathering quality information is one of the biggest challenges. “The data that we’re going to get will be full of holes and uncertainties and just wrong,” says Hoque.

Thankfully, she notes, “many cities are beginning to collect data in a much more systematic way and concerted way, just because it’s increasingly clear that we have no idea what’s actually really happening in cities.”

Hoque and her team have been working on IUMAT for the past two years, and she anticipates a prototype will be ready within five, the timeline given for the NSF award. IUMAT will be tested in and around western Massachusetts, where Hoque is based, and in cities connected with the University of Maryland, with which she has a close relationship.

She also sees IUMAT as a teaching tool. Her UMass Amherst colleague Ben Weil is utilizing the nascent tool to teach a course about the urban environment from a systems perspective.

Hoque also lends her expertise to a project that invites high-school girls to learn about STEM fields through workshops and outings with professors and graduate students. She runs workshops in which she and the girls create maps of Holyoke, paying special attention to the relationships.

“They may not have ever thought of their city in this particular way, that there are systems,” says Hoque. The workshop doesn’t use the tool, “but it uses concepts behind the tool to introduce this idea of sustainable urbanism to the girls.”

With the complexity of the proposed tool, and its uses and teaching opportunities near endless, Hoque says, “It’s called a CAREER award, I think, for a reason. It is a project that I hope will keep me engaged and motivated and interested for a long time.”

How long might it take to finish? “I think it will take the rest of my life.”