Maryland Battles between Heavy and Light Rail – Next City 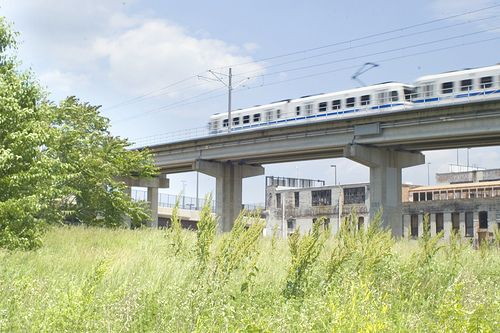 In cities across America, light rail has become the symbol of success in transit development. Hoping to demonstrate their interest in public transportation and following the example of Portland, cities like Denver or Dallas are building nothing else.

But it hasn’t always been that way.

Until the 1980s, heavy rail — more like the New York Subway — was the choice of both the federal government and most municipalities. That’s why in the sixties and seventies, Congress committed to spending billions of dollars on new subway systems in Atlanta, Baltimore, Miami, San Francisco, and Washington. But those projects were wildly expensive and less performing than originally expected. With the exception of a single line added in Los Angeles during the 1990s, there has been nothing built since, because heavy rail, with its separated guideways and frequently underground or elevated stations, is simply much more expensive than light rail.

For the citizens of cities like Baltimore, which has dabbled in both varieties of rail over the years, there are palpable differences in service quality between its heavy rail Metro and its light rail lines. The first travels much more quickly and does so entirely in its own right-of-way, ensuring no collisions with automobiles; even better, its stations are fully featured and located directly beneath the downtown business district. The latter, on the other hand, provides slower commuting times because its in-the-road corridor is prone to delays and its stations are out of the way.

It is in that context that the Maryland Senate’s Budget and Taxation Committee last month asked the state’s MTA transit agency to reconsider its current plans to use light rail on two proposed transit corridors: one, the Red Line through central city Baltimore, and another, the Purple Line proposed to run a circumferential route around Washington, D.C. The Committee’s members suggested that the MTA at least evaluate using heavy rail for each of those routes.

Both projects have been under study for years, and only in 2009 did the state finally commit to funding their construction, albeit with an expectation of aid from Congress. Though a review of the projects would cost plenty of time and money — on top of the more than $40 million already spent on planning each — the MTA can now take advantage of less cost-focused new federal rules to promote a more expensive option than would have been possible just a few months ago.

Nate Payer, Vice President of the Baltimore Transit Riders Action Council (TRAC), told me that “we need to study all reasonable alternatives.” To him, a heavy rail alternative “meets the purpose and need, it makes technical sense.” TRAC has pointed out over the years that short, phased extensions of the existing heavy rail subway in Baltimore could be cheaper and more effective than a new light rail line.

To Ben Ross, on the other hand, the Senate’s move is “purely and simply an effort at obstruction,” he wrote me in an email. Ross’ group, the Action Committee for Transit (ACT), has been a strong proponent of light rail for the Purple Line; they see efforts to put the project underground as simply a way to get rail out of the backyards of certain anti-transit activists.

More significantly, perhaps, new federal rules may not go far enough in actually providing new funds. Even with a larger contribution from Washington, a more expensive heavy rail project would weigh heavily on Maryland, not exactly acceptable for an already indebted state.

Heeding that call, the Maryland House rejected the effort to encourage the consideration of the heavy rail option, pushing Maryland back towards light rail.

And indeed, there is probably little hope this late in the game that Maryland will turn around and switch in heavy rail for corridors that are almost ready for construction as light rail.

But other cities that until recently might have assumed that light rail is the only way to go now have the opportunity to reconsider heavy rail for certain routes thanks to the now more lenient federal guidelines. Does this mean they should? Should state legislatures be getting involved in decisions about what kind of technology to use for new corridors?

There’s no universally applicable answer: There are clearly benefits to both light and heavy rail, and the fiscal environment must surely make a difference in deciding whether to invest in more expensive alternatives. Nonetheless, the debate in Maryland surely presages a growing interest by local organizations like TRAC or ACT to promote specific technology choices for new transit. The fight over the Purple and Red Lines may just be an opening act.