S.F.’s Dreams of a Car-Free Street May Finally Come True – Next City

S.F.’s Dreams of a Car-Free Street May Finally Come True 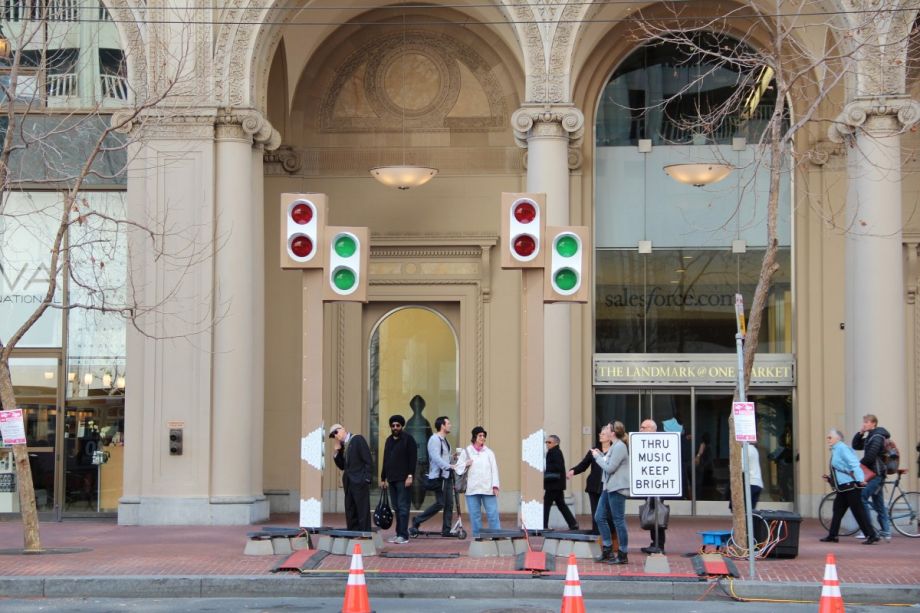 One installation displayed on a closed-down Market Street in 2015 (Credit: The San Francisco Planning Department)

San Francisco officials who skew car-free have been dreaming of transforming Market Street into a bike-and-public transit-only thoroughfare for years. Now, it looks like those dreams may be a step closer to coming true.

As part of a $604 million initiative, the city is planning to bring pedestrian, bike and public transportation improvements to 2.2 miles of city street between Octavia Boulevard and the Embarcadero, Hoodline reports. One part of the proposal — sure to be controversial — involves banning private vehicles, including ride-sharing vehicles, from certain parts of Market Street. Under the initiative, emergency vehicles, public transit, taxis and delivery trucks would still be allowed through, but all other vehicles would have to go around.

Private vehicles are already banned from turning onto Market Street between Third and Eight Streets. A 2016 study from transportation startup Zendrive found that restriction alone improved pedestrian safety by slowing down cars and reducing other risky driving behaviors.

The new plans reportedly emerged during a county transit authority meeting several weeks ago. The next step involves an environmental review, which could be completed as soon as next year. Supervisor Jane Kim expressed frustration about the project’s pace, pointing out that since “she came to office six years ago, project planning has been ‘ongoing,’” according to Hoodline.

And plans actually stretch much further back than Kim’s tenure. As Greg Lindsay wrote for Next City in 2015, “the dream of transforming Market Street into San Francisco’s living room is at least as old as its previous overhaul in the 1970s to accommodate the Bay Area Rapid Transit system running along much of its length.” In 2015, a three-day street festival tested out a number of projects vying to become permanent installations on the heavily trafficked throughway.

If plans do progress, the city could join Dublin, Paris (and maybe — eventually —Manhattan) in mustering the political will to actually ban private vehicles from parts of its downtown core. The city of Davis, California — home of the highest percentage of bike commuters in the U.S. and a major employment center, UC Davis, that is car-free — is an unlikely testament to its effectiveness.