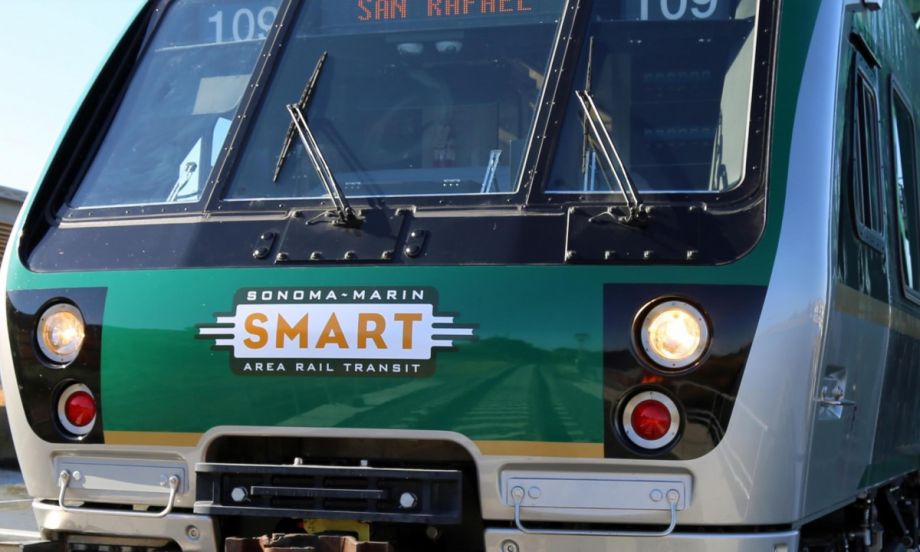 Well, part of it anyway.

A news report on SFGate.com notes that officials in Marin and Sonoma counties have been anticipating this day for two years as various issues delayed the actual start of service on the line, which operates on a 43-mile stretch of the Northwestern Pacific. The last hurdle the line cleared involved federal approval of the line’s positive train control system, a safety feature railroads across the U.S. must install to prevent train crashes.

SMART trains will stop at 10 stations between San Rafael and Santa Rosa, with 34 trains operating each day. New stations and extensions are already being planned as well, with Larkspur and Novato already under construction.

“This system will bring relief to commuters stuck on Highway 101 and provide a stress-free way to travel,” SMART Board Vice Chairwoman Kathrin Sears said in a statement.

Mississauga-Brampton Light Rail Moves One Step Closer to Construction
Metrolinx, the transportation planning agency for the Greater Toronto area, and Infrastructure Ontario (IO) have issued a formal request for proposals to design, build, operate and maintain the Hurontario LRT line in Brampton and Mississauga.

Progressive Railroading reports that the request is being sent to the three teams the agencies selected last June as candidates to build the line. Once the proposals have been submitted, Metrolinx and IO will evaluate them and select a contractor by mid-2018. Construction should begin that same year and take four years to complete.

The 12.4-mile line will have 22 stations, one of them underground, and connect with two GO Transit regional rail lines.

The Mississauga News reports that while the province of Ontario is footing the bill for the C$1.4 billion ($1.11 billion U.S.) line, Mississauga City Council is chipping in C$26 million ($20.71 million U.S.) on its own for station design enhancements at the stops in Mississauga.

Vermonters Get Physical Evidence of Plans for Commuter Rail
Many puzzle pieces remain to be put together before AllEarth Rail’s proposal to launch the first privately operated commuter rail line in the United States in several decades becomes reality. But at least the company will have the rolling stock to operate it once those pieces fall into place.

The 12 cars, built in the 1950s, had been refurbished in 1996 by Dallas Area Rapid Transit for service on the Trinity Railway Express commuter line. They last carried passengers in 2012.

The cars join two RDCs AllEarth had previously purchased. Two of them, however, are being sold to Portland’s TriMet, leaving AllEarth with a fleet of 12 total.

AllEarth Rail President Charlie Moore told VBM that he hoped to take the cars on a demonstration run for the public sometime this fall.

AllEarth’s cost estimate for launching a commuter rail line connecting Burlington with Montpelier and St. Albans is in line with figures the Vermont Agency of Transportation came up with earlier this year: $301 million to $363 million, including as much as $189 million for rolling stock. AllEarth purchased the 12 RDCs from DART for $4 million.

As far as actually launching the service, Moore said, “We’ve got a lot of homework to do yet,” but he expressed optimism for success down the road.

Should AllEarth succeed, the line would make Burlington the smallest city in the United States with regular commuter rail service to its city center, a distinction currently held by Wilmington, Delaware.