MAP: The Stresses of Water Scarcity – Next City

MAP: The Stresses of Water Scarcity 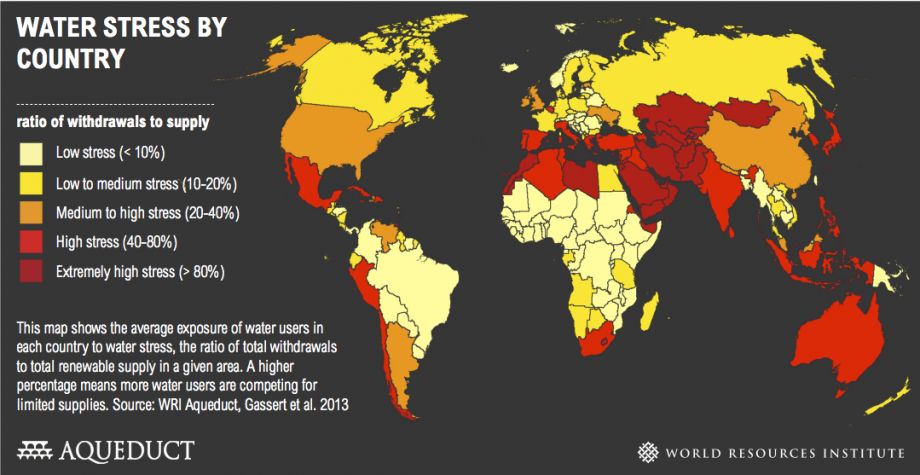 What energy was to the 20th century — a pricy commodity, prime geopolitical factor and public preoccupation — water may well become for the 21st. If you take a look at the interactive map of global water stress rankings recently put together by the World Resources Institute (WRI), you’ll see why.

Out of 181 nations included in the rankings, 37 face what WRI calls “extremely high” levels of water stress. Many more, together containing at least one-third of the world’s population, fall into the “high” or “medium to high” categories.

What does that mean, exactly? According to the data, the highest-stress nations — shown in red on the map — use more than 80 percent of their available water each year. “Such situations severely threaten national water security and economic growth — especially if a country does not have adequate water-management plans in place,” wrote WRI’s Paul Reig, Andrew Maddocks and Francis Gassert in a blog post announcing the findings.

The researchers looked at not only baseline water stress — that’s the ratio of annual water withdrawals to renewable supply — but also at the yearly and seasonal variation in water supply, the number of floods between 1985 and 2011, and the severity of drought between 1901 and 2008. The data came from WRI’s Aqueduct Water Risk Analysis.

Most of the nations among the 37 most-stressed are located on islands or in deserts, and so face significant geographical challenges. Many Caribbean countries and several on the Arabian Peninsula make the list, along with Iran, Morocco, Mongolia and Afghanistan.

But other countries, many with large populations, find themselves in trouble due to a combination of supply and demand issues. India, Mexico, South Africa, Chile and Australia are all ranked as “high stress.” The United States and China fall into the “medium to high stress” category at numbers 70 and 72, respectively. Both nations face “high” risk levels in their agricultural sectors.

As the WRI researchers point out, a nation facing severe natural constraints on its water supply can still find solutions. Singapore has no freshwater lakes or aquifers and received the highest ranking for water stress, yet it is a leader in water management because of its forward-thinking practices in rainwater collection, desalination, recycled water and conservation. It also has been shrewd in its negotiation of international agreements, importing 40 percent of its water supply from Malaysia.

Water strategies such as those developed in Singapore will likely become increasingly relevant for nations such as the United States. For a long time, the U.S. has played fast and loose with its water supply. In the new world of water, that will have to change.