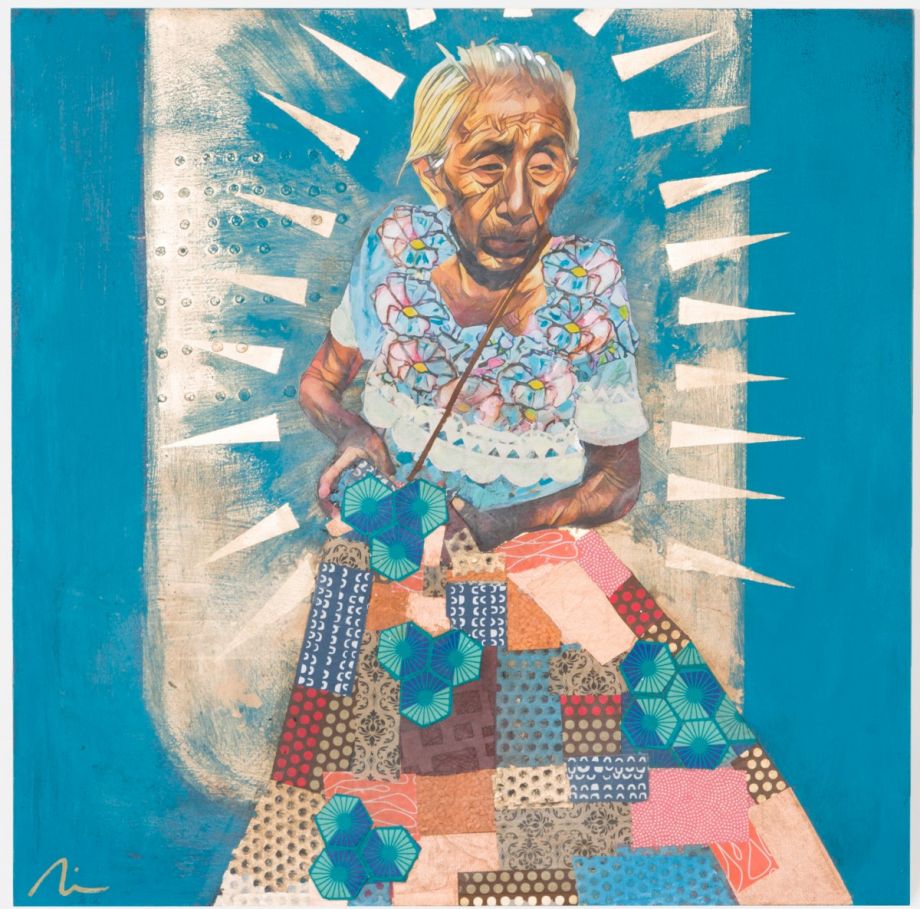 “Itzà,” by Nico Inzerella, on display as part of the yəhaw̓ exhibit at the newly refurbished ARTS at King Street Station. (Photo by Mel Carter)

But for those whose ancestors lived here long before the city sprouted, the red lettering on that third-floor window cuts to the bone of what that view represents: “Every Nation is a Massacre.”

The biting message is a rebuke to the 19th-century painterly vision of Manifest Destiny that shows cross-country train tracks plowing the way west for migrating settlers, at the expense of Native Americans. The window design is the handiwork of Demian DinéYazhi’ (Diné) and is one of 280 indigenous artworks on display at yəhaw̓, an exhibit that opened Saturday in the newly refurbished ARTS at King Street Station, a combination gallery and offices for the Seattle Office of Art and Culture. While art with a social message is nothing new, the publicly-owned venue represents a novel opportunity for local artists.

King Street Station — designed by the same architecture firm behind New York City’s Grand Central Station — has been owned by the City of Seattle since 2008, when it bought the 1906 red-brick Italianate structure with a Venetian-inspired campanile from Burlington Northern Santa Fe. For seven years, the third floor has sat empty while passengers stream through below at the busiest Amtrak station in the Pacific Northwest. In 2015, local curators secured permission to use the raw, attic-like room for a local art show; it ran parallel to the flashy Seattle Art Fair around the corner, which drew international galleries and deep-pocketed art collectors.

The revelation — that there was a publicly-owned, vacant space dripping with potential in a historic building in the heart of the city — set off a chain of events resulting in the Office of Arts and Culture’s move from the 17th floor of the city’s municipal tower into the station. The $5.6-million renovation has given the city agency, which distributes $4.4 million in grants annually, a more public presence in the community it serves.

“Previously we didn’t have anywhere for people to come to us where we could be centrally located and found,” says S Surface, the office’s program lead for the station project (and a 2016 Next City Vanguard). Or, as Director Randy Engstrom puts it, “We built a front door.”

“A Nation Is A Massacre,” by Demian DinéYazhi' (Diné) (Photo by Ottis Bolisay)

As a publicly owned arts space, the office endeavors to program ARTS differently from traditional museums or galleries. An advisory panel of local artists and community members will take the lead rather than handing the reins over to a single all-powerful curator or director. That approach resulted in a decision to dedicate the inaugural exhibit to the legacy of the Coast Salish people who were the original inhabitants of Puget Sound. And the exhibit would include every applicant eligible for that first show. According to the exhibition’s website, yəhaw̓ is a Lushootseed word that means “to proceed, to go forward, to do it” and comes from a Coast Salish origin story about the need for tribes with different languages to come together under a common cause to “lift the sky.”

“We wanted to reflect the reality of who was here — all the complex, nuanced stories of migration and intercultural exchange, and the long histories of trade between indigenous people,” says Tail, a second-generation urban indigenous person.

The resulting exhibit represents more than 100 tribes; 130 of the artists are female or female-identified. From mixed media sculpture to cutting-edge video art to paintings of graphic novel panels to photographic portraiture to in situ performance pieces to traditional handicraft, the exhibit covers the gamut of indigenous art practice today. Much of it has been incubated through partnerships with Puget Sound arts institutions that hosted residencies or donated studio space to allow the artists time and space to prepare works for the show. Between the art on the museum-quality movable walls and a zine that grew organically out of the exhibit’s development, all of the 200-plus artists who applied are featured.

“This concept touches on a vision for arts and culture in this city that resonates across lots of levels of power and lots of different communities,” says Engstrom.

The inclusive approach helped build trust for young and emerging artists, many of whom had never exhibited professionally before. Ashley Alvarez (Unangax / Unangan) has a bentwood hat, a tradition of her native Aleutian Islands, on display.

“I wouldn’t have felt comfortable in any other space,” she says.

The gallery will host yəhaw̓ through August 3. ARTS at King Street Station hopes to extend further that philosophy of inclusion beyond the typical art-consuming public that might come to view the exhibit. The space’s “living room” with tables, chairs, art books, free wi-fi and water fountains, is open to the public during business hours. ARTS is fully ADA accessible and has gender-neutral bathrooms, also open to the public in a neighborhood where such amenities can be in short supply, especially for the city’s unsheltered population.

The Office of Arts and Culture felt exceptionally removed when housed on the 17th floor of a government office building. And yet a challenge remains to invite the public into a somewhat secluded third floor. How will they keep the space dynamic and flexible, while still allowing staff to do their day jobs in the offices that share the space? The Office of Arts and Culture seems to relish this task as invigorating to their core mission of serving a diverse Seattle public.