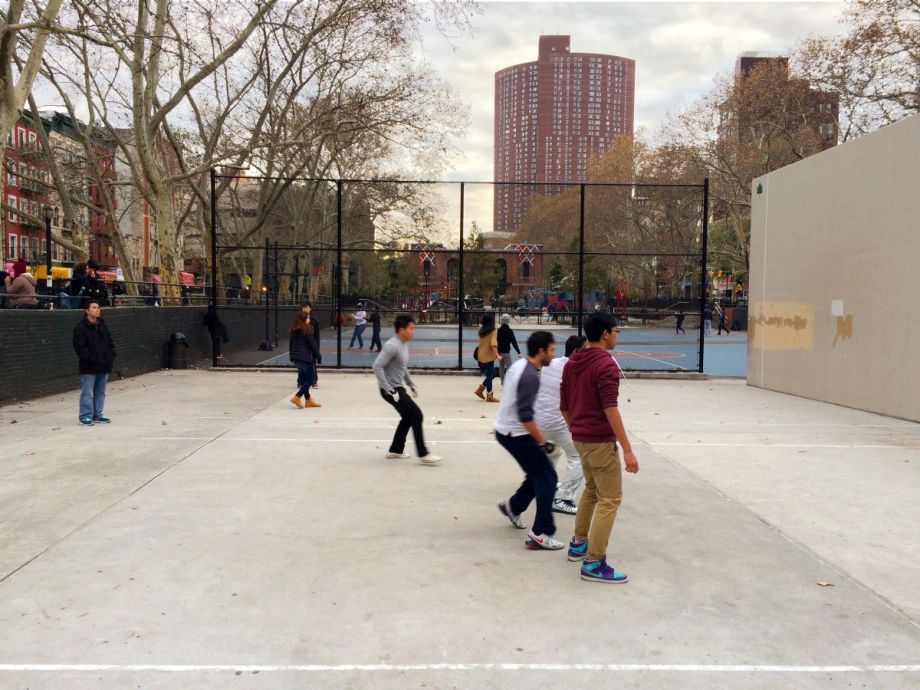 Sara D. Roosevelt Park serves as a backyard, living room and gym for the Lower East Side. (Photo by Gideon Fink Shapiro)

It’s not yet eight o’clock on a brisk morning, but the dozen or so women practicing tai chi, bundled in down coats and scarves, don’t even look cold. Songbirds in bamboo cages chirp with gusto, tended by elderly men. No word yet from the chickens roosting in the community garden. A couple of homeless men doze on benches, seemingly unperturbed by the trucks rumbling by, or the pre-school-age kids clanging sticks on the metal slide of the fenced-in playground.

This is Sara D. Roosevelt Park, a hard-working public space in Manhattan’s Lower East Side. Opened in 1934, it cuts a seven-block-long, roughly seven-acre swath through neighborhoods that have long been, and still are, home to a heterogeneous mix of communities.

Bike polo is another popular activity at the park. (Photo by Gideon Fink Shapiro)

Around lunchtime, a sunken square becomes the site of a lively bicycle polo match. The players, wearing tight clothes and riding fixed-gear bikes, somehow remain upright despite their clashing mallets and the occasional piece of windswept trash in their pedals. People on nearby benches watch the spectacle in between bites from steaming take-out containers.

After school, teens play on handball and basketball courts while Fujianese seniors watch the scene through the glass of the social club across the street. Come summer, there will be soccer played at night, illuminated by high-powered overhead lights.

Spend enough time witnessing the relentless energy of Sara D. and you begin to wonder, how did this unassuming patch of public land built by Robert Moses in the thick of the Depression become such a hotspot? 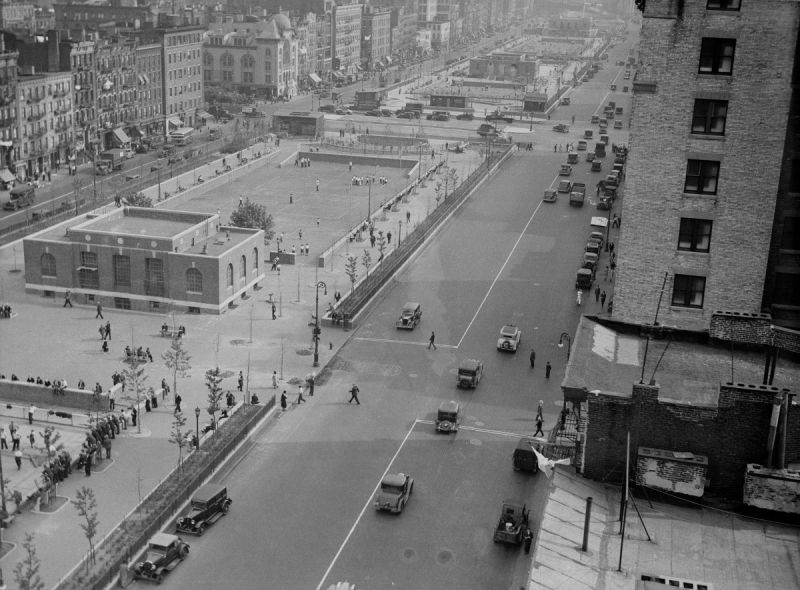 In this 1937 photo, Robert Moses’ no-frills, linear approach to the park’s design is clear. (Credit: City of New York/Parks & Recreation)

The answer is not physical design, but rather the park’s multilayered patterns of use. It serves as a flexible stage for everyday life and events. Although the aging courts and walks could benefit from better maintenance and design details, they successfully lend themselves to a startling range of activities that change with the passing hours, seasons and generations.

Girls playing in the park in 1935 (Credit: City of New York/Parks & Recreation)

Moses began building the park during his first year as head of the parks department. In the decades since, it’s become much more than a place for outdoor recreation and athletics. Today, two subway stations and bike-share docks located along the park as well as dedicated cycling lanes along its borders, make it a part of thousands of daily commutes.

With its transit-accessible location, it’s also become an important neighborhood node, with two schools looking out to its open space and shops lining the opposing streets. The New Museum for Contemporary Art hosts its annual summer block party here.

The New Museum for Contemporary Art hosts its annual summer party at the park. (Photo by Gideon Fink Shapiro)

A cross-cultural dumpling-and-pierogi festival takes place on the basketball courts, which also serve as a rallying point for protest marches. Used-clothing drop-offs and CSA pickups happen regularly. Seniors wander in and out of the Golden Age Center, located on the park grounds.

Unlike the artfully landscaped, high-concept parks built today with the help of massive private funding (hello, Brooklyn Bridge Park!), Sara D. is a simple, linear park, egalitarian and utterly schematic. The center of each block-long section is dedicated to a different kind of sports field, playground, court or garden. Tree-shaded pedestrian promenades run continuously along both sides and cross through the center at regular intervals. These are wider than ordinary sidewalks and equipped with benches, giving passersby the option to stay and watch the action in the center. The park’s flow is interrupted only by intersections with the two largest cross streets, Delancey and Grand; cars on the four smaller streets must go around the park.

Standard-issue furniture and finishes stamp the park with a functional, no-frills ethos. Indeed, it has never aimed for picturesque beauty. Built on land previously occupied by walk-up apartments (and before that, an African-American burial ground from the early 19th century), the Depression-era park was designed to give children a safer place to play than streets and tenement yards, with separate areas for boys and girls. Today, the park’s ubiquitous gray hexagonal paving blocks are interspersed with painted concrete, synthetic grass, rubber tiles and even some shrubs and flowers beneath the tall, regularly spaced London planes and Ginkgos. Moses’ old wading pools are gone, but there is a newer water grove and a series of gardens. 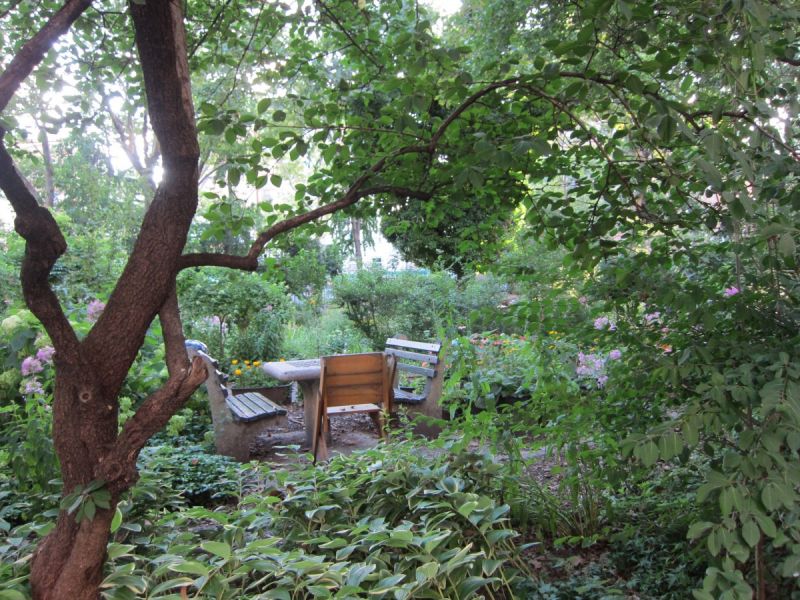 It was never inevitable that Sara D. would thrive. Without the community groups that began to reshape the park in the 1980s, in response to what they perceived as neglect by the city and occupation by drug dealers and users, the park would not be the place it is today. Among the greatest triumphs of the Sara D. Roosevelt Park Coalition, formed in 1982, was the establishment of the M’finda Kalunga community garden in 1983, today more vibrant than ever. Volunteer member-gardeners cultivate their plots and the communal areas, tend to compost heaps, teach school children about ecology, and welcome the public into the lush oasis during select hours. The walled garden, with its chess tables and other improvised add-ons, hosts an endless stream of holiday festivals and planting parties.

A different group, the Forsyth Garden Conservancy, has established several smaller gardens, open to all, in the park since the mid-1990s. Their most famous contribution is undoubtedly the Hua Mei Bird Garden, just off Delancey Street, which they built to accommodate the Chinese songbird owners who had begun meeting informally in the park in the 1980s. They made resourceful use of inexpensive materials such as pipe and rope to create a hanging gallery for bird cages, and planted shrubs to screen the street noise and provide edible berries for the birds.

Sometimes the community groups have clashed over questions like whether to create a new dog run, or a children’s playground in an old section of the park. (The playground won). There are also opportunities for improvement that sometimes get lost in the bustle of various activities. The low brick walls that wrap around the corners of the park at the two cross streets, for example, make it too hard to enter the park where it meets the city. And a currently shuttered building inside the park at Stanton Street should be reopened for public use or youth programming.

But these questions of land use in the park, as well as everyday activities, play an important role in spurring all-too-rare interaction among the neighborhood’s diverse communities: holdovers from the era of Italian and Jewish immigration; African-American, Dominican, and Chinese families; and a newer wave of single, mostly white, young adults. The park, with seven linked and ever-adaptable sections, helps to moderate some of the effects of gentrification by providing space for residents of all stripes to do things they enjoy. And it shows that modern planning and spontaneous street life — frequently personified in the figures, or rather caricatures, of Moses and Jane Jacobs — are not mutually exclusive. This park owes its bones to big planning, and its vitality to everyday people.