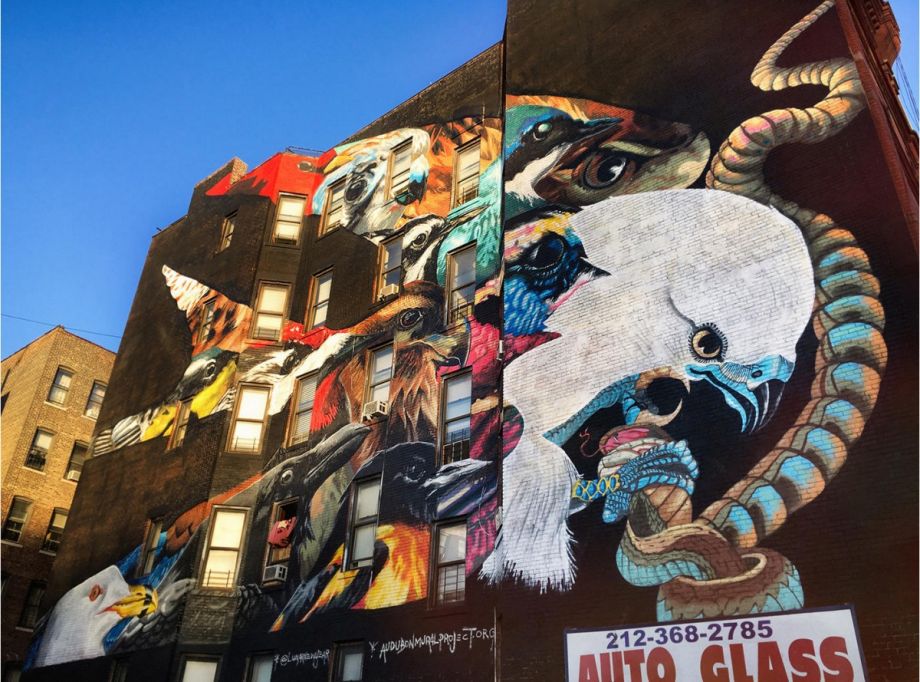 A giant bird mural was just completed in uptown Manhattan, and it’s message goes beyond conservation. It is part of the Audubon Mural Project, a collaboration between the National Audubon Society and gallerist Avi Gitler to create murals of climate-threatened birds throughout John James Audubon’s old Manhattan neighborhood. But its artist, Ecuador-born, Newark-based Lunar New Year, has a different message.

“To me, the idea of a bird is very easily taken as a metaphor for migration and breaking down borders,” Lunar New Year told the New York Times. “I wanted to emphasize all these different birds, different species, coming together as one flock, as we must to save the planet.”

Lunar New Year works in a more political style, emphasizing the struggles of underserved communities, whether downtrodden families in Newark or dispossessed Navajo tribes in the Southwest. He considers his work in Manhattan as being no different.

“It doesn’t matter if you’re human, all communities align with the same struggles and the same fights,” he said. “It’s mismanagement from government or injustice or patriarchy or the overwhelming power of money.”

The piece is located at 155th Street and Broadway and features 13 bird species. According to the Times, the goal of the project is to feature 314 North American birds threatened by the effects of climate change on murals throughout the neighborhood.

After nearly a year of painting, the Audubon Mural Project has decorated 18 properties with 30 birds, though the number of murals has been growing faster because of increasing interest from local businesses and landlords. Mr. Gitler, the curator of the project, hopes to have 25 finished by the end of the month, including three more large murals by street artists like Hitness, Iena Cruz and Gaia.