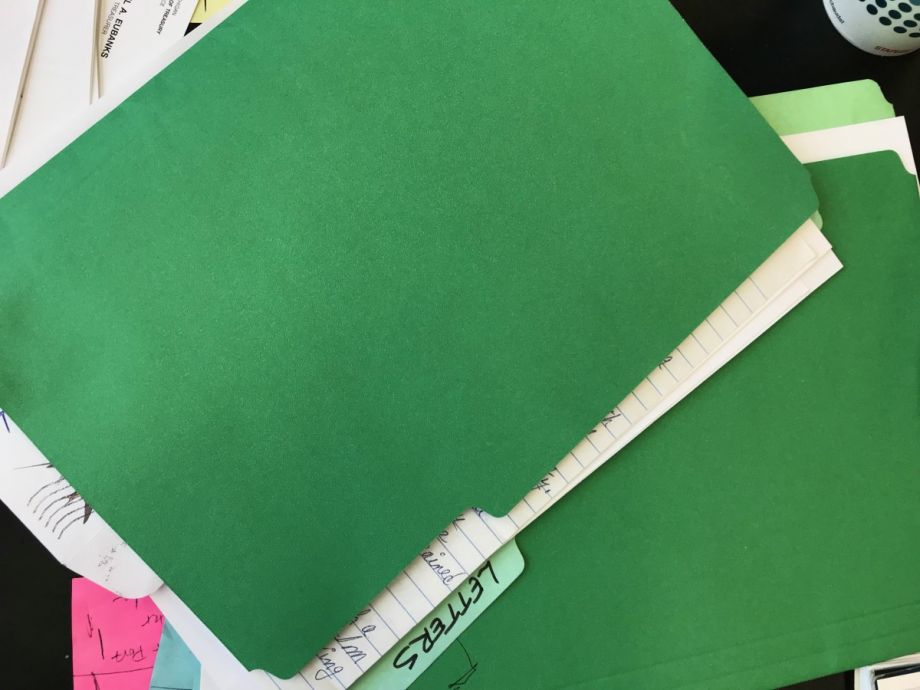 Janeé Ayers gets about five letters a month from incarcerated persons planning to return to Detroit, requesting services for when they are released. (Photo by Oscar Perry Abello)

Among the many items on or near her office desk on the 13th floor of the Coleman A. Young Municipal Center, Detroit City Council-At-Large Member Janeé Ayers keeps a sign for Hogwarts Express platform number nine and three-quarters, a golden snitch, an elder wand, a “#girlboss” placard where her name would otherwise be, and a folder containing letters from currently or formerly incarcerated persons informing her of their release date and requesting assistance with re-integrating back into society.

Ayers says she now gets around five letters like that every month, mostly from people she’s never met. It’s not always clear to her exactly how they find out that she’s the one they should contact. But she has a hunch.

“That’s my sort of moral metric of whether we’re doing the right thing with this task force,” Ayers says, referring to the Returning Citizen’s Task Force, which she convened shortly after being appointed to city council in 2016. (Ayers has since won two elections for her seat, including winning a full four-year term in November 2017.)

The all-volunteer Returning Citizen’s Task Force consists of a core group of returned citizens as well as a range of service providers who work with returning citizens. The group mainly serves as a welcoming squad and “one-stop shop” to connect returning citizens to service providers that task force members have vetted and approved. But the task force also recently celebrated its first major policy victory, with last week’s unanimous passage of the “Fair Chance Ordinance” in Detroit. Ayers credits task force members for helping to craft the early versions of the legislation — an effort that has taken all three years she’s been in office.

“I didn’t want to start this task force with anybody that had not been affected by this,” says Ayers. “It didn’t make sense.”

The new law, which takes effect in August, requires most rental housing in Detroit to follow a “ban the box” policy for returning citizens, covering everything from apartment complexes to single-family homes. Landlords with five or more units in their portfolio will no longer be allowed to ask potential renters about their criminal background until after the landlord has determined that the candidate is qualified to rent under all other phases of the application process. Landlords with less than five rental units in their portfolio are exempt from the law.

While those reintegrating into society still face many barriers, the question remains: how effectively will the law be enforced? Supporters expect the Fair Chance Ordinance to have a positive effect on the 200 people who return from prison to Detroit every month, according to Michigan Department of Corrections data that was analyzed by Ayers’ staff.

“That doesn’t even talk about the ones that were already here,” Ayers says.

Landlords can still deny housing to tenants with criminal records under a range of conditions, but not until after they have accepted their application. As stated in a news release for the ordinance, tenants “may be denied housing only for crimes relevant to the safety of other people or property, like violent crimes, crimes resulting in a lifetime registry on the sex offenders list, arson, etc; or for felonies committed within the past 10 years or resulting in imprisonment within the past five years.”

If the landlord wants to deny an applicant based on their criminal history, the release states, the landlord must allow the applicant to provide evidence of rehabilitation that would show they are a good candidate despite their criminal record. If an applicant feels they have been discriminated against under the Fair Chance Ordinance, they have the right to file a complaint with the city’s Department of Civil Rights, Inclusion and Opportunity. The department will then investigate and if a violation is found, the Detroit Police Department will issue a ticket for a misdemeanor and a maximum $500 fine.

“It’s no mandate that [landlords] must take these applicants as tenants, but at the very least, I think it’s a fair ask that folks get a fair shot and avoid having two piles of applicants, those that don’t have felonies and those that do,” says Justin Johnson, who helped get the Returning Citizen’s Task Force up and running while working three years for Ayers as director of community engagement.

Ayers’ father has been one of those 200 returning citizens — multiple times over the course of her entire life. It’s been about ten years since he last got out, Ayers says.

“I think this is the longest he’s been out of jail my entire life,” she says. “I asked my dad what are the things you would have needed to stay out. That’s really where the inception of the task force came from. I partnered with him and four other gentlemen who had served almost twenty years apiece to really form this task force.”

Among that initial group Ayers mentions were folks such as Mario Bueno and Rick Speck, who along with Camron Colts founded LUCK, Inc., which offers training, educating and mentorship to the “most at-risk populations” in Detroit. (Speck originally agreed to speak with Next City for this story, but postponed because of a family emergency.)

Besides working on the initial drafts of Detroit’s Fair Chance Ordinance, the first year of the Returning Citizen’s Task Force was largely spent vetting service providers to become part of the task force.

“One of the first things we did with the task force was start to weed people out,” says Ayers. “Some groups say they do this, but then you get there and they don’t do a damn thing. When you’ve been failed from a service provider, that adds another layer.”

The task force started meeting regularly, on the fourth Monday of every month — though it has since shifted to a quarterly meeting schedule. The locations vary, from churches to schools to community organizations. Coming downtown to the Coleman Young Municipal Center can be “too much,” Ayers says. Folks may not have a driver’s license yet, or easy, reliable access to public transit. Not to mention, it’s the same building that houses the city’s courtrooms.

Given that the task force also has Michigan Department of Corrections data showing which zip codes see the most people returning from prison every month, it makes sense to bring their meetings out to them, as often as they can.

“There’s a direct correlation with unemployment and poverty issues in those same zip codes,” says Johnson. “If we’re doing any justice to the residents of our city, we would fix this issue and not have folks in so much a dire need it creates a crisis. A lot of violence could be avoided if folks had a peace of mind about how they are getting treated in the community.”

Johnson, whose brother has served two prison terms, no longer works for Council Member Ayers, but continues to work closely with the Returning Citizen’s Task Force in his capacity as political director at SEIU Local 1 in Detroit. Staying connected is essential to maintaining the reputation the task force has earned — a reputation that has spread the word virally enough that people in the prison system send unprompted letters to Ayers requesting services on the day and time they get out. It took a lot of work to get to that point.

“A lot of the folks who participated in those early conversations didn’t have a lot of faith in the system we were trying to bend in their direction,” Johnson says. “From having experience with service providers in workforce development failing them, entering into programs and finding out it isn’t what it seems or the outcomes these organizations promised to them not materializing. There was a lot of skepticism, but also a lot of hope because we had a real mechanism to amplify the message that this needed to happen.”

Making good on enforcement of the Fair Chance Ordinance will be an upcoming challenge for the task force, especially given the ease with which landlords have historically been able to disguise ownership of multiple buildings by creating a shell company for each of the buildings they own, making it difficult to hold them accountable for building code violations or other challenges to tenants’ rights and safety.

“I worry about landlords all the time, in this city in particular, at this time, you’re looking at shell companies doing a lot of craziness,” Ayers says.

But the timing of the Fair Chance Ordinance is fortunate — in 2017, as part of efforts to bring rental buildings up to code, the city passed an ordinance requiring all landlords regardless of their portfolio size to register their units with the city. The registry requirement is rolling out by zip code, on a schedule for all covered zip codes to be registered by the end of 2019.

“It wasn’t something that we planned, it just happened to shake out like that, and I’m really thinking now that it worked for our benefit because they’ve already had to get that registry together and start identifying bad actors,” says Ayers.

After housing, access to jobs is the next top priority for the Returning Citizen’s Task Force. The packet they mail to every returning citizen who contacts them includes a list of employers who have expressed a prior interest in hiring people with a felony on their record. The current version of packet lists 129 interested employers, including grocery stores, other retailers, hotels, fast food companies, tech companies, and major manufacturers.

For a city trying to shake its reputation as the “shrinking city,” it’s an economic and political imperative to make sure those who make the choice to come to Detroit can access the housing and jobs they need to stay in Detroit. For now, Ayers talks with pride but also concern for the 200 people moving from prison to Detroit every month who still face many barriers.

“How do we talk about making this a world-class city if we aren’t addressing these problems?” says Ayers. “We can’t move this thing forward unless we’re really moving everybody.”