Designer Imagines an S.F. Airbnb Stay Circa 2200 – Next City 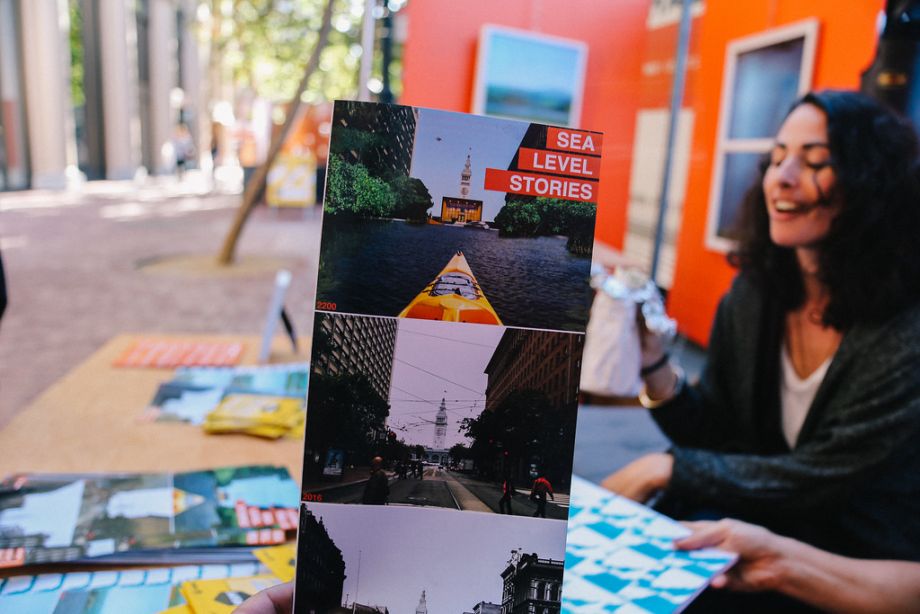 The year is 2200, and you’ve just arrived in your downtown San Francisco Airbnb (because of course future San Francisco still has Airbnb). There’s a kayak you can borrow to navigate the city’s flooded streets and an air filter mask to protect against airborne particulates. A note from your host encourages you to stay hydrated in the desert weather and to enjoy the local tequila and saltwater potatoes. As for drinking from the tap, well, now that water is scarce, and a premium filtered bottle can cost more than $400, most buildings in the city recirculate their wastewater.

This “apartment” belongs to fictional urban designer Jara Aniton, and it’s not really an apartment at all. The project was a sidewalk installation at the Market Street Prototyping Festival in October. Developed by Johanna Hoffman, a resilient design associate with the Urban Fabrick Collaborative, Jara’s home was created to make the abstract, global conversation about climate change and sea level rise personal, emotional, domestic. And it was intended to help visitors grapple with a simple, yet hard-to-confront truth: Seas are already rising. We have no choice but to adapt, but we also don’t have a lot of places to share how we feel about it.

“Change is so scary, but I think what we were really trying to do with this project was approach it as a given and not as a question,” says Hoffman. She and her collaborators, artists Genevieve Hoffman and Tony Gannon, wanted to spark a conversation about how negotiating climate change is really about “embracing more degrees of change into our urban fabric and into our communities.”

To do so, the installation, dubbed Sea Level Stories, acknowledges the earth has been changing since time immemorial. “Sea levels have been rising and falling for a really long time throughout the millennia,” says Hoffman. In her decor and notes to the visitor, Jara is depicted as an urban designer fascinated by the history of San Francisco. Her living room walls are decorated with images of the city, starting with the most recent ice age about 12,000 years ago, when sea levels were much lower and the Bay Area was a river valley, and spanning into a future based on climate projections. False “windows” show the world outside the apartment: San Francisco as “23rd-century Venice,” seas 25 feet higher than they are today.

Visitors to the installation, which was on Market Street for three days, were also invited to borrow objects they’d need in this future world. Picking up the oars or sunscreen triggered audio clips explaining their use. (Temperatures in San Francisco can reach 120 Fahrenheit in year 2200.) Recordings of wetlands and interviews with local residents and experts on Bay Area history looped throughout the day. Visitors were asked to respond to six questions regarding their own reaction to sea level rise and a shifting climate, including a fill in the blank: “When I think of climate change, I feel — .”

“I’m finding more and more in what I do and in the work of other folks, that when we’re able to give people a more emotional access point to the information, it has a greater chance of resonating,” says Hoffman.

People’s responses to Jara’s apartment spanned the spectrum from excited to confused to sad to angry. “We got a lot of ‘scared’ but we also got a lot of ‘motivated,’” she says.

Some even had a sense of humor about it. Asked to respond to the prompt “As seas rise, I want to — ,” some people wrote, “learn to surf.” Hoffman acknowledges some of the responses were facetious, but they also have a grain of truth to them. To confront a disorientating reality, we’re all going to need to learn to make lemonade out of lemons.

We’ll also need places to reflect. Visitors came up with some tangible proposals for the future of San Francisco — floating walkways, mangrove forests — but Hoffman says in the end the installation was less about how to deal with sea level rise and more about creating a space to process uncertainty, to start imagining an unimaginable future.

That future will look different place to place, and Hoffman is now thinking of taking the concept on the road. At every site, she’d engage in new research and create new visualizations for the world outside Jara’s windows. As a designer, Hoffman says she loves maps, “but not everyone can relate to that map view as easily.” People are more moved by images of their own city monuments, their own city streets, and seeing them transformed by rising seas, desertification and other effects of climate change. That is, people are affected by what’s personal to them.

Hoffman is also motivated to make a traveling exhibition by a desire to hear how geography and culture affect these conversations. “What we think is really fascinating are the different words people use to talk about change, and how different cultures and communities again relate to these aspects of uncertainty with the impacts of climate change coming our way,” she says.