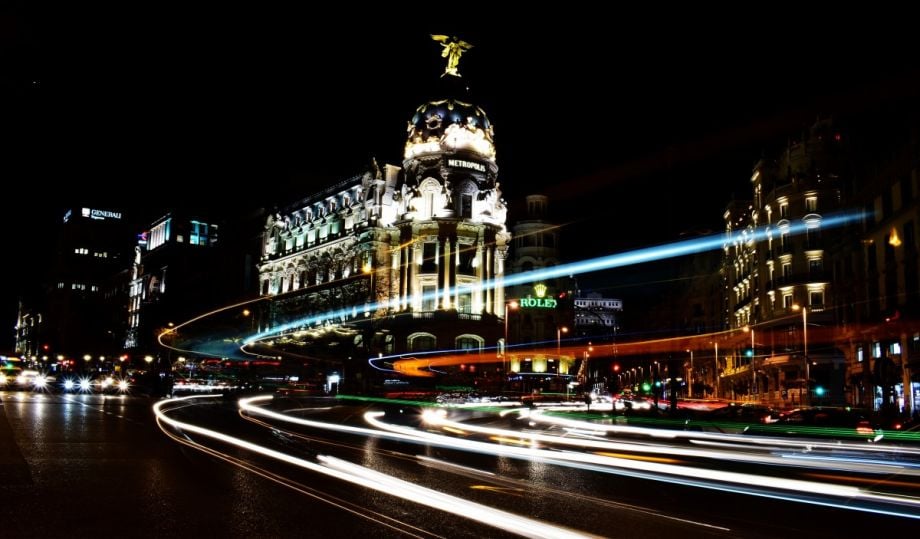 (Photo by Carlos Zurita, via Unsplash)

After years of failing to comply with EU environmental regulations, the city of Madrid, Spain, is getting close to implementing a plan to improve air quality. The Plan of Air Quality and Climate Change, or simply Plan A, includes 30 measures to be rolled out between 2018 and 2020 and has a budget of 543.9 million euros ($645 million U.S.). If it succeeds, it will not only result in a large reduction of polluting emissions, but could also change the city dramatically.

Motor vehicles are the main source of many air pollutants, including particulate matter, nitrogen dioxide and carbon monoxide, and 21 of the plan’s 30 measures have to do with sustainable mobility. These include putting restrictions on private cars — both in driving and parking — and investing in public transport and active modes of transport such as walking and cycling. The city expects to reduce the levels of particulate matter by 20 to 30 percent, of nitrogen dioxide by 20 percent, and of carbon monoxide by 30 percent.

The most visible measure will be the creation next year of a “zero-emissions zone” in the center of the city. Measuring about 4.5 square kilometers (1.75 square miles), the zone covers four areas that already have car restrictions, and further extends them and provides continuity. Only residents, public transport and zero-emission vehicles will be allowed to drive there. Initially, delivery vehicles will be allowed to circulate on some schedules, but restrictions will be adopted over time to keep the most pollutant cars out. Similarly, the city’s own current fleet will be gradually replaced with low-emission vehicles. By 2020, gas cars registered before 2006 and diesel cars registered before 2014 will be banned from entering the zero-emissions zone — even for residents.

The plan also contemplates the restructuring of several major streets, both within and outside the zero-emissions zone. This reorganization will reduce the space devoted to cars to make room for bus lanes and bike lanes.

Madrid’s changes will not be restricted to the most central areas. In the beltway that circles the core of the city the speed limit will be reduced to 70 km/h (about 43 mph). And at the city fringes, “park and ride” facilities will be created in the vicinity of large bus and metro stations.

Samir Awad, a civil engineer at urban mobility firm Hécate Ingeniería, which is headquartered in Madrid, says he thinks the plan is “brave.” But he has concerns about the amount the city has budgeted for implementation, considering that about 60 percent of the funds will be allocated to renew the city’s fleet. In his opinion, interventions that affect the shape of a city have a larger impact on the sustainability of its means of transport.

“I also miss, for example, financial aid to delivery companies so they can adapt their fleet in such a short period as the plan demands,” Awad says via email. “This lack of budget and of realistic terms in some of the measures could hinder the plan.”

Another red flag for Awad: The plan fails to acknowledge the problems associated with the current structure of the public transport network, which in his opinion is too centralized. Although he notes that at present Madrid only has jurisdiction over the city bus network, he believes that this issue should have been reflected in the final text.

“One of the measures could have been an agreement with the Community of Madrid [the regional government, responsible for most of the public transport network] to act on this matter,” he says.

Lucas Davis, a researcher at University of California, Berkeley, who recently studied the impact of car restrictions on air pollution in Mexico City, is optimistic that the plan can improve the situation, but believes that it is critical to monitor the impact during implementation.

“It will be important to collect data on what works and what doesn’t work,” Davis says via email. “Some of the measures will be successful and this should be documented, while others will not, and will be important for policymakers to be willing to modify and optimize these programs as better information becomes available.”

Madrid also intends to revamp the Plaza de España, a popular square, and Gran Vía, a main thoroughfare. Although these projects are not part of the air pollution plan, they point in the same direction, taking away space from cars to create bike lanes and large areas for pedestrians.

The zero-emissions zone is expected to be in place by June.