Madrid’s Goal for Fewer Cars Is Tested With Street Closure 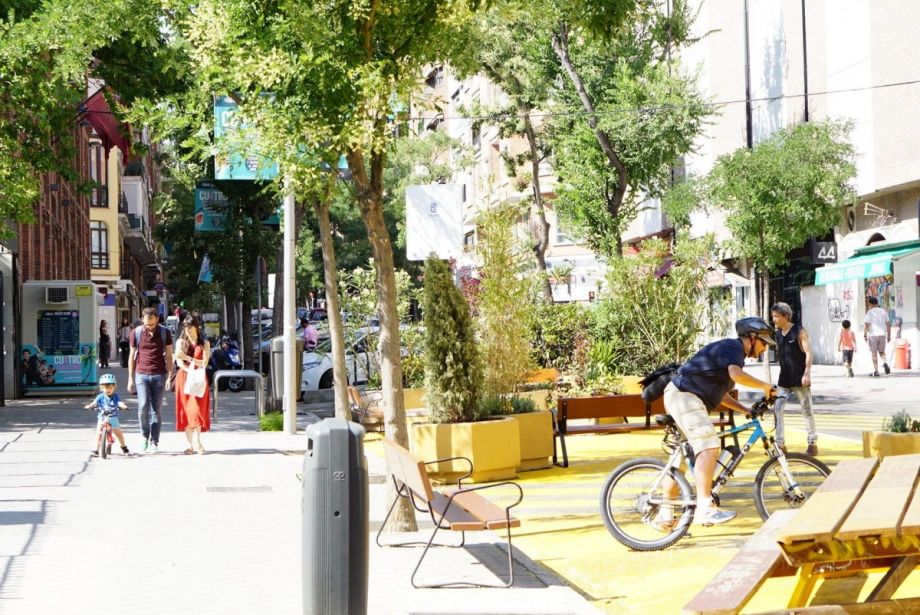 The center of Madrid is famously quiet at the height of summer, when residents head to the mountains or the beach to escape the oppressive heat. But on this weekday afternoon in July, one street, Calle Galileo, is quieter than most. What’s missing: the sound of cars and the whine of mopeds. These noises are ubiquitous elsewhere in the Spanish capital, but here, just a couple kilometers north of the city’s historic heart, in the Chamberí neighborhood, they’ve been replaced with nothing more than the sound of conversations coming from the outdoor tables of a half dozen bars and children loudly kicking a ball between one another.

Calle Galileo looks different than a typical downtown street too. Bar tables spill off the sidewalk and onto what would normally be car territory. Small trees, large plants in concrete troughs and solid wooden benches serve as borders. Bright yellow road markings warn motorists to stay away.

They’re all part of a 12-month pilot project, begun in late June, designed to promote more walking and less driving in Madrid, which is consistently named one of the cities with the worst air quality in Europe.

Under the progressive Mayor Manuela Carmena, Madrid has taken steps to reduce pollution. The city lowers speed limits when nitrogen dioxide levels get dangerously high. There’s also a goal to close Gran Via, the six-lane highway running through the heart of the Spanish capital, to cars by May 2019. But smaller-scale “urban acupuncture” approaches like this Calle Galileo test could prove equally important in changing general attitudes and behavior.

Officials hope that, while simply closing 70 meters of a single road may seem negligible in the face of citywide pollution or congestion, the trial might encourage residents to reimagine what an urban street can be. Families might get used to having a car-free space for their children to enjoy, or commuters will learn to embrace cycling and want the change to be permanent.

Jorge García Castaño​, councilor for the district, is encouraged by similar approaches around the world, most notably in Medellín, Colombia, and Curitiba, Brazil.

“Chamberí has the fewest green zones and open spaces in all of Madrid,” he says. “So, while this might not be the right solution everywhere, here it makes sense to try out partial and reversible pedestrianization.”

The specific location was chosen, he adds, because it’s also home to a cultural center and a small park. The hope is that the old boundaries between the street, park and center will become increasingly blurred, creating a shared space few will be willing to surrender to motorists.

Not everyone is convinced. For neighborhood action group Chamberí Se Defiende (“Chamberí Defends Itself”), Calle Galileo has become the center of a conflict between the Madrid City Council and some local residents and small businesses.

“Of course we want safer spaces for our children and cleaner air for everyone, but it was obvious that type of scheme won’t work here,” says spokesperson Belen Arsuaga Ferreras as she puts up fresh posters advertising a demonstration against the project. “This is central Madrid, not New York or a completely different city many thousands of miles away.”

One key objection, voiced prior to the erection of the barriers, was that, far from becoming a child-friendly space, the closed-off section of road would instead serve as a new addition to Madrid’s famously vibrant nightlife scene.

“The benches and tables are just used for botellons [street drinking in groups] and so now it’s far noisier than it was when you had cars coming through here,” says Arsuaga Ferreras. This project, and others designed to make central Madrid less reliant on the car, are “an insult to older people” she adds.

Chamberí is home to more over-70s than almost any other in Madrid. For them, cycling is not as easy and a car is often essential. Many complain of feeling intimidated by the crowds that open spaces can attract, making then feel unwelcome in the very place they have called home for decades.

Opponents of the experiment argue that partial road closures are inherently doomed to fail given the needs of a modern city. Since emergency vehicles still need to pass through, one half of the road is still open, and this is used by taxis and motorbikes. Since no-driving rules are extremely difficult to enforce, parents are reluctant to let their children play in the closed-off space.

“And, of course, unless you ban cars from the city completely, they will have to go somewhere,” says Arsuaga Ferreras. “Even now there are traffic jams on the surrounding streets. When children go back to school and people go back to work after the summer, it will be a nightmare.”

One month in, reaction elsewhere on the street in July is mixed, from bar patrons happy to be able to sit and drink outside without having to breathe in car fumes, to shopkeepers wary of losing business. Chamberí Se Defiende has vowed to keep on fighting the “joke” imposed on them, though supporters are hopeful the partial road closure will become a permanent fixture.

“It’s all about soft intervention,” says Garcia Castaño, “about encouragement instead of punishment.”

He points to the example of Calle Fuencarral, a traffic-heavy Madrid road up until 2008 that’s now a pedestrianized thoroughfare thriving with shops. Doubters had argued that closing Fuencarral to cars would hurt businesses and see the street run over with prostitution. “But in the end, people saw how little changes can make a big difference to city life,” he says, “and I’m confident we can carry on making small interventions for the better.”

David Hewitt is a freelance writer and editor focusing on climate, sustainability and conservation. He divides his time between his native England and Spain, where he is completing a Ph.D. on modern Spanish history and society.