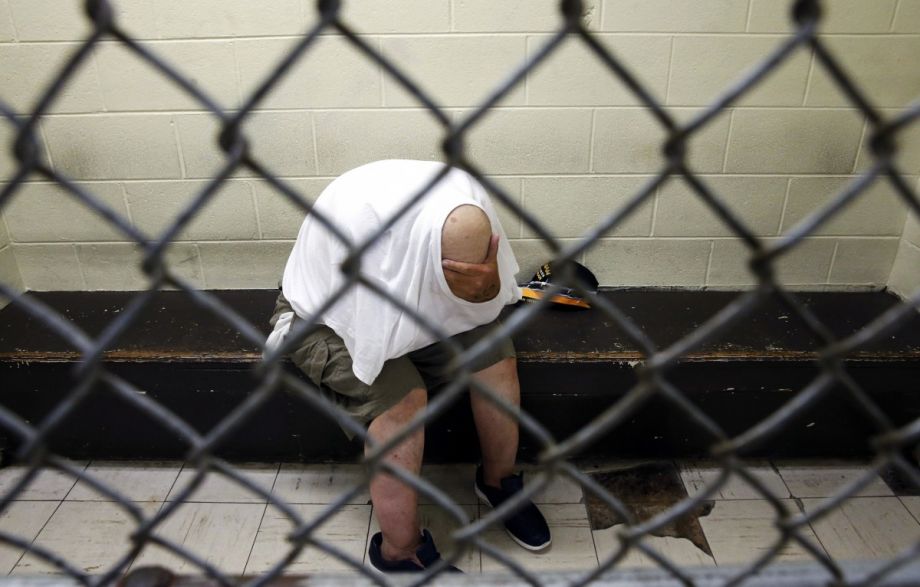 A U.S. veteran with post-traumatic stress sits in a segregated holding pen at Chicago’s Cook County Jail after he was arrested on a narcotics charge. (AP Photo/Charles Rex Arbogast)

About 12 million people pass through America’s 3,000 jails each year. Many are awaiting prison sentences. Many are mentally ill. Many are people who can’t afford bail.

The MacArthur Foundation today announced a new grant intended to help address this aspect of America’s mass incarceration problem. In its first phase of a five-year, $75 million funding program, the Chicago-based organization is giving 20 jail systems $150,000 each to look into reducing their number of inmates. (Note: Next City receives funding support from MacArthur.)

According to an AP article:

The selected corrections systems will design a plan and work with experts to coordinate judges, prosecutors, court administrators, police and corrections officials to make the criminal just system run more efficiently … . From the 20, half will then be picked for a second round of funding of $500,000 to $2 million next year to put the plans in place.

The nation’s biggest jail systems in Los Angeles, New York City, Chicago and Philadelphia were selected for the planning grants, as well as smaller lockups … .

This month, the Vera Institute of Justice released, “The Price of Jails: Measuring the Taxpayer Cost of Incarceration,” which found that though the U.S. Department of Justice estimated that the 2011 cost of jails was a prodigious $22.2 billion, that’s actually a vast underestimate.

In addition to the $1.1 billion spent by the City of New York Department of Correction in 2014, other city agencies spent an additional $1.3 billion for jail employee benefits, health care and education programs for incarcerated people, and administration, bringing the total cost to $2.4 billion.

Health care, medicine, services, and food for inmates add up quickly. Ultimately, the Institute advocates, reducing the number of people behind bars is the most effective taxpayer move:

Just last week, Cook County Sheriff Tom Dart announced that he had appointed a clinical psychologist to run the system’s jail in Chicago, noting that he believed Nneka Jones Tapia to be the first mental health professional named to such a job. Talking to NBC Chicago, Dart pointed to problems beyond sheer inmate numbers.

“No longer can we view jails and prisons as places that happen to house mentally ill inmates — incarceration and mental health treatment have been infused, they are one and the same,” said Sheriff Dart. “Dr. Jones Tapia is ideally suited to oversee the country’s largest jail and catalyze our efforts to reform the broken criminal justice system.”

The Cook County Jail is one of the largest in the country. Dart has complained that the lack of mental health treatment programs has turned his jail and others into dumping grounds for the mentally ill.

Of the MacArthur money going to Chicago, Chief Cook County Circuit Judge Timothy Evans says in a statement, “For the past two years, the criminal justice stakeholders in Cook County have worked cooperatively and collaboratively on reforms that have led to an increase in the number of people who can be safely released while awaiting trial, and to many efficiencies in court processes. The awarding of the MacArthur grant is key to those efforts, because it marks the first time that all stakeholders have joined forces to obtain funding to support our mission to implement system-wide change.”

According to New Orleans’ WWLTV, city officials say they will use the grant to work with expert consultants to develop a plan for local justice system improvement:

“Since I became Sheriff, the average daily inmate population has been reduced from more than 6,000 inmates to less than 2,000 inmates today,” [Orleans Parish Sheriff Marlin] Gusman said.

Gusman sited initiatives such as the Fast-Track Program, the Day Reporting Center for probationers and parolees, and the Southeast Regional Re-Entry Program as examples of the Sheriff’s Office’s effort to reduce over-incarceration.

New York will also get a grant. The city’s largest jail system, Rikers Island, made national news this month when two inmates sued the City of New York and a corrections officer they say repeatedly raped them, accusing the city of indifference to a “pervasive culture” of abuse of female inmates in the city jail.

According to the AP article on the new MacArthur program, the funders also hope to deal with issues of community trust when it comes to the U.S. justice system:

… jails in two cities at the center of high-profile deaths of black men by white police officers in the past year, in St. Louis County, Missouri, which includes Ferguson, as well as Charleston County, South Carolina, which includes North Charleston, will be receiving grants.

“Our bigger ambition than just reducing the population really goes to the fairness and equity of the system,” said Julia Stasch, MacArthur’s president. “We really believe that the hyper incarceration in this country really starts there in local cities and counties.”