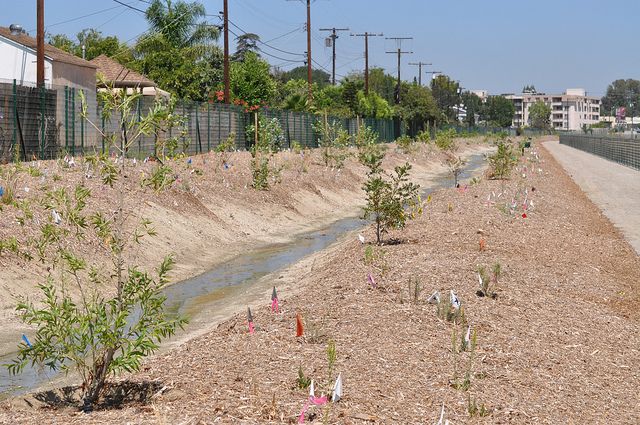 The Tujunga Wash, a stream in Los Angeles where a green restoration project seeks to capture as much as 325,000 gallons of water for drinking. Credit: U.S. Army Corps of Engineers

The twin problems of water scarcity and pollution due to runoff trouble many cities in the Southwestern U.S., not to mention a number of global cities that have mimicked Sun Belt sprawl. But nowhere have these issues come to a head more so than in Los Angeles.

Like much of Southern California, Los Angeles relies on the Colorado River for its drinking water, which travels to the city via a 242-mile aqueduct. It’s not the most efficient water system, and L.A. has routinely topped lists of the nation’s thirstiest cities. Meanwhile, swimmers at area beaches remain at risk from high levels of pollution, 47 percent of which comes from dirty water that flows into the ocean following rainfall.

Now, the city has begun taking steps to address both its lack of drinking water and severe runoff problems. On Sunday, the New York Times reported that L.A. is pursuing a strategy meant to incentivize greening projects that can not only capture rainwater, but also filter it for drinking. This two-pronged approach, then, could prevent pollution from flowing into area waterways while simultaneously delivering clean water to local reservoirs.

Achieving this goal will most likely involve making green infrastructure retrofits that can naturally retain rainwater. The Los Angeles Regional Water Quality Control Board has imposed new rules meant to encourage different cities in the region to collaborate on such projects.

“During a year with average rainfall,” reads the website for one restoration project on the Tujunga Wash waterway, “as much as 325,000 gallons of water will flow through the naturalized streambed and will produce enough groundwater recharge to provide 760 families of four with drinking water for an entire year.”

While most Angelenos agree that the city needs new water sources, the Times reports, they are divided on how best to pay for it. A proposed fee on Los Angeles County property owners, meant to raise $290 million for a stormwater retrofit project, met strong opposition and has been put on hold.

Los Angeles could take cues from a report, released last month from the Natural Resources Defense Council and partner organizations, that makes recommendations on how to attract investment in green infrastructure projects. Holding up Philadelphia’s Green City, Clean Waters program as a model, the report suggests ways for enticing the private sector to help foot the bill.

Under the Clean Water Act, municipalities around the country must prove that they are working to reduce polluted runoff.

U.S. cities in search of solutions can look north to Toronto. As Leda Marritz wrote in January, the Ontario capital’s Green Development Standard has an ambitious stormwater mandate and sets strict guidelines, such as soil minimums for street trees, to help the city meet it.

Back in Southern California, L.A.’s own river could provide a major venue for water-retaining retrofits. Right now, the Los Angeles River looks like little more than an open concrete drainpipe. But as Nate Berg reported in a March Forefront story, consistent grassroots advocacy has led to a gradual reimagining of the river that now has the support of city leaders. Greening even a portion of this 51-mile channel would go a long way toward securing a healthy, hydrated future for Los Angeles.