L.A. Rail Expansion Promises Construction Jobs for People Who Can Actually Ride It – Next City

L.A. Rail Expansion Promises Construction Jobs for People Who Can Actually Ride It 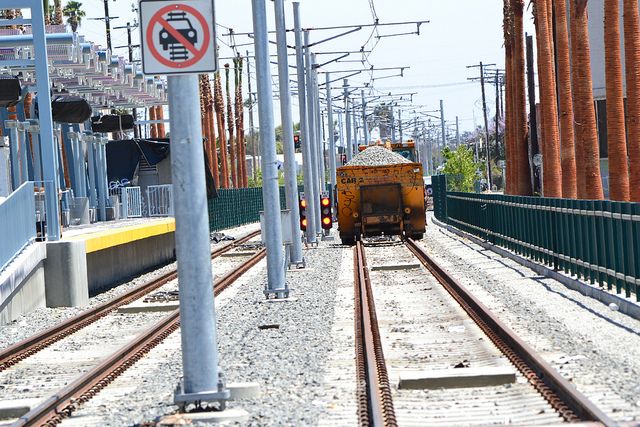 Construction along the Expo Line, which will hook up with the new Crenshaw Line. Credit: ExpoLightRail

Los Angeles is expanding its light rail system. The new 8.5-mile Crenshaw/LAX transit project in southwest L.A. will connect Inglewood, Hawthorne and El Segundo, and link up with the Metro Green Line, which sort of goes to LAX.

The $2.06 billion project is expected to create an estimated 7,800 jobs and be up and running in 2019. That’s five years of steady union wages for constructions workers, and the Los Angeles Metropolitan Transit Authority (L.A. Metro) has agreed to a hiring mandate with its contractors: 40 percent of the work hours must be performed by employees from “economically depressed” areas.

On Sunday about 300 gathered in the Leimert Park neighborhood, where the Crenshaw Line will pass through, for a rally focused on job creation spurred by the new route. Officials have many fears to address along this future transit corridor: As the Los Angeles Sentinel reported in April, zero black people were brought on during the first phase of hiring in December 2012. By January, black people only made up 2.65 percent of the project’s workforce.

“It just feels like people who do the hiring look at me and where I’ve been in life and there’s a lot for me to overcome,” Andre Hollins, a 29-year-old father of twins who attended the rally, told the L.A. Times.

At Sunday’s rally, L.A. County Supervisor Mark Ridley-Thomas sought to make it clear that things have changed. “This is economic justice in real time,” he said, promising to penalize contractors who don’t follow the mandate.

Should the city follow through on Ridley-Thomas’ promise, it could lead to the kind of local procurement policy that makes for a more equitable future. Developers behind large infrastructure projects always talk about job creation and economic impact, but more often than not they do little to help those living in neighborhoods affected by their work. Jobs on big, publicly financed projects in L.A. often go to workers from elsewhere, whether it’s San Diego or Nevada. Now, at least 40 percent of those man hours will pay union wages to folks from Inglewood to El Segundo.

It’s not all rosy along the Crenshaw Line, construction of which should begin in the spring. After Leimert Park fought to win a stop along the line, minority business owners in the mostly black neighborhood were notified that their leases won’t be renewed, according to Our Weekly. Landlords see the potential for gentrification along the corridor and are moving swiftly.

“We fought so hard to get the station,” said local business owner Laura Hendrix. “Then I wondered if we would still be here to enjoy it.”

And despite the $2.06 billion and public support, the new line will still stop short of LAX. The nation’s third busiest airport isn’t served by a metro line, though the Green Line — infamously nicknamed The Train to Nowhere — cruises nearby. Rather than feed into the terminals, it drops passengers off at a parking lot 2.5 miles away. There’s no promise as to when an extension might open, though officials have said it could be as early as 2020. (Residents aren’t holding their breath.)

Even though the mandate accounts for less than half the construction time on the Crenshaw Line, it’s consistent with L.A. Metro’s procurement vision — the agency’s contract for a new fleet of buses in February had an American jobs clause — and should serve as a model for transit authorities across the country.

Now, if Metro could just stretch that Green Line to domestic departures.