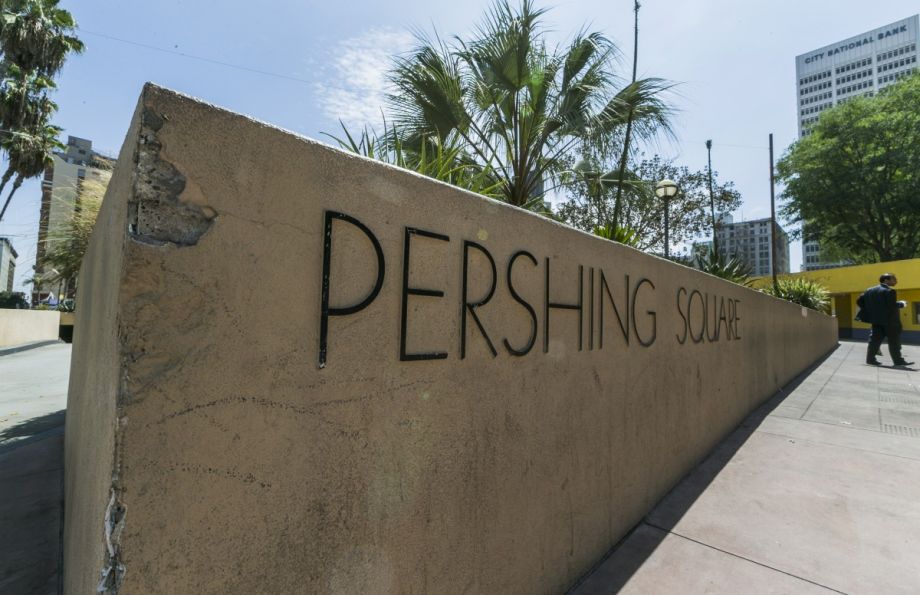 If Don Johnson and Kim Jong Un designed a public space together, they might come up with something like Los Angeles’ Pershing Square.

Though flanked by some of Los Angeles’ stateliest Beaux Arts buildings — most notably the Biltmore Hotel — Pershing Square is pure Miami, with a bright yellow pergola and an inexplicable nonfunctioning purple bell tower. Then again, it’s also pure totalitarianism. The same 1992 redesign that brought the follies and bold colors also built parapets, curb cuts and expanses of concrete that cordon off the square from the surrounding sidewalks and make it look more like a bunker than a park. It does not exactly encourage public assembly.

“It’s closed off, not welcoming and very self-conscious … it goes to show how immature Los Angeles is as a city,” says Brigham Yen, a downtown real estate broker and author of the blog DTLA Rising. Without the centuries-long history of pedestrian traffic that East Coast cities have, the square tries to inspire pedestrianism rather than respond to it. That approach “backfires,” according to Yen.

For all of these reasons, Pershing Square earned the dishonor of a spot on the Project for Public Space’s list of “world’s worst squares and plazas.” That list came out in 2004, but it confirmed something that Angelenos have known all too well.

Now, an effort is afoot to finally do something about it.

Next week, three finalists will be chosen in the Pershing Square Renew Design Challenge. They will be chosen from ten semifinalists, who were named in October, that include not only some of Los Angeles’ most august architecture firms but also some of the most renowned international firms.

They have all been drawn to the competition because Pershing Square’s failure is, literally, world famous. “This is the worst example of a public space in America,” Yen says. “It is also the most important public space left in America that hasn’t been revitalized.”

It may yet become the center that Los Angeles is so often accused of not having. Pershing Square’s moment has arrived now in part because the rest of downtown Los Angeles is already in the midst of a transformation. Pershing Square Renew is a public-private partnership sanctioned by the city and funded in part by MacFarlane Partners, which is developing a high-rise residential tower adjacent to the square.

Sponsors wrote the request for proposals with little design guidelines but a straightforward goal: It must attract people. Period.

“I think the approach is very strategic in the way that we asked teams to respond to this. It wasn’t prescriptive in asking for ‘two retail kiosks, etc.,’” says Brian Glodney, an urban designer at design firm Gensler and co-chair of the Pershing Square Renew design committee. “It was much more performance-driven.”

Yen says that the participation of so-called starchitecture firms could result in flashy designs that have little to do with the reality of Pershing Square. “From a rendering, they can make something look ‘wow,’” Yen says. “When it comes down to how it’s actually going to interact with the pedestrians in the city, that’s going to be a whole different story.”

Pershing Square Renew’s design challenge therefore presents an exercise in restraint. Just as the current design is overproduced, the winning design may turn out to be the one that is the most understated. “We’re thrilled at the quality of the talent that we’ve been able to attract,” says Eduardo Santana, executive director of Pershing Square Renew. But, he cautions, “we’ve said very clearly: Don’t approach this as the next wonderful portfolio piece that’s going to win awards.”

In other words: no purple towers. In fact, the new Pershing Square may end up looking like the old Pershing Square. A century ago, it was a typical two-dimensional mix of pathways, trees, grass and benches, not unlike New York City’s Madison Square Park. And it attracted all sorts of passersby, not unlike San Francisco’s Union Square, which Yen considers Pershing Square’s successful twin.

One problem that the design is unlikely to solve is that of homelessness. Los Angeles famously has the largest homeless population in the country. Skid Row, the semi-official neighborhood where sidewalk encampments are tolerated, is a few blocks east of Pershing Square. Homeless often make up a sizable portion of Pershing Square’s daytime population. A makeover could lead to clashes and tension, which have already arisen elsewhere in a downtown that has added tens of thousands of new residents in the past two decades. Loft apartments and restaurants have replaced flop houses and dive bars. The wholesale jewelry stores that flank Pershing Square’s south and east sides are expected to soon give way to more upscale retailers.

As for when work will start on the square, however, Santana says no construction budget has been set — and no funds have been secured. He says, though, that “the political will is there,” and the budget may reflect similar park redesigns elsewhere. The 1995 redesign of New York City’s Bryant Park cost $18 million; Grand Park, which opened last year in the Los Angeles Civic Center, cost $56 million. “We’ve finally seen the economy come back and be able to tackle a project of this scale and scope,” Glodney says.

With a design team chosen by April, Pershing Square Renew hopes to secure funding to put the reopening of the square on track for 2019. Now that he has hung up the linen suit, perhaps Don Johnson will chip in.