How Homelessness Is Shifting in Los Angeles – Next City

How Homelessness Is Shifting in Los Angeles 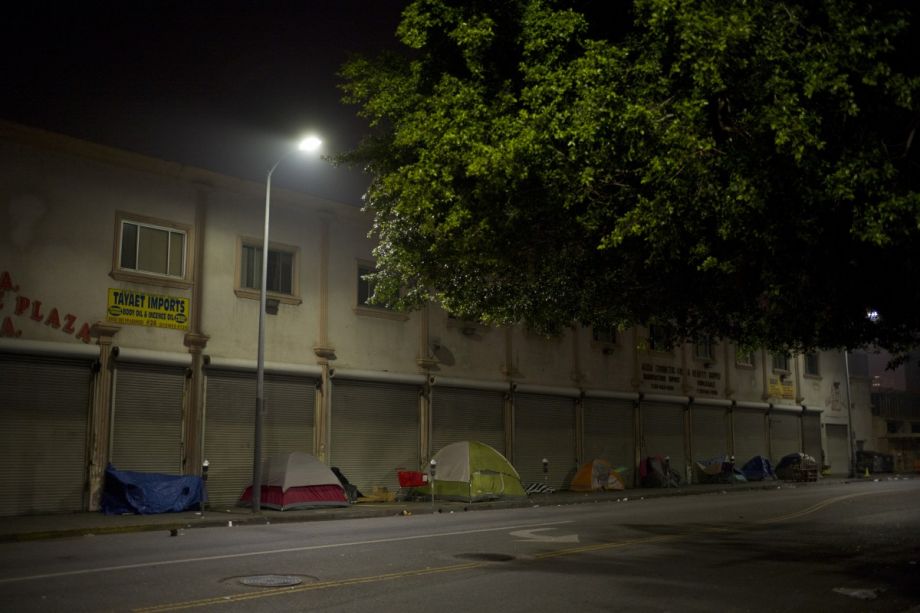 More homeless people in Los Angeles are leaving Skid Row for other more visible areas of the city, such as parks and near freeways. A recent count revealed a 12 percent rise in the homeless population in the last two years, but according to a report this week by Marketplace, the location shift has several reasons.

Some of the increased visibility is the result of lawsuits. Until the city can supply more affordable housing, the homeless can legally camp on sidewalks from 9 p.m. until 6 a.m.

The police are also restricted in the way they deal with people’s possessions.

“If they take somebody into custody, then law enforcement needs to take all of their property,” says [a street outreach advocate]. “They need to input it. They need to store it.”

Itemizing all that stuff can take hours. It’s not just tents, but piles of belongings. Some of it’s essentially trash, and the cops don’t have a place to store it. For police, those are big incentives to look the other way.

That’s not the only way L.A.‘s homeless population is becoming more visible, however. As Next City reported last fall, an effort to bring high design to social services shelters has yielded an uncommonly beautiful respite for formerly homeless Angelenos in Skid Row’s new Star apartment building:

Until now, Skid Row’s mostly low-rise buildings didn’t even appear in the skyline — out of sight, out of mind. Now, Mike Alvidrez, the executive director of Skid Row Housing Trust, the developer of the sleek Star, hopes, perhaps the homeless will be seen.

L.A. has also turned to technology and big data to try to help homeless people access resources. Last fall, a group of public and private interests, including the L.A. Housing Authority, L.A. County Health Services and the Chamber of Commerce, earmarked $213 million to broaden a computerized system that more efficiently links homeless people to necessary services.

Mental illness, high rents and being in transition leave many Angelenos with few options save homelessness. Los Angeles also leads the nation in number of homeless veterans, a title Mayor Eric Garcetti hopes to relinquish. According to the Los Angeles Times, he and federal officials have pledged to house every homeless veteran by the end of the year, and in January, the Mayor said he was more than halfway to his goal. Earlier this year, Next City’s Alexis Stephens reported that following a class-action lawsuit, the Department of Veterans Affairs announced a strategic plan to put its 387-acre tract in West L.A. to better use and create more permanent housing.

However, Marketplace reports that advocates say they’ve seen a rise in middle-aged homeless people, some victims of recession-era job loss.

“I think homelessness is not just a social problem,” People Assisting the Homeless CEO Joel John Roberts told Marketplace. “It’s a poverty problem. And until this country addresses poverty, we’re always going to have homelessness.”