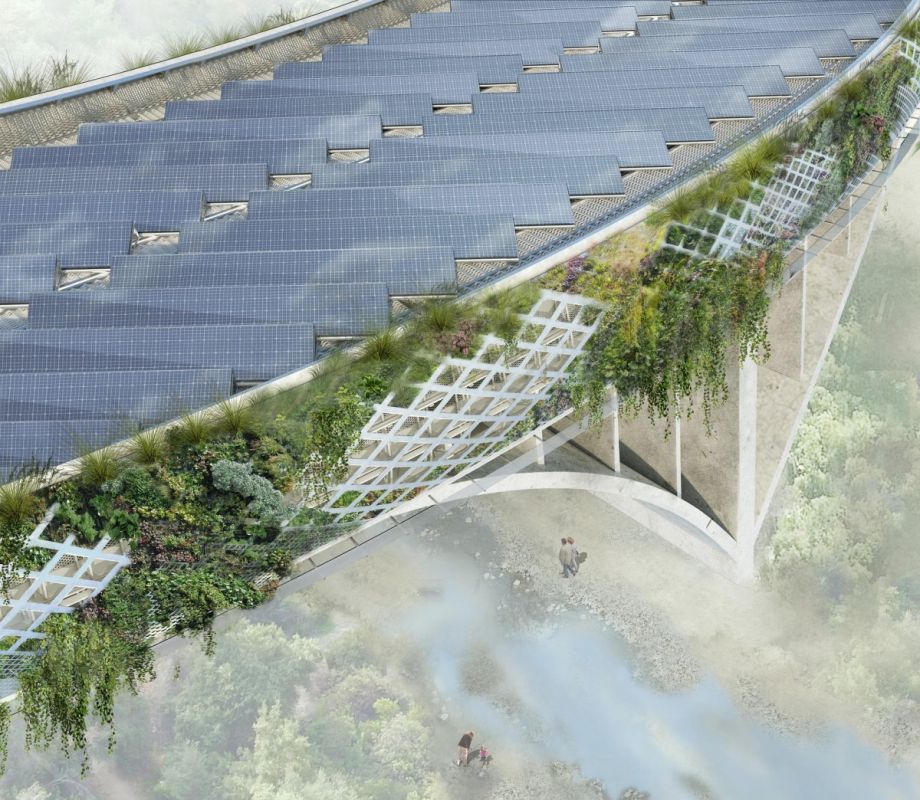 Freeways cover 527 miles of Los Angeles County. Could all that space be used to benefit the environment? In his Thursday column, Los Angeles Times architecture critic Christopher Hawthorne raised the question, as part of an ongoing look at redesigning 20th-century freeways to meet the demands of the 21st century. This week, the Times published the first of two proposals reimagining sections of Los Angeles freeways. The first, from L.A.-based Michael Maltzan Architecture, looks anew at the Arroyo Seco Bridge, a section of the Ventura Freeway.

Maltzan’s design, produced in collaboration in the L.A. office of engineering firm Arup, wraps the freeway bridge in porous tunnel, what Maltzan calls a “new infrastructural overlay.” For nearly three-quarters of a mile, acoustically insulated walls would reduce traffic noise by up to 65 percent. Auto emissions would escape through a perforated aluminum ceiling into concrete “lungs” treated with titanium dioxide, which would capture 516,000 tons of carbon dioxide per year.

Rainwater would collect in a pair of drums that can each hold 750,000 gallons. Some would be used to water the hanging plants on the tunnel’s exterior; the rest could be contributed to Pasadena’s water supply. Arup estimates as much as 5 million gallons per year. Photovoltaic panels on the top of the tunnel would produce about 6 million kilowatt-hours per year, enough to power 600 homes. Again, Maltzan suggests those energy cost savings be passed back to the city, in the form of budget assistance to schools located within two miles of the bridge.

With the proposed changes, the highway would no longer be just a mode of transportation, but “an environmental machine,” says Maltzan. He and Arup have not worked out a cost estimate, and Hawthorne acknowledges the immense political cooperation required to bring such a project to fruition: The city of Pasadena, Los Angeles County and California DOT (Caltrans) would all need to be on board. “Certainly it would require a significant philosophical shift for Caltrans to approve the idea of cities piggybacking on state infrastructure to generate local revenue,” writes Hawthorne.

But, he says, the time has come. The U.S. DOT has recently been highlighting the damage done to communities by highway building, and launched an initiative to reconnect severed cities. With Maltzan’s design, Hawthorne writes, “what you see seeping out from the new freeway bridge into nearby neighborhoods is not a plume of pollution but a spreading zone of benefits: an expanded wildlife corridor, better equipped schools, improved air quality.”