Where Change Is a Bulldozer, Can an L.A. Neighborhood Grab the Wheel? – Next City

Where Change Is a Bulldozer, Can an L.A. Neighborhood Grab the Wheel? 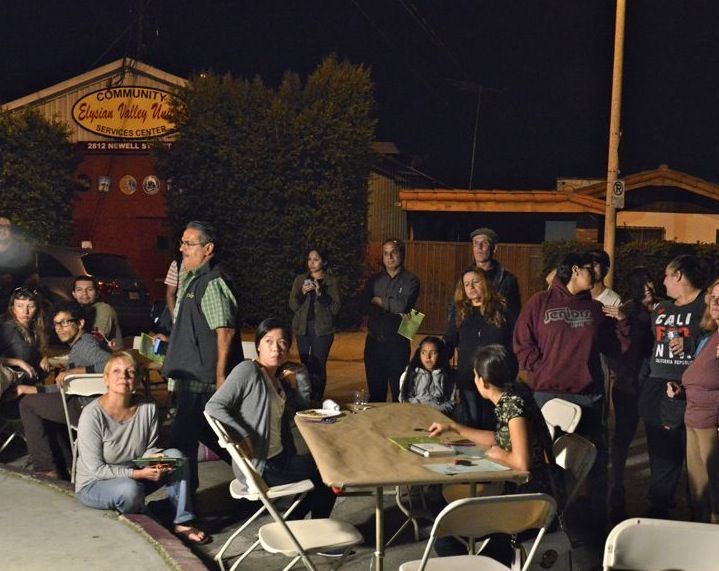 An outdoor workshop that informed the Futuro de Frogtown report. Across the street is the Elysian Valley Community Services Center. (Credit: LA-Más)

“Elysian Valley has been a sleepy town for many, many years,” says David De La Torre, current head of the Elysian Valley Neighborhood Watch and a resident of the Los Angeles neighborhood for 35 years. “It goes unnoticed. A lot of things go unnoticed. I’ve described it in years past as Mayberry: quiet, not on everybody’s radar, but with an amazing mix of people.”

Colloquially known as Frogtown — from the days when amphibians from the L.A. River frequented the neighborhood’s streets and fell prey to lawnmowers on a daily basis — Elysian Valley is being roused awake. The community of nearly 9,000 primarily working class and largely Latino and Asian residents is experiencing the same real estate development pressures experienced throughout L.A., but with an increased urgency because of an upcoming billion-dollar reinvention of the L.A. River.

In addition to external forces, an emerging DIY arts community is implicated in the neighborhood’s integration into L.A.’s hipsterfied ecosystem.

Amid this change, the community design organization LA-Más has a released a report, Futuro de Frogtown, which re-centralizes the goals and values of long-term residents into the future strategic planning process for the neighborhood. From the report’s executive summary: “Rather than have market forces shape the community, this project provides recommendations that would direct market forces to incorporate social and community goals into the development process.”

“The goal of the report was not necessarily to determine future real estate growth or to dictate what happens but really just to provide a cushion and to go through the neighborhood to see what people think,” says Helen Leung of LA-Más. “What are some ways that we can shape a future, especially with so much money coming in?”

Six neighborhood meetings — what Leung describes as being “iterative workshops that were discussion-based, scenario-oriented provocations” — informed the final document. In addition to findings related to zoning, affordable housing and infrastructure, Futuro de Frogtown identifies the desire of local residents to connect an existing network of informal businesses to the economy of the future.

Participants of the informal economy — plumbers, carpenters, food vendors, childcare providers and more — are a strong presence in the neighborhood. “They used to walk to work when [manufacturers and other industries] were down the street, but as they have closed, they’ve informally operated those businesses from inside their houses,” says Leung.

In the workshops, residents expressed a desire to formalize their businesses through efforts like legalizing street vending, assisting people in applications for necessary permits, getting discounts on space rentals within new development projects, and customizing small business incubation programs.

A notable anecdote from the report honestly recounts the distrust residents feel about newcomers, including fears about projects like LA-Más’ too: Their workshop with the highest attendance occurred after a resident circulated an email with inaccurate information about a plan to tear down homes as part of the remodeling of the Los Angeles River Bike Path.

Leung cites the area’s ugly history as an understandable context to the occurrence. Many older residents lived through the disruption of mid-20th-century urban planning related to the construction of the I-5 freeway, the eviction of families from Chavez Ravine in order to make way for an unrealized public housing project, and the construction of Dodgers Stadium.

“Those memories are still really poignant in the minds of family members who have been here a long time and remember being displaced or they know people who have been displaced,” says Leung. “That’s a real fear. Distrust of the government and fears of eminent domain still exist for many longtime residents.”

De La Torre also acknowledges that distrust of the larger Los Angeles power structure was one of the reasons he helped found the Elysian Valley Neighborhood Watch five years ago: “We had a very bad relationship with law enforcement agencies and people were not reporting crimes and not feeling quite trustful. [They were] hesitant and really reluctant to accept that something good could happen if they could be more engaged.”

The organization lent support to LA-Más for Futuro de Frogtown by circulating notices, hosting workshops, and publishing updates about the project on their website and in their newsletter.

“Some people in the community think we’re just being paid at the hands of the developers to promote high-density change and gentrification,” Leung professes. (Futuro de Frogtown was funded by the founder and director of local nonprofit arts organization Clockshop and the creative director of Elysian, a restaurant and private event venue.)

“For other people, they see us — and this is also how we like to see ourselves — as acknowledging that stopping change in a community is really hard. Rather, why not help shape change in the best possible way? … How do we move forward in a way that maximizes [the neighborhood’s] potential and respects its history through an equity lens.”

“Elysian Valley was discovered and it became this shiny object that everyone seemingly had their eye on,” adds De La Torre. “How do we balance the development that is coming in and the changes that will follow with that development, so that informal economies can benefit? … My challenge and hope is that as this new money comes into the area, that the taco stand, the caterer and the carpenter that operate out of their own houses are included in the winners.”