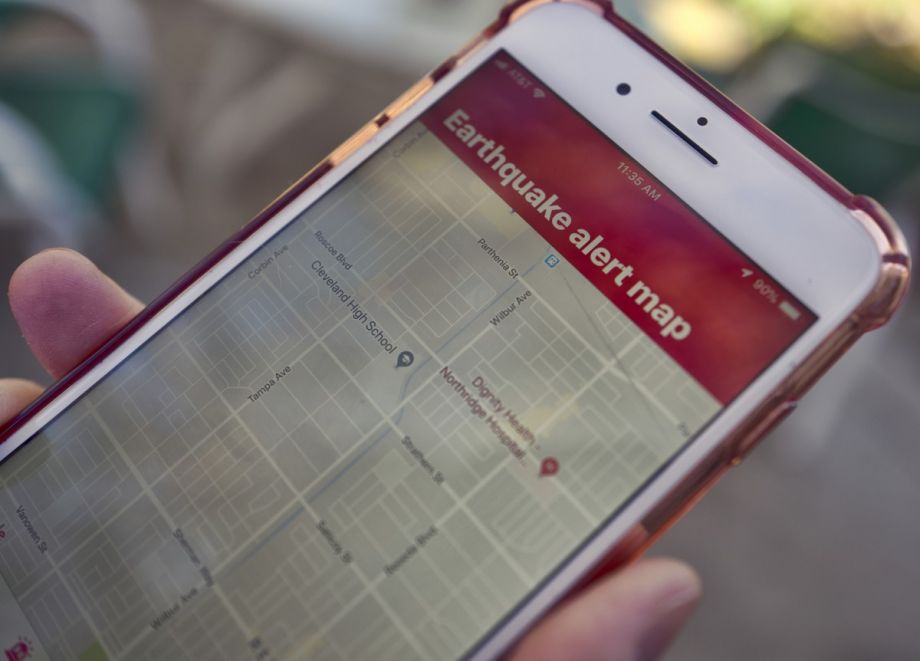 A mobile phone customer looks at an earthquake warning application on their phone in Los Angeles on Thursday, Jan. 3, 2019. Los Angeles has released the app that could give LA County residents precious seconds to drop, cover and hold on in the event of a quake. The city announced Wednesday that ShakeAlertLA is available for download on Android and Apple phones. (AP Photo/Richard Vogel)

The smartphone app, for iOS and Android phones, is designed to give users a few seconds’ warning before an earthquake arrives at a user’s location — before a user feels the shaking.

Shake Alert could save lives by warning drivers to pull to the side of the road, to help people find cover, and potentially even tell trains to slow down, as similar systems do in Japan.

As the LA Times says, the alert system won’t be perfect. The system relies on the fact that modern communications systems — and the less destructive “P” waves — travel faster than the devastating “S” waves which cause most earthquake damage. So an earthquake that starts at the Salton Sea could give Angelenos a minute to prepare before the seismic wave arrives in the city. But an earthquake that started closer to home won’t have the same lag, so residents near the epicenter of a quake won’t benefit from early warnings.

And false alarms are not just possible, but inevitable. A study published in the scientific journal Science Advances last year found that there’s no “magic formula” for deciding when to issue an alert. It’s impossible to tell if an earthquake will turn into “the big one” from its earliest rumblings, so emergency managers have to make tradeoffs between the cost of inaction and the cost of sheltering for a false alarm.

The study authors conclude that earthquake early-warning systems are the most beneficial for people who are willing to take cover even with the risk of false alarms, because by the time a quake’s strength is obvious, there’s precious seconds remaining. In one hypothetical case, early alerts gave users 48 seconds of warning, while waiting until the quake’s strength was known gave users only eight seconds.

The Shake Alert app uses data from the USGS Shake Alert system, which the USGS has been developing for years, using seismometers across California, Oregon, and Washington, USA TODAY reported. Using the same data, the Bay Area’s BART system has been slowing or stopping trains in response to possible quakes for years, according to UC Berkeley’s news office. ShakeAlert 2.0 is more accurate and provides more seconds of warning, the university said.

In Japan, earthquake warning systems helped prevent high-speed trains from derailing during the 2011 magnitude 9.1 earthquake, which meant that there were no fatalities on the bullet train that day. Children had time to get under desks, and several million people near the epicenter of the quake had at least 15 seconds to find shelter.

More than half of injuries from earthquakes are from things falling on people, UC Berkeley seismologist Richard Allen told Science News. Getting people to take cover could halve the number of earthquake-related injuries, he said.

For Angelenos, most of the early reviews of the app are positive, although the app has yet to be put to the test. And that’s just fine with most folks. “Hopefully I won’t have to use it anytime soon,” one user tweeted.