No Millennial Branding Scheme for This L.A. Car-Share Plan – Next City

No Millennial Branding Scheme for This L.A. Car-Share Plan 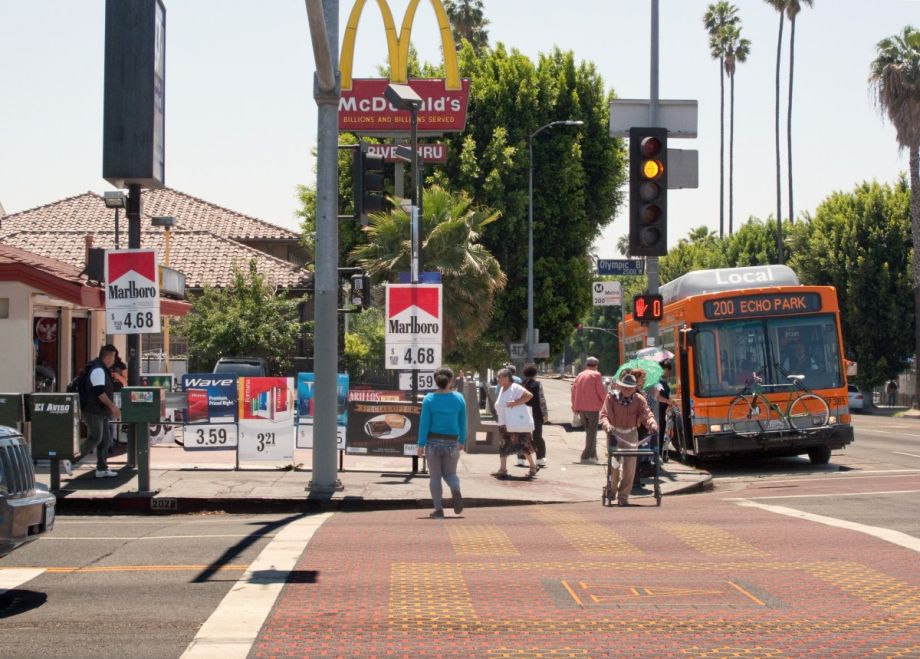 The Pico-Union neighborhood in L.A. could get an electric car-sharing program thanks to a new program. (Photo by Downtowngal)

Limited transportation options and high levels of air pollution disproportionately impact people living in low-income neighborhoods in Los Angeles, which tend to be far from public transit connections but close to busy freeways.

Car-sharing programs like Zipcar or Car2go could lessen both problems by providing cars on an hourly basis, but the cost of their services can add up quickly and companies tend to locate in higher-income neighborhoods where profit margins are larger. While Zipcar has publicly discussed the need to make car-sharing more accessible to all, Los Angeles is working on a plan to upend current business-as-usual. The city, famous for smog and traffic congestion, plans to launch an electric vehicle car-sharing program specifically targeted at low-income residents.

The EV Car Sharing Pilot for Disadvantaged Communities, still in its formative stages, would put 100 electric and hybrid vehicles and over 100 charging stations in several neighborhoods, including the Westlake District, Pico-Union, South L.A. and Koreatown.

The California Air Resources Board (CARB) is funding the pilot through a $1.6 million grant. California’s 2014 Charge Ahead Initiative set a goal of one million electric vehicles on California roads by 2023. Under this law, CARB must increase access to electric vehicles in disadvantaged communities too.

“No city before has devoted this level of resources to the expansion of car-sharing,” Sharon Feigon, executive director of the Shared Use Mobility Center, told NBC Los Angeles in July. SUMC is a public interest organization partnering with the city to design the program and will serve as primary subcontractor.

In addition to providing cheaper access to transportation, the emissions-reducing EV aspect of the program is intended to improve air quality, as well as introduce members to a new and growing technology.

“[For-profit car sharing companies] tend to focus in dense areas with a kind of millennial focus, in both their marketing and outreach and how they position themselves,” says Feigon. “And I think what we’re talking about is really structuring the program and promoting it in a way that’s going to make sense to a much broader cross section of the population.”

In 2008, Buffalo CarShare in New York State sought to expand car-sharing beyond its usual demographic too. More than 50 percent of that program’s members had household incomes of less than $25,000 per year.

“This was not an option. This was a need,” says Michael Galligano, executive director.

The nonprofit adapted its model from services offered in San Francisco and Philadelphia, where the percentage of low-income users was closer to 5 percent. To cater best to its community, Buffalo CarShare did things a little differently.

Because of barriers to Internet access, they had a storefront location where users could come in and pay with credit, debit, cash or money order. Because so many users were unbanked, Buffalo CarShare started partnering with local banks and referred members there. They forewent traditional marketing in favor of educating people door-to-door about their transportation options.

But the nonprofit was forced to halt operations in June this year — after Philadelphia Insurance ended its coverage. The state’s insurance laws make covering Buffalo CarShare, and other independent car rental and sharing companies, unprofitable. In September Zipcar announced it would be acquiring Buffalo CarShare’s assets and membership and relaunching the service.

Galligano says he’s pleased this vital program will return to the community. “[Zipcar] seems to be very, very engaged, with social equity at the forefront.”

But he laments that New York State law makes transportation innovation so difficult. “There’s so many innovative ideas out there, and California facilitates those ideas with laws that make sense in the shared economy,” he says.

The details of L.A.’s program are still being worked out. The Los Angeles City Council should vote to approve the grant at the end of this month. SUMC will then work with the city to create a steering committee of community-based organizations to oversee marketing and outreach, and shape program specifics like car and charging station locations and membership costs.

The first step, though, is for the city and SUMC to put out a request for proposals from existing car-sharing operators, like Zipcar or Car2Go, to be the program’s vendor and provide the vehicles and insurance. The grant funding will take care of startup costs and infrastructure, after which Feigon says, with high utilization rates the program is supposed to sustain itself.

In the future, says Feigon, more ride-sharing programs could be added to the mix. “You have to create an ecosystem where you have lots of options,” she says.