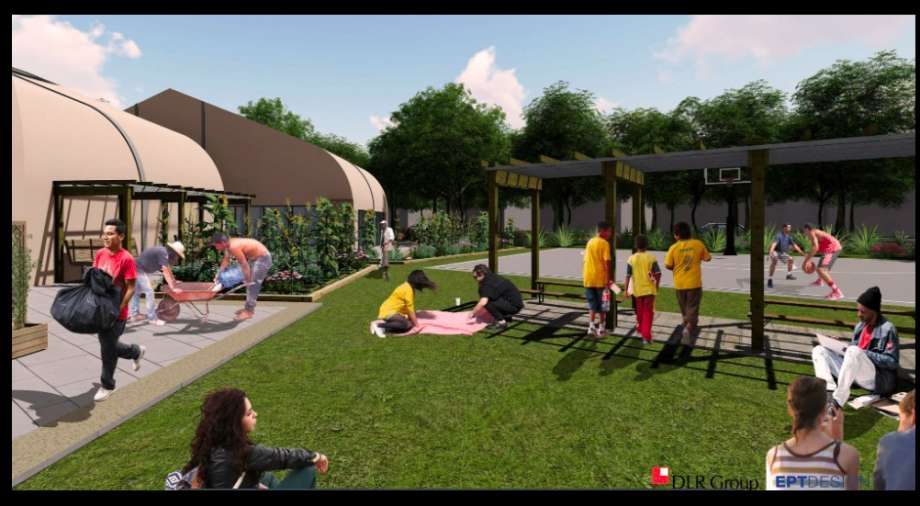 A rendering from EPT Design and DLR.

The first shelter in a $20-million project to address Los Angeles’ homelessness crisis opens in August — and it’s had what the LA Times calls “a rocky start.” The collection of trailers situated between busy streets and a freeway is anything but inviting, and to compensate for its lackluster surroundings, designers added a $700,000 interior deck, pushing the shelter beyond its budget.

A group of architects working pro bono wants the city to get the next shelter right (15 total are planned). Three teams, recruited by the Urban Land Institute, have released designs to help the project overcome its two greatest obstacles, the Times reports. First, there’s “the reputed aversion homeless people have for the dreary conditions in shelters.” Second, the “almost inevitable community opposition that shelter proposals encounter.”

The plans all have courtyards that invite community interaction, with semi-secluded areas where residents can engage one another, and more private living spaces inside the tents.

“It was a really interesting way to look at the organization of that space and really making these newly housed people feel that they are a part of the community they are in,” De Briere told the paper, “as opposed to this big foreign tent that’s been blocked off and segregated from the community.”

A rendering from RELM/JFAK Architects.

As Next City has covered, designers and landscape architects are increasingly turning their attention to cities’ thorniest problems, from inmate recidivism and prison conditions to transitional housing.

Of course, not everyone is designing for good. Hostile design — walls covered in spikes, benches sliced down the middle so no-one can recline, boulders dumped beneath overpasses — is also being used by city governments to deter “loitering,” a.k.a. being destitute in public.

“These designs [legitimize] the point of view that homeless people are the enemy,” British artist Stuart Semple told the Art Newspaper earlier this year. “Instead they need support, often with addiction or mental health.”