Looking for Equality in Public Spaces – Next City

Looking for Equality in Public Spaces 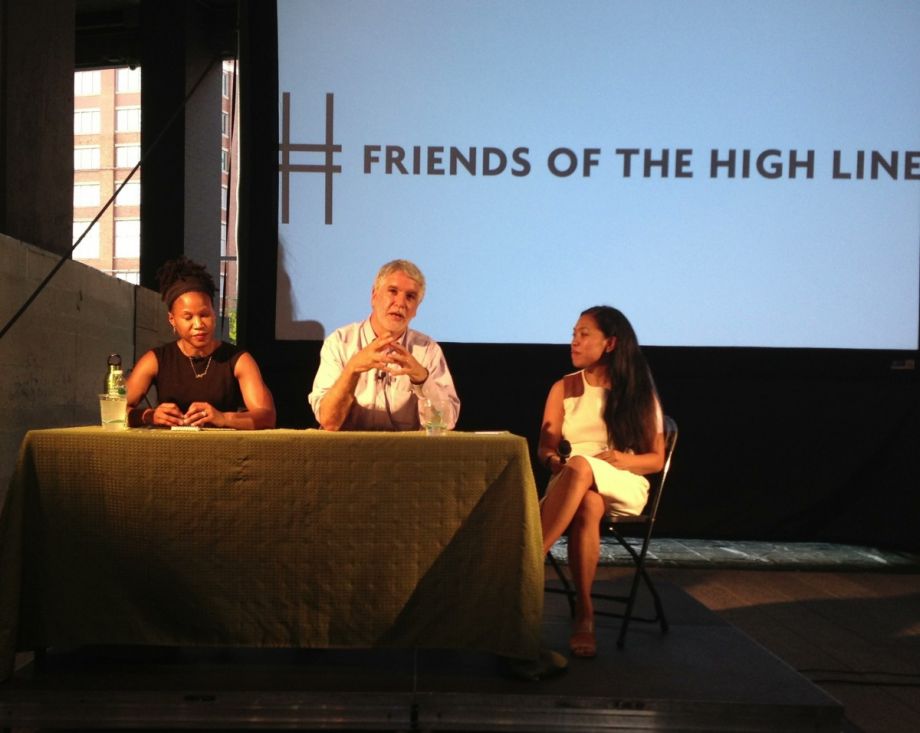 That was the message from Enrique Peñalosa, former mayor of Bogotá, Colombia, and Majora Carter, founder of Sustainable South Bronx, this week in a panel discussion at New York’s High Line Park. The subject was “Building Equitable Cities and Public Spaces,” the second in a three-part series called “Beyond the High Line.”

As mayor of Bogotá, Peñalosa was famous for leading a fight to create better conditions for pedestrians, cyclists and transit riders on the city’s streets. “I was almost impeached over stopping people parking on the sidewalk,” he said, showing “before” pictures of cars parked all over pedestrian pavement in the heart of the city, and “after” pictures of the same streets freed up for people to walk safely.

Creating public space where people are safe from automobiles, Peñalosa emphasized, is key to creating a more equitable city. What’s remarkable about cities today, he said, is that we consider it normal that citizens’ lives are regularly threatened by, and lost to, motor vehicle traffic. Think about how different cities could be, he said, if they were organized around robust bicycle and transit infrastructure.

Peñalosa showed pictures of some of the high-quality bike infrastructure his administration had built in Bogotá, including a 25-kilometer bicycle route going through poor neighborhoods. Excellent bike infrastructure, he said, sends a message. “It says that a citizen on a $30 bike is as important as one in a $30,000 car.”

Peñalosa also spoke about the importance of adequate parkland, especially in cities being developed today. “Pleasures we derive from things we buy wear out,” he said. “Parks are different from other public goods. Parks are a magical good whose capacity to provide joy does not wear out.”

The equitable construction and maintenance of park space is a central issue for Carter as well. Sustainable South Bronx, the non-profit she founded in 2001 and ran until 2008, pioneered the creation of park space along the borough’s blighted waterfront.

“We were being told we needed more garbage dumps,” Carter said. Instead, her group cleaned up a riverfront garbage dump using $10,000 in seed money, then parlayed that into a $1.25 million federal transportation grant for studying and planning the South Bronx Greenway. That money, in turn, led to the city of New York putting $50 million into constructing new parks in the poorest congressional district in the nation, a process that is ongoing and will continue for years.

Carter, who still lives in the South Bronx where she grew up, still sees injustice in the way resources are distributed. She said she’d only give New York a C+ when it comes to equity and public space.

These days, she pointed out, the city expects each park to raise its own funding for upkeep and programming — a situation that leaves green space in low-income neighborhoods at a crippling disadvantage. “In poor communities,” she said, “parks are considered to be an amenity, and maintenance is an add-on.”

Her current approach to building social equity in disadvantaged neighborhoods is to explore a new model of real estate development.

“There are really only two kinds of real estate development that we see in poor communities,” she said. “There’s the kind that assumes that the place is going to be gentrified. Or the kind that just assumes that that kind of poverty is going to remain in that area.” The first, she says, leads to displacement of people already living in a neighborhood. The second results in the kind of businesses that suck money out of the community without building it up — liquor stores, pawnshops, check-cashing places.

The result, she says, is that the strivers and achievers of a community such as her own in the South Bronx, where the second model is in evidence, often leave as soon as they can.

Carter is aiming at another type of development, targeting underutilized pieces of real estate and using them to attract the types of businesses and residential development that would appeal to those who might consider leaving a neighborhood once they start doing better for themselves. She also is working on building up local jobs in growing industries such as tech and food production.

“We want to raise the bar for what passes for redevelopment for poor communities,” she said.

Public space is a big part of that vision. Carter showed pictures of an abandoned Bronx railway station, designed by the great architect Cass Gilbert and now fallen into disrepair, that her group has been working on. Ultimately, she and her colleagues plan to convert it into a business hub that would include services residents now have to travel elsewhere to get, such as a spa. In the meantime, they paid local youth to clean it up and paint it with a lively design, making the block feel more inhabited and, as a result, safer.

“You build out your public spaces in a way that forces good behavior,” Carter said. “That’s what good public space does.”

For both Carter and Peñalosa, the ability for all citizens, regardless of income, to move about the city and enjoy its streets and parks is central to a healthy city and a functional society.

“In every detail a city should reflect that human beings are sacred and that they are equal,” said Peñalosa.

Carter put it this way: “Everyone has the right to be happy and safe everywhere. That’s not too much to ask, is it?”

Watch a full-length video of the talk here.

This post is sponsored by Friends of the High Line.