Looking Ahead After Sandy, Bloomberg Talks Waterfronts, Infrastructure and Climate Change – Next City 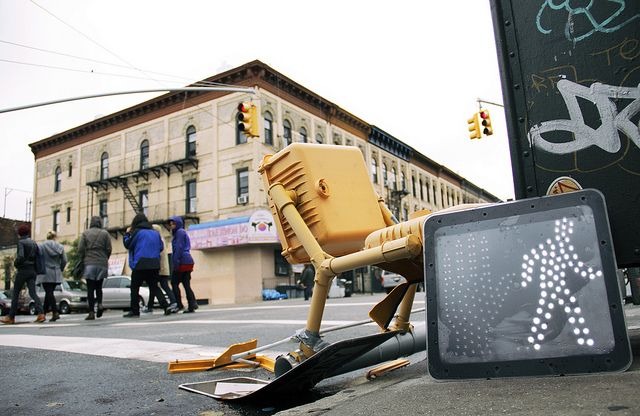 Bushwick, Brooklyn in the aftermath of Hurricane Sandy. Credit: Michael Tapp on Flickr

The water damage is still visible on some walls of the New York Marriott Downtown, marking how high the storm surge reached when it flooded the building’s first floor. Yet on Thursday, with Hurricane Sandy not even six weeks behind it, the hotel was operating at full tilt, hosting an invite-only mayoral breakfast around what comes next for the storm-battered city.

To a room filled with utilities executives, NGO leaders and press, Mayor Michael Bloomberg detailed his far-reaching plans to ready New York for its next big weather event. But he also devoted at least half of his speech to climate change — a remarkable amount of time to reserve for the larger, longer-term problem even as the city is still digging out from the initial disaster.

After a surprise introduction by former Vice President Al Gore, Bloomberg rattled off a bucket list of storm-inspired intentions. With less than a year left on his decade-long run at City Hall, the mayor called for an action plan that’s essentially threefold, involving immediate, short-term and long-term changes.

On the immediate front, Bloomberg announced that he had appointed Seth Pinsky, head of New York’s Economic Development Corporation, to direct recovery efforts and create a climate change battle plan for the city. Mark Ricks, an infrastructure expert at Goldman Sachs, will take a leave of absence to back Pinsky up.

Looking further down the road, Bloomberg detailed sweeping strategies for fortifying the city against future storms. They ranged from granular policy tweaks, like modifying building height limits so coastal dwellings can be elevated above the surge line, to massive investments in new infrastructure, like $2.4 billion to capture storm water using porous asphalt and rooftop vegetation.

Most notably, the mayor — whose housing legacy is synonymous with waterfront development — stressed that New York would not shrink from ongoing efforts to reclaim its waterways. Generously declaring the city’s 520 miles of shoreline to be “some of the most beautiful in the world,” he said, “We are not going to abandon the waterfront… but we can’t just rebuild what was there and hope for the best.”

A declaration of support for “the waterfront” is a complex one in New York. After Hurricane Sandy left downtown Manhattan dark and uptown virtually untouched, many noted that there had become two New Yorks. But you could just as easily say that there are also two waterfronts: One where new luxury towers now rise along the water’s edge in parts of Brooklyn and Queens, and the one that bore the brunt of Sandy’s wrath. The latter comprises neighborhoods like Coney Island, Red Hook and the Rockaways, which have always been poor and rely heavily on city support even when the sun is shining.

In the storm’s aftermath, that divide was thrown into relief as residents of these neighborhoods charged that the city was pouring resources into moneyed areas while poorer ones remained wrecked and powerless. And they were at least partly correct. On Monday, the New York Times ran a scathing report detailing the city’s failure to protect its public housing residents during and after the storm. In his speech on Thursday, Bloomberg spoke directly to this, explaining that the city was taking responsibility for sending carpenters, plumbers and electricians to the affected areas, all paid for by FEMA. But most of his proposals were aimed at the city at large, and the mayor seemed fairly upbeat about the opportunity to put his new waterfront plans into action.

New York has been employing smarter waterfront development tactics for years now. For instance, during Sandy the new Brooklyn Bridge Park, designed to absorb floods without sustaining damage, did just that. Bloomberg talked up plans to build on this legacy by expanding the Staten Island Bluebelt, and perhaps building dunes and jetties in places to mitigate future storm surges. But he dismissed the idea of a seawall — a proposal that has tickled the local media’s fancy — and acknowledged that, despite its best efforts, the city would flood again, and that it needed strategies to cope with that.

Those strategies involve everything from moving critical electrical infrastructure out of the 100-year flood zone to incentivizing large buildings to invest in emergency generators. Bloomberg noted that Sandy took out 95 percent of Verizon’s copper-wiring network in Lower Manhattan, and emphasized the need to shift reliance toward fiber-optic cables. Some of the flaws in the current system were glaring: Sandy knocked out cell phone service, for instance, in part because the transmission towers have only eight hours of backup power.

But what stood out most during the speech was its long view, which dwelled on climate change solutions aimed at keeping New York a viable place to live not just for decades, but centuries. “Cities are not waiting for the national government to act on climate change,” Bloomberg said, citing the C40 Cities group, an organization of cities collaborating on global warming mitigation strategies.

He ticked off the efforts already bearing fruit around New York: The CoolRoofs initiative, under which “northward of 80 percent of the city’s roofs” had been painted white (thereby reducing the total energy needs of those buildings “by something like a quarter”) and the goal of reducing New York’s carbon emissions by 30 percent by 2030, a benchmark that the city is already more than halfway toward meeting. Gore brought up MillionTreesNYC, which has added upwards of 600,000 trees to the parks and sidewalks, part of a plan to reduce the heat island effect as temperatures rise.

Behind all these efforts, Bloomberg said, is the aim to catalyze similar changes in other places: “As [former mayor] Ed Koch used to say, New York is where the future goes to audition.” And Bloomberg suggested that Hurricane Sandy could be the trigger event that leads to those changes, the way the Great Fire of 1835 spurred the creation of the city’s municipal water system.

New York has a vested interest in working to make such changes catch on, because despite the mayor’s insistence otherwise, it’s clear that “hoping for the best” will be part of the city’s hotter, wetter future. New York will revise its flood codes, yes, and FEMA will recalibrate its 100-year flood maps, which were last updated in 1983 and predicted only one-third of the flooding that occurred.

But New York remains a very watery place, with four of its five boroughs technically islands, and its position at the crux of two landmasses (Long Island and the mainland) make it a perfect storm-surge receptacle. As “100-year storms” begin arriving as often as every three years, the city will have to continually reimagine itself in ways that are impossible to predict.