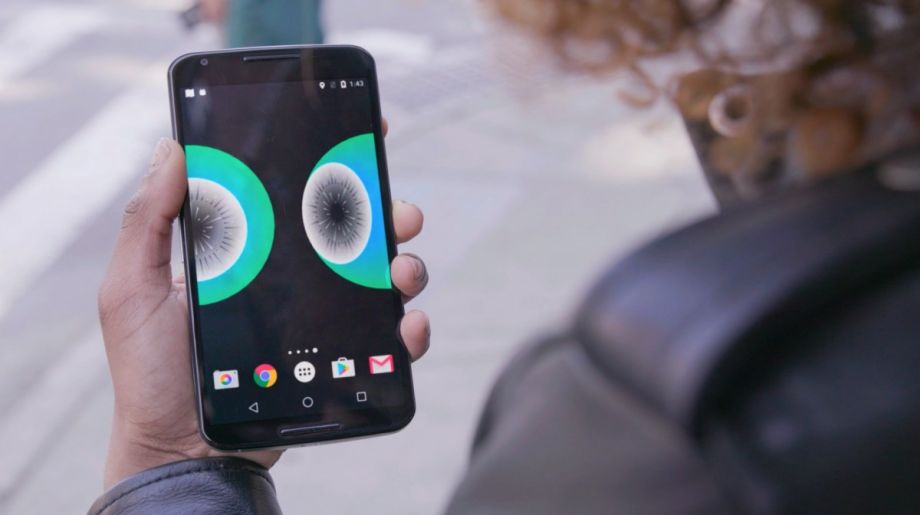 Ekene Ijeoma's Look Up app can alert a pedestrian looking at a smartphone to an intersection.

Ekene Ijeoma loves to people watch. The Brooklyn-based artist and designer often stakes out a street corner and eats lunch and takes in the sights of his city. One afternoon he was doing just that and saw a friend crossing the street. As is often the case, she was staring at her phone and managed to wander into a side street instead of walking to the opposite sidewalk.

“As she was crossing, a car was coming towards her and they just stopped right in front of each other,” says Ijeoma. “It made me think about what would’ve happened if she was looking up. Of course she would’ve seen the car, but she also would’ve seen me.”

He kept thinking about the incident as he read stories about a proposed distracted walking law in New Jersey and a German city that installed flashing lights in the sidewalk to keep people from walking into oncoming trams.

Ijeoma decided to make an Android app called Look Up. He says, “If people are looking at their phones all the time, that’s where we have to create the intervention.”

Look Up is a Live Wallpaper app, which allows it to constantly run in the background without affecting other apps. It incorporates New York City intersection data and geo-sensing. When users reach an intersection, a pair of graphic eyeballs pops up on the screen and the phone vibrates, imploring them to pay attention to their surroundings. Users can decide if they want to be alerted at every intersection, every third intersection or randomly.

Look Up has obvious applications for encouraging people to pay attention to the potential dangers of speeding cars, but Ijeoma has loftier ideals for what it could do.

“It just prompts you to look up. Whatever happens when you do is up to where you are and who’s around you. The idea is that hopefully by looking up we can start to see, acknowledge and value one another in real life,” Ijeoma says.

Part of that ideal comes from his vision of Look Up as an art project to raise awareness about street distraction.

“For a while I didn’t want to call it an app. I called it a participatory art project. It’s multisite-specific. You have to be walking and moving around the city to experience it. It doesn’t have the same expectations as an app.”

Kate Kraft, executive director of the national pedestrian advocacy organization America Walks, says she supports any piece of technology that can improve safety for walkers, bikers or drivers. “Distracted anything — distracted driving, distracted pedestrians — is really not good for safety. I would highly support anything to stop distraction.”

But she says that comes with the major caveat that the conversation about distracted walking can lead to misplaced blame in an environment designed first and foremost for cars.

Ijeoma’s Look Up is moving out of beta testing and will be available for public download July 11.