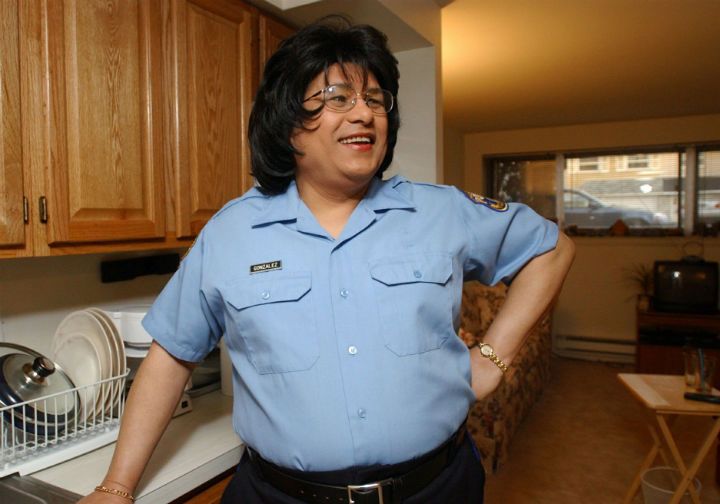 Despite hiring its first transgender cop in 2004, the Philadelphia Police Department has had a fraught relationship with the city’s transgender community. Credit: AP Photo/Rich Jessica Griffin

After two years of work, the Philadelphia Police Department in December rolled out new standards for how its officers should treat transgender individuals — a first-of-its-kind directive for a city that’s no stranger to reports of police maltreatment.

Implemented last month, the new guidelines are the latest in a growing but slow-moving trend in U.S. cities, says Jennifer Orthwein, a pro bono attorney for the Transgender Law Center in California. Since 2012, law enforcement agencies in New York City, Chicago, Boston, Denver, Houston, Los Angeles and Albany, N.Y. — the kind of cities where larger transgender populations and more advocacy groups tend to exist — have all issued similar procedures in an effort to ensure fair and equal treatment of transgender people interacting with police. Orthwein points to regulations in the federal Prison Rape Elimination Act, released in 2012, as prompting the wave.

Much like local non-discrimination ordinances, Orthwein says, establishing these kinds of protocols are necessary if cities want to reduce the much higher rates of assault at the hands of law enforcement experienced by transgender people. It’s an issue particularly important to transgender and LGBT groups, she says, “because transgender individuals fear the police.”

“Often times when they’re victimized, [transgender people] won’t turn to the police because of fear of being treated as though they’re the perpetrator and not the victim,” Orthwein says.

Lt. John Stanford, a Philadelphia Police Department spokesperson, said there was a palpable need to create a policy specific to the transgender community “to educate our officers, teach them the things they need to know, and to be respectful.” The 10-page directive was nearly two years in the making, with PPD Deputy Commissioner Kevin Bethel working closely with local LGBT groups and community members to the address issues faced by the transgender community when dealing with police.

Per the directive, which Next City obtained, Philadelphia police officers should use preferred pronouns and names when addressing transgender individuals or releasing information to the media on a transgender suspect, victim or witness. Officers are also expressively prohibited from treating transgender individuals inappropriately, using humiliating or offensive language, disclosing a person’s gender identity or sexual orientation to others without warrant, performing stop-and-frisks to determine a person’s gender or gender identity, or assuming a person has committed a crime because of gender identity.

Additionally, officers whose gender is consistent with the detainee’s physical anatomy — not gender identity — will search transgender individuals, who can request a supervisor aligning with their gender identity or expression to observe the search. Transgender arrestees will also be transported alone, but can request the presence of an officer of their gender identity, and will be housed in single-occupancy cells unless a medical condition or mass arrest requires holding at the Police Detention Unit.

Of course the PPD directive isn’t perfect, though Orthwein calls it a “very, very good” start for the city. Like many policies, she notes, the demonstrable success of these guidelines will hinge on effective training and ongoing awareness, and whether that training is transparent and accessible. (Stanford says supervisors are responsible for guaranteeing officers read and review the policy and training bulletin released to all districts and units. Sensitive training is already implemented in the department.)

“What we’re seeing in Philly is they’re trying different means to keep trans individuals safe, and we’re going to see how this works down the line,” Orthwein says. “We’ll see as time progresses, and as these policies reach the rest of the trans community, if they’re being implemented properly.”

While PPD hasn’t said what prompted the creation of these guidelines, Equality PA Executive Director Ted Martin said it’s possible that public pressure and outcry may have been a factor. Cases like that of Diamond Williams, Erika Keels, Stacy Blahnik Lee and Kyra Cordova — four transgender women who were murdered in 2013, 2007 and 2012, respectively — are distressing examples for many advocates of how Philadelphia police conduct incompetent investigations when a transgender victim is involved.

No one case is more illustrative than the still-unsolved 2002 homicide of Nizah Morris. That December, Morris, a 47-year-old transgender woman of color, was found lying on a Center City street with a what proved to be a fatal head wound within minutes of receiving a courtesy ride from police. The investigation that followed has been shrouded in controversy, with many residents — including Morris’ family and the city’s LGBT community — calling it botched from the start. Details of what happened that night remain a mystery a dozen years later.

In reviewing the case once more, the Police Advisory Commission, Philadelphia’s external review agency which in 2007 cleared the officers involved of any wrongdoing, released an opinion in March 2013 calling for state and federal probes into the Morris homicide. “It is apparent from our review that the progress of investigations to date in this matter has been seriously impaired by both bureaucratic and defensive attitudes of many concerned,” the commission stated. This new opinion has renewed calls for transparency into the case, Philadelphia Gay News reported last year.

Morris’ murder and the subsequent investigation sent a deep ripple of fear through Philadelphia’s transgender community that still reverberates today. In order for PPD to repair the damage done, Martin says, the department needs to both recognize and address that fear “again and again,” moving forward “because it’s always going to be there.”

“For a community that, unfortunately, is on the receiving end of an inordinate amount of violence,” Martin says, “there has to be understanding from those protecting the community that those conversations will make it better.”

To this end, Martin believes local police departments across the country also need to regularly interact with the transgender community in order to ensure effective policy implementation. Law enforcement should frequently and proactively, he says, reach out to transgender residents and advocacy groups in an effort to build relationships, incite dialogue and build trust.

For most cities, though, that last point will take some time.