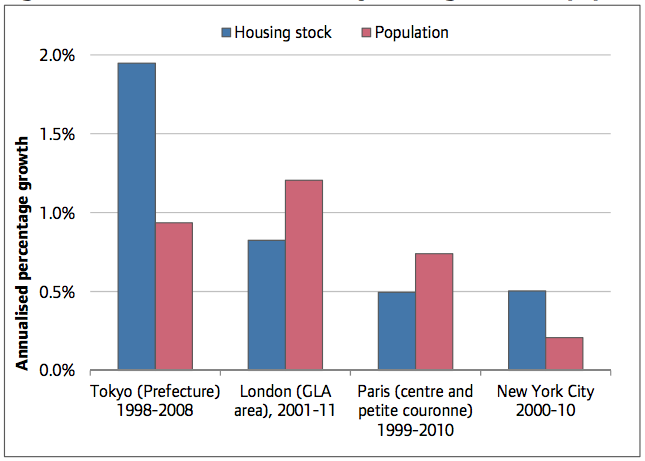 When New Yorkers imagine real estate development in their city, they tend to imagine voracious builders – they think about the crop of towers rising in downtown Brooklyn, in Williamsburg and around the High Line, the construction sites that litter the far west side and Hudson Yards, and the Billionaire’s Row of supertall skyscrapers massing south of Central Park on 57th Street, and they imagine a city overcome by developers.

The narrative of New York as captive to builders overrunning any rational bounds to growth is a popular one, but the statistics – annual housing production numbers so meager that they’d surprise even Amanda Burden, New York’s chief city planner – tell a different story.

According to numbers compiled by James Gleeson for a paper released by Greater London Mayor Boris Johnson’s office on the need to build more housing, New York’s housing production lags far behind its main “world city” competitors, London and Tokyo. In fact, despite New York’s skycraping reputation – it has more high-rises, however you count, than relatively squat Tokyo and London – it actually has more in common with Paris, a city with a reputation for being frozen in its 19th century urban form, when it comes to current growth.

Gleeson found that Tokyo grew the most during the first decade of the 21st century, with its overall number of houses and apartments rising by 1.95 percent each year. London took second place, growing its housing stock by 0.82 percent each year. Paris and New York, meanwhile, lagged behind, both growing their number of homes by just 0.5 percent per year – not enough in either case to keep up with national population growth.

That disparity is on the path to growing even larger in coming years. In London, Mayor Johnson wants to build 42,000 new homes per annum over the next decade, an average rate that would surpass New York’s yearly housing production right before the crash by nearly 10,000 units. (And that was with pro-density Michael Bloomberg in New York’s City Hall.)

Gleeson’s analysis used data from a 10-year period around 2000 to 2010 (due to limited data, the ten-year windows varied by a few years, with Tokyo’s starting in 1998, London’s in 2001, New York’s in 2000 and Paris’s an 11-year window from 1999 to 2010). He also examined areas of similar scale within the four metropolises – New York’s five boroughs and Greater London both have 8.2 million people, Paris and its three inner departments have 6.7 million, and the prefecture-city of Tokyo has 12.7 million inhabitants.

He found that the population of Tokyo grew by 0.94 percent per year, much lower than its 2 percent increase in homes, but still a respectable rate given that Japan is actually shrinking. The fact that housing growth outpaced population growth suggests that Japanese apartments and houses are becoming less crowded, and also that price pressures might let up as people have more options to choose from.

Population growth in London and Paris, meanwhile, outpaced housing stock growth, suggesting that homes were getting more crowded – and indeed the Greater London Authority found that “for the first time in over 100 years, the average household size in London has increased, from 2.35 to 2.47 persons between 2001 and 2011.”

New York’s extremely low population growth is on its face puzzling – it saw a gain of just 0.21 percent from 2000 to 2010, lower than even its limited housing stock growth. This seems to contradict the basic laws of economics, though, as prices have been steadily rising as the city has become safer and more desirable. Until, that is, you remember how contested 2010 Census was for New York City. City officials claimed that the actual population was at least 8.3 million, not the 8.175 million that the Census Bureau counted. Vacancies supposedly soared in southern Brooklyn and northwestern Queens, areas of the city that have seen huge influxes of immigrants, many without papers and others living in illegal housing units. City officials claimed there were at least 50,000 residents in Brooklyn and Queens whose homes were mistakenly marked as vacant alone. (In 2005, the city eventually persuaded the Census Bureau to boost its population count by 160,000, though no such correction was forthcoming for the 2010 count.)

In any case, the numbers – really quite a basic comparison, but one that’s rarely made made – suggest that New York has possibly an even bigger housing supply/demand mismatch than London, whose mayor seems committed to boosting production. Boris Johnson wants to build 42,000 new homes a year over the next decade, an average rate that would surpass New York’s yearly housing production right before the crash by nearly 10,000 units.

Mayors of New York often do set goals for the production of new subsidized housing units. Bloomberg wanted – and has nearly achieved in 12 years – 165,000 “affordable” units to be preserved or built, whereas Mayor-Elect Bill de Blasio set a goal of 200,000 over two terms, or either years in total.

But New York mayors and chief city planners never set goals for total housing supply increase. This isn’t a problem if, like many voters, you believe New York City’s housing market is fundamentally irrational and increases in supply will not do anything to lower prices. But if you believe that the fundamental laws of supply and demand apply to urban housing – and all indications are that Bloomberg and de Blasio do – the lack of overall building targets should be a worrying sign.