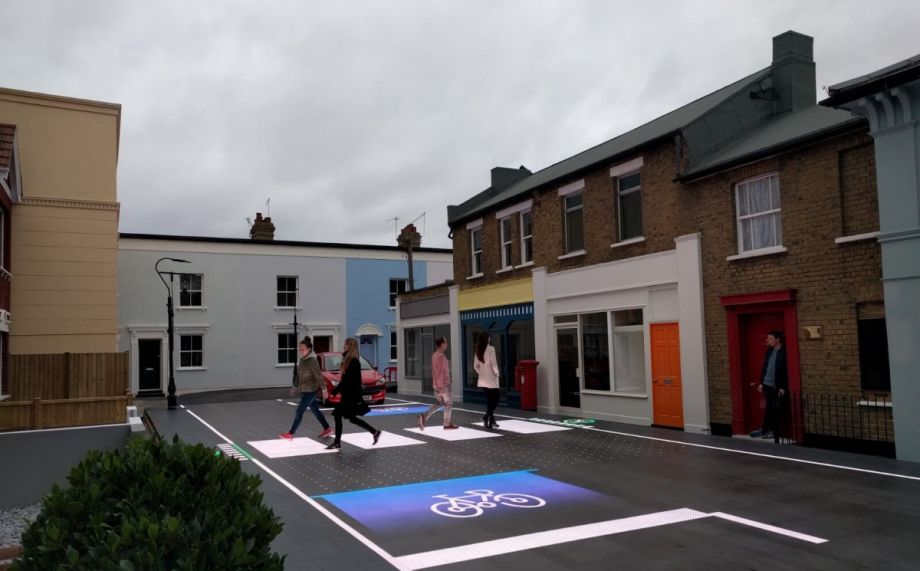 Smart city technology has the potential to transform stoplights, streetcar lines, bike routes, bus rides and just about every other corner of urban life (while raising lots of privacy questions and dystopian big data concerns). The newest addition to the sensor-laden infrastructure family: the humble crosswalk.

A new digital crosswalk that responds to pedestrian movements is being developed by Architectural firm Umbrellium in collaboration with insurance firm Direct Line, Wired UK reports. It’s design is aimed at curbing the roughly 7,000 harmful incidents that occur in UK crossing each year (according to figures from the Transport Research Laboratory). And it utilizes machine learning to make the design safer over time.

According to Wired UK, the LED patterns that make up the crossing don’t actually appear until its safe for pedestrians to cross. The crosswalk is built into 22 meters of responsive surface which would be embedded under a normal road — at the top, the LEDs would be covered in high-impact plastic to support vehicles and stay water-tight.

When the LED lights do appear, they’re arranged into well-known patterns, including the white zebra crossing and pedestrian and cyclist symbols. Two cameras monitor the intersection, and the design utilizes machine learning to classify all the objects, including pedestrians, cars and cyclists.

“This helps the system figure out how best to react by tracking movement and assuming their trajectory,” Wired UK reports. “It will also learn the safest point in the road to cross to decide where the crossing should appear.”

The project is being tested on a fake street at a London film studio, according to The Independent, but is still reportedly a long way from being implemented on a real street. To speed things up, the code behind it is going to be made open source.

The crosswalk, like so many other smart infrastructure designs, could have positive implications for pedestrian safety. But as Next City has covered, better infrastructure isn’t everything. Collisions involving pedestrians occur less frequently at marked — rather than unmarked— crossings, but lines and symbols aren’t necessarily fail-safes for deeply biased drivers. For example, researchers from Portland State University’s Transportation Research and Education Center (TREC) in 2014 found that drivers yielded at different rates depending on gender and race. On average, black men had slightly more cars pass before a driver yielded, while black women had slightly fewer cars pass before stopping on average than white men and women.