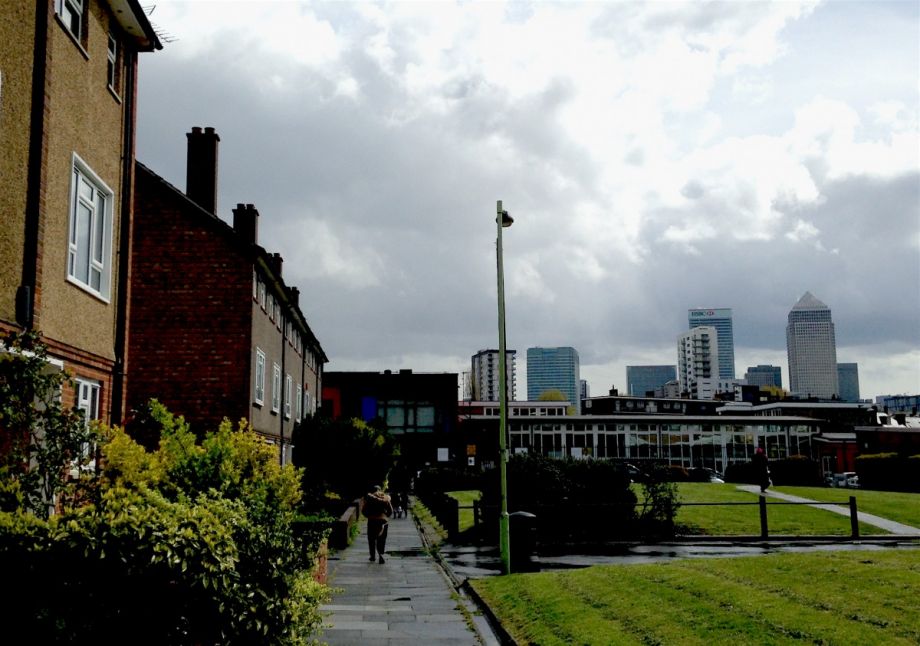 Teviot Tales is different from all of the above. It’s a very basic storytelling game using the open-source software Twine, and part of a series of urban art projects co-sponsored by the Social Housing Arts Network. The network aims to connect U.K. social housing residents to artistic opportunities.

The game’s creator, Hannah Nicklin, aimed for simplicity. Residents of the Teviot housing estate, in East London, were new to Twine; many had only a passing familiarity with computing. As part of a six-month artist’s residency on the housing complex, Nicklin facilitated IT, storytelling and English sessions. The stories that residents agreed to make public formed the basis of Teviot Tales.

The game can be thought of as a clickable story, with blue navigation options mirroring the hyperlinks of a webpage. The game evokes its very local setting through both simple illustrations and text, such as:

Washing drying on the balcony. Radio floating up into the air. Old bikes locked to the railings. The smell of turmeric and chilli, pesto and sausages, pork and sauce. Lit by different lights. Filled with different lives. Held together, by brickwork and circumstance.

Making your way through the game is akin to the experience of moving through urban space, as well as through relationships. You can choose to turn along the motorway or the canal. You can decide whether to speak to a person sitting on a bench or to continue on your way. You can seek to hear more of a person’s story, or decide that you’ve had enough.

Of course, the paradox is that a digital interface is being used to foster interpersonal connections. But in a city of millions or a housing complex of thousands, where it’s not possible to connect with every neighbor, storytelling games like Teviot Tales may offer an interpersonal shortcut. Nicklin calls these “a way of exercising our empathy muscles,” both through the experience of playing and through the experience of designing.

One person who can attest to this is Kathy Mcleod, who participated in the Twine trainings and has been turned into a Teviot Tales character. Not many neighbors knew about Mcleod’s passion in life: her 10 cats, which she enters in cat shows.

In the game, Mcleod’s character describes participating in these cat shows, and provides details of her day-to-day life with her husband and two 20-something daughters. Not only did Mcleod surprise others with the extent of her cat fancying; she learned about her neighbors in turn.

Using an interactive game for storytelling was useful to Mcleod because her dyslexia can make writing challenging. She plans to continue developing her own Twine game — devoted, unsurprisingly, to cats.

A character from Teviot Tales

Mcleod has lived in Teviot Estate her entire life, and has witnessed many changes during this time. The borough is one of the poorest areas of the U.K., as well as one of the most ethnically diverse. In particular, there’s a sizeable Bangladeshi population in the borough and on the estate.

The area has been heavily redeveloped during Mcleod’s life. For several decades now, she and the other Teviot residents have had a prime view of the skyscrapers in the financial district Canary Wharf — a very visible testament to the socioeconomic inequality of East London.

“This is not a place for people who have easy lives,” says Nicklin. This is evident in stories like that of Azyadi (surname not given), who fled Somalia during the civil war in the 1990s. Teviot Tales recounts her journey from Somalia to Kenya, and her life in a Dutch refugee camp, where she and her husband had two children. Two days after she arrived in the U.K. and was reunited with her sisters there, Azyadi’s husband died. He’d used the last of their money not on medical care, but to get his family to their new home.

Mcleod considers herself lucky to live in Teviot Estate. The large-scale transfer of public housing from local authorities to independent housing associations over the years in the U.K. has translated into disparity in the way these properties are managed. Some housing associations — like Poplar HARCA, the co-sponsor of the Teviot Tales project — provide amenities such as community centers and fitness classes, schedule drop-in sessions where residents can report concerns to housing managers, and have dedicated community projects and partnership officers. Some associations have charitable status and specifically focus on urban regeneration. Others are less responsive to residents.

Mcleod sees arts projects like Teviot Tales as a chance to gain concrete IT and communication skills. She also points to how participation led to greater self-confidence, as well as access to opportunities that people like her, in a high-poverty area, wouldn’t encounter otherwise. And she cites the strengthening of community bonds.

Nicklin knows the game isn’t perfect. Funding didn’t cover translation into languages other than English. And ultimately she hopes that her role will be redundant, with people like the Teviot residents having the tools, the desire and the space to tell their own stories.

Whatever form such projects take in the future, Nicklin sees storytelling as an essential vehicle for understanding fellow city-dwellers. As she says, “We need new practices as urban citizens to keep ourselves human and humane to each other.”