Measuring the Bright Lights of a Big City – Next City

Measuring the Bright Lights of a Big City 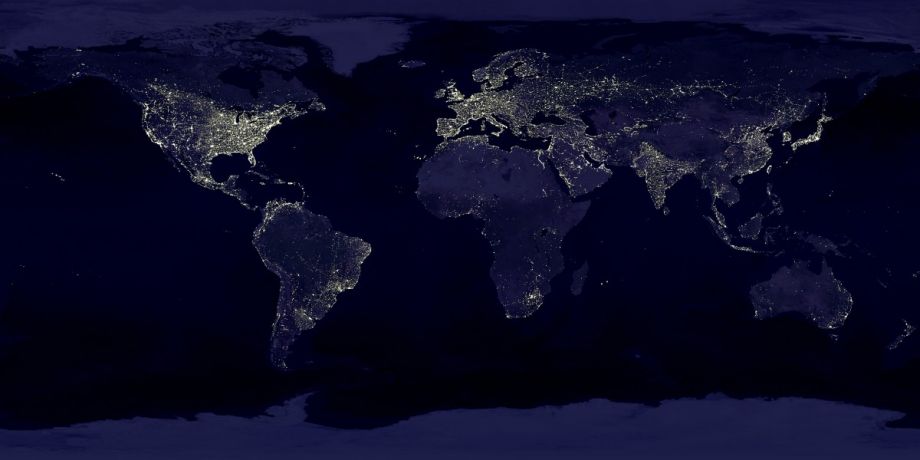 At one time, the small coastal city of Encinitas, California was relatively pastoral. “I had the best stargazing in my backyard,” recalls Karen Jacquet, a community activist. But the past decade has brought substantial development, including a large park with multiple sports fields scheduled to open this year. Security lights have already been installed, and some community members fear that stadium lights will follow. Jacquet says such lights would raise “a whole gamut of issues”: possible harm to nearby wetlands and local birds, as well as sleep disturbance and the further disappearance of stars.

Jacquet is a member of SOS (Save Our Skies) Encinitas, an advocacy group dedicated to protesting light pollution. With the help of Jean-Bernard Minster, a professor of geophysics at UC San Diego, group members are monitoring current light pollution outside their homes, using a new iPhone app called Dark Sky Meter. If more lights go up, they will be armed with data about the impact on their neighborhoods.

This grassroots effort is one example of an emerging movement of citizen scientists who are taking on light pollution. In the past few years, thousands of urban astronomers have submitted observations to a program called Globe at Night, which maps data from around the world. In 2013, Dark Sky Meter and Loss of the Night, an Android app that measures light pollution, were released. Another new initiative called Cities at Night enlists people to sift through photographs taken from the International Space Station, with the intention of identifying cities and comparing levels of light pollution. For all of these projects, the idea is to both raise public awareness and to furnish information that might prove useful to scientists. In some cases, as in Encinitas, communities might try to use the data to lobby for or against specific proposals.

Not all artificial light counts as pollution; no one is suggesting that we go back to lanterns and candles. The unwanted kind is excessive or misdirected, such as streetlamps scattering light upward, creating the poetically named but much-reviled effect known as “sky glow.”

Though rather beautiful from space (see the gallery of NASA images below), light pollution is insidiously harmful in our cities: According to research, it confuses nocturnal species, jeopardizes migratory birds and even disrupts the growth patterns of trees. Its effects on human health range from the intuitive (sleep disorders) to the surprising (there is evidence of links to breast cancer). This is to say nothing of the money and electricity wasted by gratuitous light. As one website laments, “Hundreds of millions of barrels of oil … and hundreds of millions of tons of coal … just so people can light the bottoms of clouds?”

The Globe at Night campaign, run by the National Optical Astronomy Observatory in Tucson, launched in 2006. To submit an observation online, you can consult seven charts of the night sky and indicate which version the sky you see most closely resembles. You can also use a Sky Quality Meter, a device that costs between $100 and $200. Now, the two new apps offer alternative methods. So far, the campaign has collected about 115,000 measurements from dozens of cities — big contributors include New Delhi, Toronto, Berlin and Ostrava in the Czech Republic.

And the data seem to be robust. Last year, Christopher Kyba, a Canadian physicist currently at the Institute for Space Sciences in Berlin, and his colleagues published a paper titled, “Citizen Science Provides Valuable Data for Monitoring Global Night Sky Luminance.” They compared the Globe at Night results to measurements from more conventional sources, and concluded that the amateur-generated data “could be used to track lighting changes worldwide.”

Kyba was initially skeptical of citizen science, but he says, “I ended up becoming a complete convert.” He explains that a large quantity of data can, essentially, compensate for poor quality. “What you see in lots of citizen science projects is the individual observations may not be very accurate. But when you have 15,000 observations, when you do some averaging, you tend to get very powerful results.” And the DIY model offers one major advantage over the light meters that have historically been the method of choice: It’s cheap, and anyone with a smartphone or an Internet connection can do it.

To facilitate this kind of engagement, Kyba developed the Loss of the Night app, which asks users a series of questions about the visibility of stars, starting with the brightest and then moving on to fainter ones. For example, on a recent night in Berlin, the app asked Kyba whether he could see a star called Vega, followed by Altair, then Shedir, and so on. Users also enter information about weather and lunar conditions. (A version for the iPhone will be coming out soon.)

Dark Sky Meter, the app used in Encinitas, works differently: It simply takes a photo of the sky glow, and automatically calculates the position of the moon and of the user. Data from Loss of the Night may vary depending on the eyesight and stargazing experience of users; Dark Sky Meter may be, in the pithy words of its designer, Norbert Schmidt, “more idiot-proof.”

Of course, cities are in a sense defined by light and unthinkable without it. But advocates say that we could do a lot to cut down on excess light: ensure that street lamps are directed downward, use light shields and motion sensors. Indeed, some cities are more plagued by light pollution than others. Madrid, for example, is much brighter than Berlin.

Advocates hope that as citizen scientists become more aware of the problem, they will lobby their representatives on the issue, much as SOS Encinitas has done. According to Constance Walker, director of Globe at Night, starry skies have always been an important inspiration to humans. “It was our TV,” she said. “The more we lose that contact the more we’ll be looking in front of us and not to what’s beyond us.” She urges urbanites to claim what many have never realized they had: “your basic right to see a starry night sky.”

Gallery: Cities From Space at Night