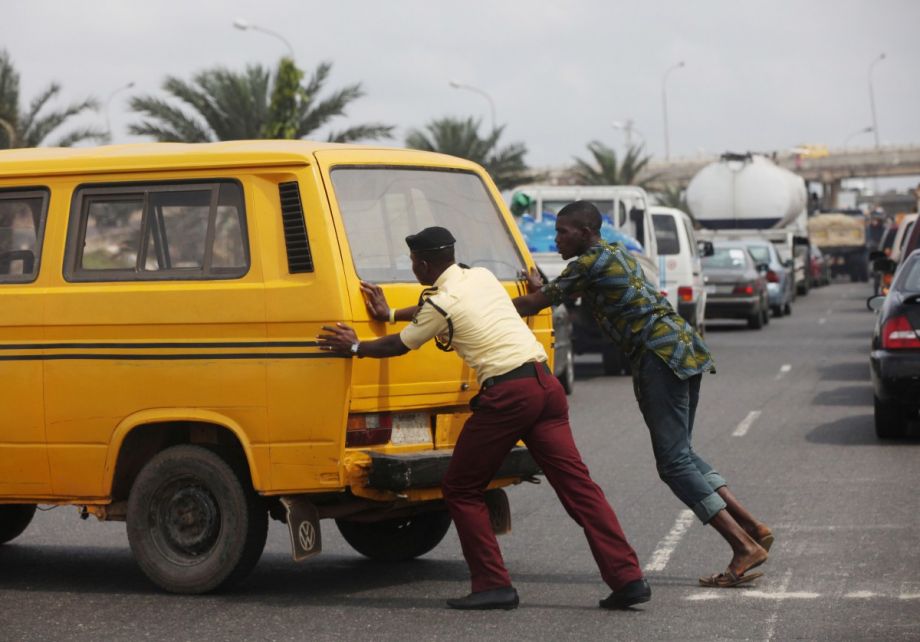 Nigerians will soon have more options for transportation around the country, forecasted to surpass the United States as the world's third most populous by 2050. (AP Photo/Sunday Alamba)

Nigeria moved its national capital from Lagos to Abuja, a new city begun in the 1980s and located near the country’s center, almost three decades ago. Its rapid growth since then — its metro population of nearly six million is second only to that of Lagos in the country — has outstripped the ability of its infrastructure to move people through the city. On July 12, Nigerian government officials celebrated the opening of a key move to fix that problem: the Abuja Light Rail metro system, whose first two lines entered service that day.

The International Railway Journal reports that the initial segment of the system consists of two lines and 12 stations totaling 45.2 km (28.1 miles) in length. The two initial lines connect the city center of Abuja with its airport, currently the principal means of access to the city from the coastal metropolises including Lagos, and with the national rail system — which is also building a line connecting Lagos with Abuja via the historic university city of Ibadan, now Nigeria’s third-largest metropolis.

China’s Xinhua news agency also ran a major report on the opening, which was appropriate, as the Chinese government is both building the entire 290-km (180.2-mile) light metro system in six phases and covering 60 percent of the $824 million construction cost through loans from the Export-Import Bank of China.

“Our commitment to the vision for a modern, integrated rail system for Nigeria is total,” Nigerian President Muhammadu Buhari said, according to the report from International Railway Journal. “The second phase of the Abuja light rail will connect more parts of the city, while our standard-gauge national railway is also taking shape, with the Lagos-Ibadan leg currently under construction. A modern rail service will greatly boost the Federal Capital Territory economy and enhance social life.”

Metro Report International reports that Florence, Italy, opened a 4.1-kilometer (2.5-mile) extension of its initial tram line on July 16. The segment, which was referred to as line T3 while it was under construction, is being operated as part of initial line T1.

The extension runs north from line T1’s original eastern terminus at Alamanni-Stazione to Careggi-Ospedale. Seven new trams from Hitachi Italy will augment the 17 currently in service.

A second line, T2, is slated to open in October. It will connect the city center with the airport to its northwest via a high-speed rail station currently under construction.

The future of non-electrified rail transport is ready for its closeup in the German state of Lower Saxony. That’s where the world’s first hydrogen fuel cell-powered trains will operate now that the German government has given them the go-ahead, according to a report in Global Railway Review.

The Coradia iLint passenger train, developed by Alstom at facilities in both Germany and France, is notable for its quiet operation and eco-friendly propulsion system. Hydrogen fuel cells power electric generators whose output is stored in batteries. The exhaust consists only of steam and condensed water. The train is specifically designed to operate on non-electrified lines.

Alstom signed a contract with the regional transit authority of Lower Saxony to supply 14 of the trains last November. The French rail technology firm will also maintain and supply fuel for the trains for 30 years under the terms of the agreement.

Enak Ferlemann, the German federal government’s authorized delegate for rail transportation, told Global Railway Review, “Hydrogen is a true low-emission and efficient alternative to diesel. Especially on secondary lines, where overhead lines are not yet available, these trains are a clean and environmentally friendly option. That is why we support and promote the technology, in order to bring it to the surface.”