Life After Bike-Share – Next City 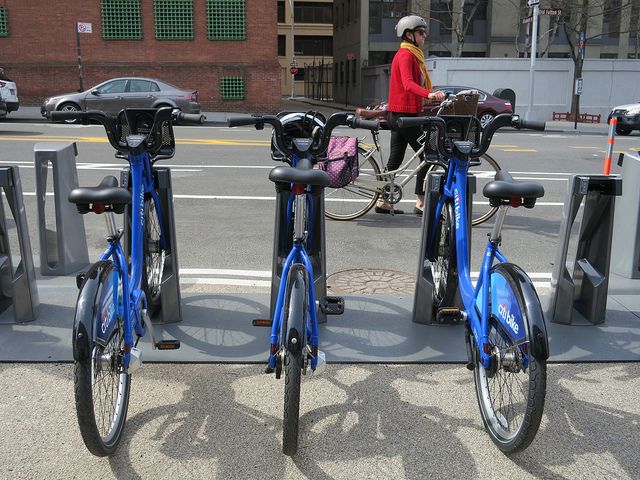 As the breathless coverage and minor arguments begin to subside, we can reflect a little bit on the real significance of launching bike share in New York City. After all, this should be a watershed moment for urban transportation. It represents new modes and initiatives contending with the entrenched structure of the nation’s biggest, meanest city. It’s a sign of things to come.

But why does it feel like the end of something rather than the beginning?

First of all, Citi Bike arrives in the waning months of Mayor Michael Bloomberg’s tenure. The bike share program is a capstone project that wraps up many years of dedicated work to improve bicycle infrastructure, which has mostly manifested itself in Manhattan and parts of northern Brooklyn. Citi Bike is neatly emblematic of the initiatives that define the Bloomberg administration. It’s being done in partnership with the financial sector, it’s popular among the city’s more affluent residents, and its goals are to encourage a healthier and less car-dependent city. Bloomberg is also admired for his ability to get things done, and frequently criticized for insensitivity to less affluent communities. In this case, Bloomberg rolled out an impressive, politically challenging project, but will leave office before having to implement the program in less affluent communities not part of the launch.

And with that, Citi Bikes also marks the end of the usual arguments for bike advocacy. It’s the culmination of a major push from the communities that are best-positioned to make use of bikes. The most vocal supporters of urban biking have secured infrastructural improvements in the neighborhoods where they make the most immediate sense. From now on, however, the initiatives for further action will have to come from neighborhoods that are less ideally situated, and from residents who are not so taken by the allure of biking.

Bike share is such a politically fraught issue that the Bloomberg administration understandably chose to first implement in the neighborhoods where they have the most backing. And much of the opposition in the poorer outer boroughs can be just as petty and reactive as anywhere else. Still, for a cause whose rhetoric encompasses such populist ideals, and for a movement that draws much of its legitimacy from the supposed benefit to everyone, we must consider how that promise can actually be carried through.

It’s no coincidence that the progress of bike advocacy corresponds with major demographic shifts in centrally located neighborhoods most conducive to biking. For many low-income communities far away from traditional job centers, biking to work is simply not a practical option. In Queens, Staten Island, the Bronx and Brooklyn as a whole, residents endure some of the longest commute times in the country, with the average one-way commutes for the four boroughs clocking in at more than 40 minutes. And that is using motorized transportation. A whopping 75 percent of all New York City residents travel more than an hour each way for work, and of these especially unfortunate commuters, two-thirds earn less than $35,000, while only 6 percent earn more than $75,000 Compare that to the members D.C.’s Capital Bikeshare program, who participated in a recent survey: Only 20 percent reported household incomes of less than $50,000, and 45 percent earn more than $100,000.

Not that it has to be that way. National studies on the bicycling renaissance suggest that low-income Americans ride bikes just as much as any other income group. However, they are more predisposed to ride for utilitarian purposes than for recreational purposes. According to a 2011 review of cycling trends over the past two decades, lower income populations are more likely to view bikes as a tool for getting to work or running necessary errands. The marginal utility of riding a bike is different when one has less time for recreation and fewer destinations to frequent.

In low-income communities, bikes are less a lifestyle choice than a lifestyle necessity. It makes sense: Cycling can influence day-to-day quality of life, but it can’t determine conditions of life. If your commute is on the shorter side, biking is an attractive alternative to riding the few miles out on a train or bus. But if your commute is long, a bike likely won’t make it any shorter and in fact, could introduce new dangers. Inconvenient approaches in the city’s bridge system and notorious access roads like Queens Boulevard present more safety concerns for those who have to travel between boroughs.

This means a fundamental difference between what bikes represent for the outer borough residents and what they represent for those who reside in more affluent central neighborhoods. These differences can’t be so glibly attributed to a lack of cycling education, or to a cultural misunderstanding that will eventually resolve itself.

I’m curiously reminded of Robert Moses, a man roundly vilified by street advocates for giving the city over to the automobile. Despite being known for his monumental highway and bridge system, Moses famously never learned to drive himself. Instead of having to sit through traffic every day to get to work, he was chauffeured through the city in a black limousine.

His biographer Robert Caro speculated that this was the reason for a specific quirk in the way Moses designed his parkways: Moses conceived of driving as a luxurious recreational activity, and he cut inefficient and otherwise unintelligible paths through Long Island in order to prioritize natural beauty and pleasant views. He thought less about the millions of drivers who mostly cared about getting to work on time, with as little expense as possible, rather than the beauty surrounding the clogged highways.

Planners can’t make that mistake again. There must be careful consideration of how socioeconomic conditions affect the utility of bikes, and how we can continue to advocate for bikes when the benefits are more muted and prosaic.

Joan Byron, director of policy at the Pratt Center for Community Development, works extensively with the commuting patterns of select low-income neighborhoods. Byron has found that in many cases, hour-long commutes are a function of the scarceness and unreliability of bus services that further exacerbate the distance. In these cases, cycling could be a pretty good option to help lessen the burden for an inconspicuous portion of a struggling population.

“Many low-income people who commute to the Manhattan Central Business District have been pushed further out by rising housing prices, so they’re traveling longer distances,” says Byron. “But many other people are actually traveling to destinations within their own boroughs, or from one borough to another, and those trips are often very hard to make by transit.” This is the starting point for bike advocacy in low-income neighborhoods: Grounded in necessity and in the context of broader transportation challenges that offer few other alternatives.

This past weekend, dozens of children and families rode their bikes around Flushing Meadows Corona Park, in Queens. Of course we have cyclists here, too, even in my borough’s sad, neglected flagship park, which has in recent years become the poster child for inequality in New York. It’s hardly worth stating that bikes are good things.

However, good things don’t exist in a vacuum. This has been true in throughout the history of New York City, and it’s still true now. There are those here now who view the advances in urban biking with weary indifference or half-articulated hostility. They are unsure about what bikes have come to represent. There is the sense that this entire campaign was separate from us all along — one that began without us and might very well be ending without us.

Jefferson Mao is an urban planning student. He runs the news and commentary blog Flushing Exceptionalism.