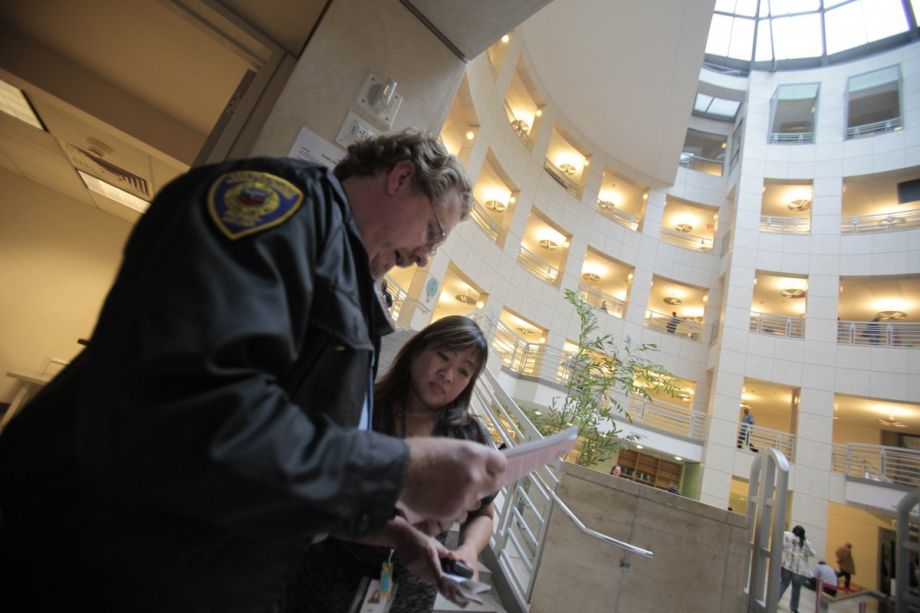 Leah Esguerra, right, a social worker at the San Francisco Public Library, goes over a list of homeless people that had checked in with grounds patrolman Paul Little in San Francisco. (AP Photo/Marcio Jose Sanchez)

Before 2009, the San Francisco Public Library’s bathrooms often became spaces of contention, with security staff escorting patrons out of the library, sometimes arresting them if they were found bathing, sleeping or injecting. But that year, the library hired the first library social worker in the United States, Leah Esguerra, marking a shift in attitudes that have since spread to library systems across the country.

“The idea was to reach out in a way that’s compassionate,” says Esguerra. “We have security, but the role is different.”

Starting from Esguerra, the San Francisco Public Library now has a team of Health and Safety Associates (now known as HASAs) who use the bathrooms as outreach space. HASAs have since expanded their work outside bathrooms and provide outreach on all seven floors of the main branch. They also work at other branches to support staff and inform patrons about resources and services. The program has placed at least 130 patrons into stable housing, Esguerra says.

San Francisco’s experience directly inspired change at the Denver Public Library. In 2012, the Homeless Services Action Committee — an internal working group with the Denver library — made recommendations to add a social worker to staff. The library eventually hired social worker Elissa Hardy in 2015 to begin building the library’s Community Resource program, bringing on additional social workers and peer navigators. The program has gone from serving 434 library customers in 2015, when it was just Hardy, to 3,500 served in 2018.

And across the country, there’s been increasing discussion of how libraries can address homelessness and mental health issues. A 2018 report by the Chicago Tribune estimated there are now more than 30 library systems across the country with full-time social workers.

“In social work we have this term called a ‘protective factor,’” says Hardy. “The library is a protective factor for people, which is basically a place or a thing where we’re helping to support people, and not change things negatively for them.”

One of the key lessons from San Francisco and Denver so far: as much as possible, hiring peer navigators and HASAs who have come with lived experiences of homelessness and other adverse life challenges, making them uniquely qualified to do outreach at the library.

“Some [HASAs] were [first] outreached at the library and linked with services,” Esguerra says. “Then they came back here to work.”

Hiring people with lived experiences of homelessness and other challenges set the tone for both programs. “It’s empowering our staff members who are closest to the situation,” says Rachel Fewell, central library administrator for the Denver Public Library. “Our peer navigators come up with the most innovative ways to meet the needs of our customers.”

Similarly, in San Francisco, each HASA’s own stories play into outreach work. “When appropriate, they tell their own personal stories of how they used to be in the same situation, they recovered from homelessness, and now they’re working and giving back to the community,” Esguerra says.

She adds that bringing HASAs on staff often shifts misconceptions of homelessness. “Now, staff are working side-by-side with people who identify as formerly homeless, but they look just like you and me,” Esguerra says.

Creating a diverse outreach staff has prompted a culture shift at both libraries. “It’s one of the outcomes that was not planned,” Esguerra says.

Funding has remained an issue, however. Working as a HASA is not a full-time position, so Esguerra’s team requested job training skills from the San Francisco Public Library to begin transitioning to full-time jobs. The library has helped placed a number of HASAs in civil service positions as counselors, according to Esguerra. Another, she says, started a licensed street food business.

The impact is starting to go beyond clients reached and cultures shifted within the library setting. In Denver, the social work and peer navigator outreach now translates into policy advocacy. For example, outreach work revealed that social workers were unable to place someone in a domestic crisis and in need of a safe shelter. “We do not have enough beds in Colorado for this,” Hardy says. “It’s become a huge need that we will need to talk to policymakers about.”

Hardy and her staff serve on various committees through Denver; she serves on a committee tackling opioid and other substance abuse. “We didn’t have good ways to get people into treatment,” Hardy says. “We’re working systematically on making changes to that process and to provide treatment on demand.”

“These two disciplines, librarians and social work, come together so beautifully — we can look at these issues from two different angles,” she says. “We’re getting out there, talking to these decision-makers, and advocating.”