In the city that never sleeps, there’s at least one thing that closes too early — the libraries.

Center for an Urban Future found that of all the counties in the state of New York, the city’s public libraries are open the fewest hours per week compared to any other county but one, Erie County. The study also found that when compared to operating hours in many of the nation’s other large cities, such as Los Angeles and Chicago, New York City’s libraries don’t shine.

“We find that New York’s public libraries fall into the bottom half of large urban libraries nationally when it comes to service hours,” the report notes. “Out of the country’s 10 largest cities, New York ranks 7th.” 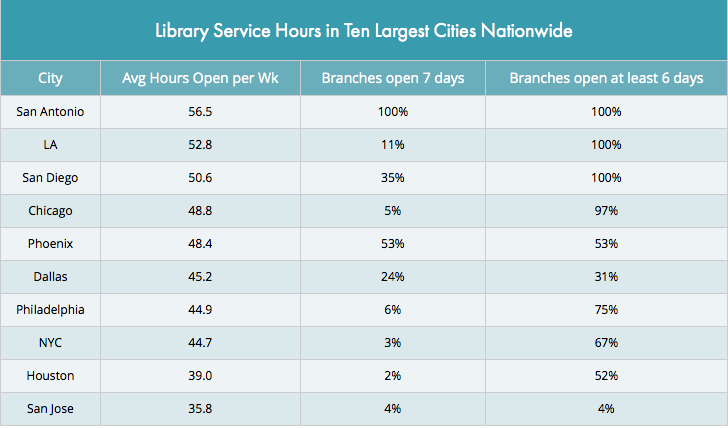 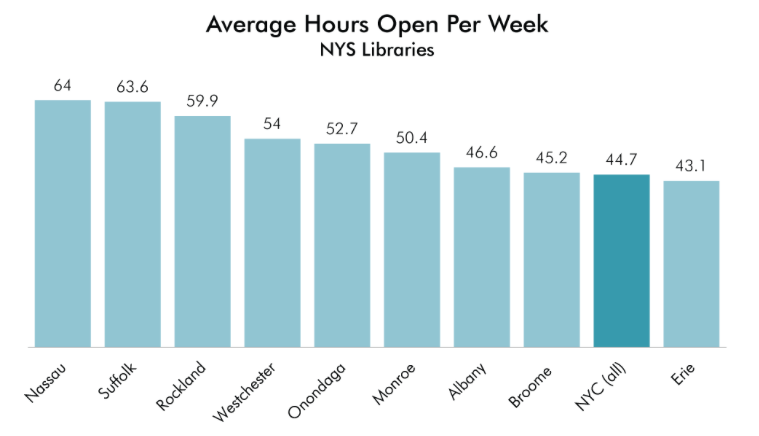 The Bronx leads the way for the five boroughs with an average of 47.9 open hours per week. Even at the city’s highest average, it still pales in comparison to many N.Y. counties. The lowest number of posted library hours in the boroughs comes from Queens, with 40.9 hours.

Only 3 percent of New York City libraries are reported to stay open seven days a week, compared to 90 percent in Suffolk County and 88 percent in Rockland County. In Queens, only 29 percent of the libraries stay open six days a week, which means weekend study and research time is looking pretty dim for Queens’ students and young people.

At a time when many U.S. libraries are going high-tech to change the image of what’s often thought to be a fusty institution, and serving as inspiring centers for career training in communities, New Yorkers are left worrying about closing time.

According to the report, “when libraries have to close early in the evening and on the weekends, fewer working families are able to take advantage of their resources, including not just books but classes and workshops. As Mayor de Blasio and the City Council negotiate a new budget, bringing the city’s library hours more in line with their peers across the state and country should be a high priority.”

The Center for an Urban Future also released a report last fall detailing the dismal shape of the city libraries’ structure, amenities and resources, and advocated for the general need for an overall reform to the institutions. According to the Wall Street Journal, the city’s capital plan now includes $566.1 million for libraries.