Brooklyn Navigates the Condofication of the Public Library – Next City

Brooklyn Navigates the Condofication of the Public Library 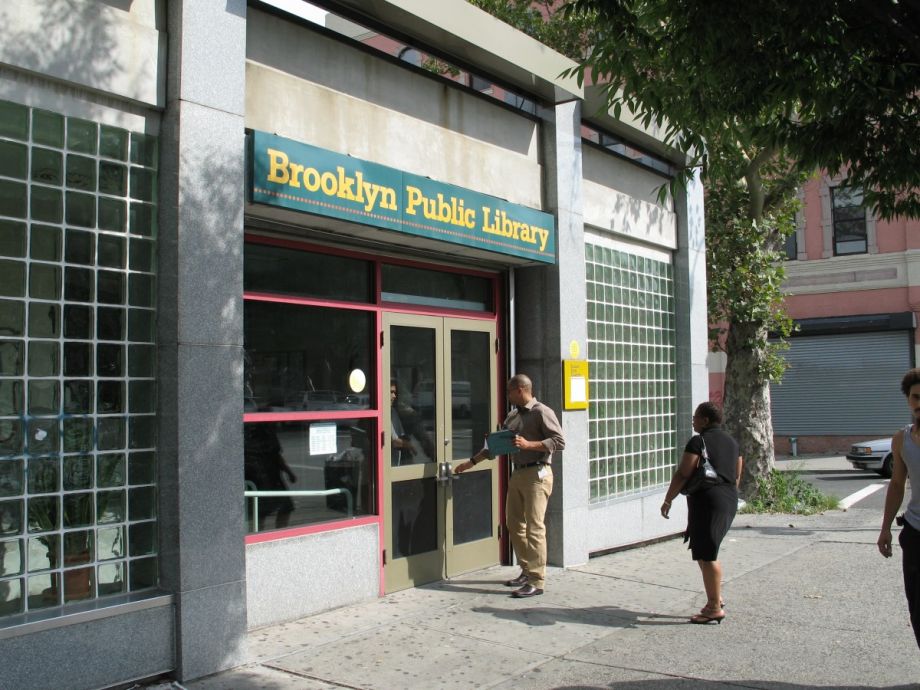 A proposed plan to sell a Brooklyn Public Library branch to a nonprofit developer has raised questions about the future of libraries and the privatization of public space since it was first proposed in 2006. This fall, it started moving through New York’s uniform land use review process (ULURP). If the deal is approved, BPL would sell the outdated and overcrowded Sunset Park branch to developer Fifth Avenue Committee (FAC), which would construct a library twice the size of the original, with 49 units of permanently affordable housing on top.

Sunset Park is growing and gentrifying rapidly. The New York City Comptroller’s office recently found that the population grew 34 percent between 1990 and 2014, double the rate of the city as a whole. At the same time, median rent has gone up by 63 percent while median income has only increased by a quarter. According to Michelle de la Uz, executive director of FAC, no new affordable housing for families has been built in the neighborhood in the last 15 years (though some senior and supportive housing has).

With such rapid population growth, the Sunset Park branch has been stretched to its capacity, says David Woloch, BPL’s executive vice president for external affairs. BPL and other borough library systems receive some public funds, but they aren’t officially part of the city. With public funds increasingly harder to come by, many of BPL’s 60 branches are in need of repair, with problems related to air conditioning, boilers, roofs, and broken or outdated elevators. In total, BPL branches have about $300 million worth of unfunded capital needs.

They also haven’t had the funding to evolve. “These are 20th-century libraries that were not designed and built for modern-day library service,” says Woloch. Libraries were once more transactional places, he says, that performed only a few functions: loaning books, providing space for quiet reading. “Now people access information in all kinds of ways, including more collaborative work with each other, and our libraries tend not to have space for that,” he says.

The Sunset Park branch faces all three major issues: It needs about $5 million in repairs, it’s outdated, and it’s too small. “Walk in any day of the week and on the one hand it’s an inspiring scene” — every seat is taken, people are using the computers, children are reading books, just what you’d want to see in a library — “but on the other hand it’s just way too crowded,” says Woloch.

In this climate, selling libraries to developers who will in turn update and expand them has become an attractive proposition, even as it’s drawn the ire of some residents. If approved, the Sunset Park deal would be only the second deal of its kind for BPL, and the first to include affordable housing on site. The first deal was offered to a for-profit developer to redevelop the Brooklyn Heights branch into a market-rate apartment building with a library on the ground floor. (The developer was also required to build affordable housing off site.)

In both deals, the city would sell the property and then buy back essentially a condo share in the new building. Thus, while the city wouldn’t own the building, it would own the library. Even if the Brooklyn Heights or Sunset Park buildings ever changed hands, the library would remain in city ownership.

In Sunset Park, the FAC housing would also be permanently affordable for households between 30 and 80 percent of area median income, with about half of the 49 units reserved for community members. (de la Uz says she wishes the city required more affordable housing units to be reserved for people already living in the neighborhood, but that’s another story.)

Because FAC would leverage public money and tax credits to create the affordable housing, it would only cost BPL about $10 million to replace the library, as opposed to $20 million to knock it down and replace it from scratch.

Some of that money will come from the sale of the Brooklyn Heights branch, which netted the city $52 million — $10 million to $12 million of which will be used to fit out the new library, and about $40 million of which will go to other library projects around the borough. But it also raised eyebrows among federal and city prosecutors: The developer, a friend of Mayor Bill de Blasio, won the bid despite submitting an offer $6 million lower than a competitor’s.

Such news fuels groups like Citizens Defending Libraries, which protested the Sunset Park deal. In a testimony submitted to Brooklyn Borough President Eric Adams, the group’s founder, Michael D. D. White, questioned what he perceives as conflicts of interest among city staff and the developers. He also suggested that the deal would remove the library from the public sphere. “The proposed replacement library, stuck underneath a privately-owned residential building can never grow in the future,” he wrote. “That would not be so if the proposal were instead to build a publicly-owned, public purpose office building.”

In a 2015 New York Times article about an earlier hearing on the Sunset Park project, columnist Ginia Bellafonte wrote that in the post-Bloomberg era, all development affecting public assets seems suspect, but she comes down firmly on the side of the project. “Demonstrators were on hand to denounce ‘gentrification’ and stand up for libraries, even though the project at the center was conceived to forestall the former and vastly improve the latter.”

Woloch says he understands that those protesting the deal are acting out of concern for the libraries, but admits, “If we just wait for public funding to solve all our problems, that’s not necessarily going to happen.” Over email, de la Uz says that the project has become a microcosm of sorts. “Residents in this community have had limited opportunity to weigh in on individual projects in the neighborhood. As a result, our project is the place where a number of fears and/or questions about development in general are being expressed,” she writes.

The Brooklyn Heights branch is slated to begin construction this fall, and will take 3.5 years to complete. The Sunset Park branch has already cleared one hurdle — a yes vote from the community land use committee — and will finish up the ULURP process in 2017. Agreements are in place to house both libraries in temporary locations during construction.

Starting in December, the library will begin conversations with neighborhood residents about what they would like to see in the new branch: more technology, more collaborative workspaces, more room for kids? These two branches would be the first opportunities in decades the BPL has had to build a library from the ground up. “It would be great if all sorts of public and private funders were writing us big checks. It would make it easier to not only take care of our libraries but to expand and build new ones,” says Woloch. Without them, the library is wading into untested waters.