Atlantic City Gambles on the Pop-Up – Next City

Atlantic City Gambles on the Pop-Up 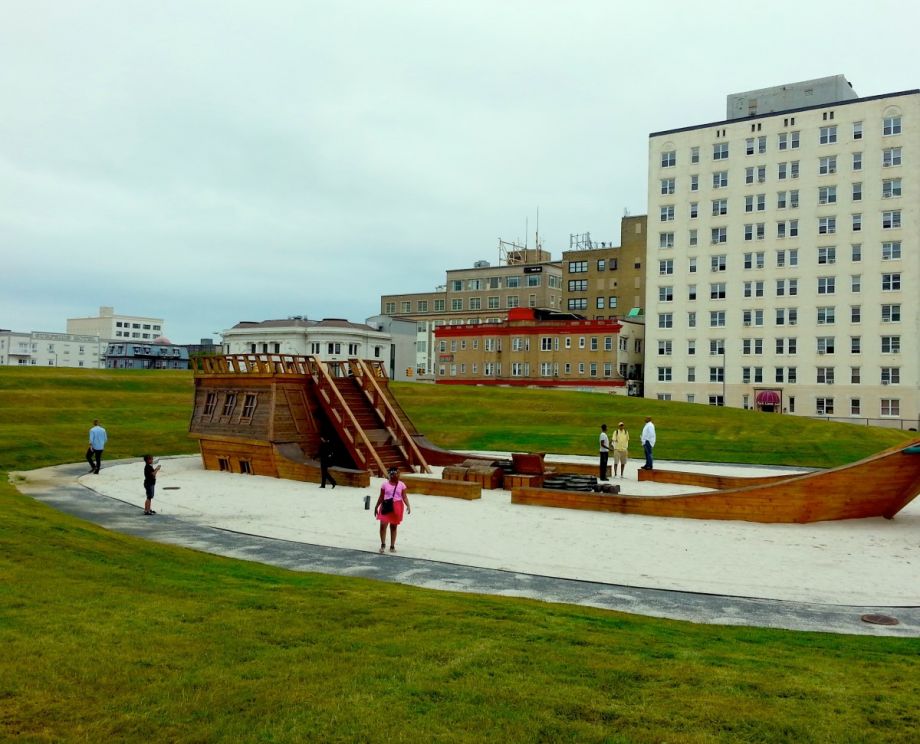 “I was out there in a Prada suit pulling weeds,” he says, explaining to a table of journalists how a recent rainstorm forced a last-minute cleanup on one of the public art installations he was brought to this struggling gambling town to create.

Fung’s project, “Artlantic,” is Atlantic City’s five-year, $13 million take on the pop-up park trend transforming asphalt lots across the country. Sponsored by the gaming revenue-funded Casino Reinvestment Development Authority and its non-profit marketing partner, the Atlantic City Alliance, these curated art spaces are part of a broader effort to make the declining gaming capital known as something other than a place to squander pensions amid blinking lights and buffet tables.

In the first phase of Artlantic unveiled last year, Fung worked with his collaborators to create a figure-eight-shaped art park on a seven-acre lot that had sat vacant since its last tenant, the Sands Casino Hotel, was imploded by its bankrupt owners in 2007.

Cleverly designed by the prominent New York landscape architecture firm Balmori Associates, the park consists of undulating berms bookended by two earthen mounds intended, Fung says, to riff on the boardwalk’s iconic dipping-and-rising roller coasters. They also, maybe, recall the dunes they mimicked when they survived Hurricane Sandy’s harsh waves and winds in the fall of 2012, six months before opening in the spring 2013.

The mounds, made from hundreds of pounds of trucked-in dirt and 22,000 sod staples, are a fun touch, working something like an amphitheater blocking out the concrete glare of nearby casinos, while also reminding visitors that they are indeed in the throes of a fabricated environment wherein developers can manifest a green hill on an empty lot just as they can channel the Taj Mahal on the façade of a windowless box.

Strewn atop the hills are 23 boldly colored light boxes shaped by conceptual artist Robert Barry into words, among them “ Becoming,” “Continue,” “Imagine,” “Believe” and “Inspire.” At night, the sans serif words glow in the dark.

Anchoring the mound closest to the boardwalk is a garden created by artist Kiki Smith to surround one of her bronze sculptures, which is on borrow from her own garden in New York. Smith’s sculpture, Her, depicts a naked woman carrying a dead doe over her shoulder like a sleeping child.

Her, a bronze sculpture by artist Kiki Smith, is featured in the Artlantic park. Credit: Fung Collaboratives

“Not everyone totally gets that one,” says Fung, a charismatic curator best known for the major exhibition “Snow Show” at the 2006 Winter Olympics, which had artists and architects including Tod Williams and Billie Tsien, Yoko Ono, Norman Foster and Smith collaborating on large architectural installations crafted out of ice and snow.

“There are very different aesthetics here, especially coming from a minimal conceptual background,” says Fung as he stands on a hideously patterned carpet that is likely ugly on purpose, in order to encourage visitors to gamble more.

It’s an important question that extends beyond the clash of aesthetics. Like many in the new breed of temporary urban projects mixing public art and green space, Fung’s installations are rising on vacant lots abandoned by the market after the 2008 recession. As with others, they still walk the line between acceptance as a part of their surroundings and the sense that they are a clever, well-dressed imposition.

“This is beautiful, but how can more people in the community use it?” says Stephen Jackson, a longtime Atlantic City resident who ran unsuccessfully for City Council in 2008. “Until I saw the gate open here the other day, I didn’t even know I could even go inside. I thought it was some private place for the casinos.”

The disconnect between the project’s planners and the city’s residents feels plain to Dennis Borroughs, another city resident who grew up here and recently moved back. “Does anyone at the Casino Reinvestment Development Authority even live in Atlantic City?” he asks. “There is free jazz on the boardwalk. People who live here go there to hear it. They talk about it. No one talks about Artlantic. The people from the ACA and the CRDA, they have no clue. They come in, park their cars, they work and leave.”

(CDRA Executive Director John Palmieri does in fact live in Atlantic City, though he admits that many of his staff members live outside city’s limits. “People always say that we don’t live here,” he says. “But you know what? We are a state authority, not a small non-profit in the city, anyway.”)

By most measures, the most successful piece in the installation is a 71-foot-long climbable wooden pirate ship by the Russian-born, New York-based artists Ilya and Emilia Kabakov. On our visit, a toddler can be seen pacing contentedly across the boat’s cedar bow, sucking a pacifier as he looked out beyond the park’s chain-link fence. Another set of kids, siblings, race across the boat’s hull.

“Locals call it ‘the playground,’” Fung says. “That’s a success for us. We are creating a legacy of public space.”

Except for the fact that the space is not quite public. It has a private owner who allows Fung and the gang to use it until the market demands it back, likely for another hotel or retail project. “No one predicts another casino getting built anytime soon,” Palmieri says.

Aside from the ownership problem, there is again that issue of targeted audience and intent. Fung is sincere in his desire to see Artlantic engage the people of Atlantic City, residents, workers and tourists alike. He and his team, Fung Collaboratives, have led Atlantic City high school students on field trips to the Metropolitan Museum of Art. They’ve done educational activities at the installation and seem to be doing all they can to invite people in.

“Two things I said I’d never do, a fountain and a mural,” Fung says. “But when you reduce it down, that is what we have. Now though, I think that’s okay because we are reaching people, we are engaging the people in this community.”

Unfortunately, that message doesn’t seem to have quite settled in with Artlantic’s local backers, who still seem to see the project as a draw for tourists.

“Our job is reimagining Atlantic City,” says Jeff Guaracino, the alliance’s chief strategy and marketing officer. “People want to come home with experiences that they can share and talk about, something that’s not generic. Art… can be a trigger to catalyze growth. We need to develop that side of Atlantic City.”

But to think that Atlantic City could become the next hot boho beach spot is to basically ignore reality. To visit AC, as Guaracino’s group busily tries rebranding the city, is to understand how all-consuming economic development trends can be. Before the state of New Jersey, in 1976, opted to legalize gaming on the resort town’s fast-fading boardwalk and take advantage of the ban elsewhere (riffing on its 20th-century boom days during Prohibition, perhaps), Atlantic City was, like any number of small, old cities, no longer in its prime. It had old buildings, old families with old money and, perhaps most importantly, a macho sense of its own identity as the bootlegging bad boy of the Jersey Shore.

Casinos wiped all that away, taking down charming, if ramshackle, Victorian mansions for hotel-entertainment complexes designed exactingly to keep visitors from exiting their doors. Massive parking structures popped up everywhere. Middle-class residents left the city in droves, resettling in quiet suburbs nearby and leaving the city for the casinos and its service-industry workforce. In exchange, the city believed it had gotten the golden ticket to economic stability, if not prosperity. And for a while, it had. That moment, however, like that of Enoch “Nucky” Johnson, ended.

These days, anyone jonesing for the quick adrenaline of the roulette wheel has options within a few hours’ drive of Atlantic City, including casinos in Pennsylvania, New York and Maryland. Meanwhile, the Atlantic City boardwalk is a mess of massage parlors, t-shirt shops and fast-food stands. Occasionally, there is a woman wearing a thong-bottomed Cleopatra costume handing out drink tickets. One major development win of the past several years was the opening of a Margaritaville and several other kitschy themed bars on the Boardwalk, also subsidized by the CRDA to the tune of $12.5 million.

The city’s bind may be most tellingly illustrated by the story of Revel, a lavish hotel that thought it could survive as a higher-end resort destination without relying on gaming as a major revenue generator. Ten months after opening at the end of the boardwalk, the curvy, glass-fronted Arquitectonica-designed hotel went bankrupt. After emerging under new leadership, it decided to expand its casino offerings and end its facility-wide ban of smoking. (Casinos are among the last indoor spaces in the U.S. where smoking is encouraged, as it helps the bottom line.)

Gaming and its attendant industries — chain restaurants, bars and lowest-common denominator entertainment — run the city. “We cannot be the elegant salon resort,” Palmieri says. “We rely on middle-class, working-class people.”

Which is to say that that providing attractions, like Artlantic’s pop-up parks, that don’t involve spending (or gambling) money is all the more necessary, for both the tourists and for Atlantic City residents, 30 percent of whom live below the poverty line, with 80 percent of employed adults working for the casinos.

But meaningful engagement means more than a few educational outings and an open gate. If Atlantic City is serious about building its creative economy, it must look to its own residents to lead the process. The city must prioritize locals for the jobs still to flow from the $13 million Artlantic project. For the $2.5 million installation on the former Sands site, 80 percent of the fabrication and construction budget was spent on hiring locals to do the labor, says Fung. That is great news, but, I don’t only mean the jobs of trucking in supplies and clearing lots — which, for the record, were done largely by volunteers from the local labor union, in addition to paid local workers.

Importing non-local artists, no matter how brilliant, likely won’t encourage the long-term cultural shift and population growth the city needs to attract the creative economy envisioned by Guaracino. None of the artists included in the first phases of the 5-year project live in Atlantic City. All of the art featured so far was created by white artists, despite the fact that Atlantic City is nearly 40 percent black.

Artlantic represents the start of a movement toward a more diversified economy for Atlantic City. That is a good thing. But just as the pyramid on the outside of the Trump casino isn’t the start of Zoroastrian revival in town, Artlantic is not the beginning of an art scene.